This year I have the great honor of being a member of the American Library Association’s national committee to pick the best genre books of the year for the award called The Reading List. I am spending my year reading brand-new books in seven different genres and am, along with my committee members, trying to find the year’s best-of-the-best in Romance, Fantasy, Science Fiction, Women's Fiction, Historical Fiction, Mystery and Horror.

I thought I would begin with Horror since, until I started on this committee, I was sure I didn’t like horror. Imagine my surprise when I found that Horror has grown and now includes many categories that I had never thought of before. In fact, I find that I am really enjoying many of the books I’ve been assigned to read, especially the post-apocalyptic stories.

Now, after reading these novels, my biggest question has become “Why are the only survivors of an apocalypse always under the age of 25?”Granted, I have taken Facebook quizzes that suggest I have the survival skills of a kumquat but really, is it so much to ask that I be allowed to survive the apocalypse so that I, too, can be eaten by horrific, genetically engineered bugs?

Without further ado -- and in alphabetical order -- here's my list of the year’s best Horror, along with links to the books in our catalog, when applicable.

Darkness on the Edge of Town by Brian Keene – One day, the darkness comes, and whoever leaves the town of Walden, Virginia, is never heard from again. Robbie and his girlfriend, Christy, try to make the best of it, but as the darkness starts to call out to the remaining survivors, the entire town starts its inevitable descent into madness. If you like the creepiness of a Stephen King novel, you should like this book.

Dweller by Jeff Strand – When Toby was eight years old, he found a monster in the woods. Instead of eating him, the monster seemed to want to be friends. Bullied in school and with no other friends to turn to, Toby befriends the monster. Unfortunately, when Toby is in high school, their friendship starts to take a dark and disturbing turn in this intriguing horror novel about friendship between a monster and a boy.

Feed by Mira Grant – The world has changed with the advent of the zombie uprising. While traditional news reporters were still debating whether or not zombies existed, bloggers were blogging about how to save yourself and destroy the zombies. Now bloggers are at the cutting edge of the news reporting business, and twins Georgia and Shaun Mason are leading the pack (and the ratings). After they’re selected to become the official bloggers reporting on presidential candidate Peter Ryman, Georgia starts to notice that an unusual number of Ryman’s supporters have been infected and have turned into zombies. As she investigates, she and her brother find that it is a conspiracy on a national scale. Now they just have to get the story out before they also become the undead.

Horns by Joe Hill – One day, Ig wakes up and discovers that he has grown horns. Ig’s life has been miserable since the day he was blamed for his beloved girlfriend’s murder, so the horns are not the worst thing that has ever happened to him, or so he thinks. Unfortunately, most people can see the horns and start to share the most alarming things about themselves. As he runs into strangers, friends and family, he finds out their most horrible thoughts and secrets, including how they really feel about him, their part in the destruction of Ig’s life and who was really responsible for the murder of his girlfriend.

I Am Not A Serial Killer by Dan Wells - John Wayne Cleaver is certain he is destined to become a serial killer. After all, how else do you explain his name? Or the fact that he doesn't understand empathy and thinks about killing, a lot? Still, he doesn't particularly want to become a killer, so he develops rules for himself. For example, when he finds himself stalking someone, he has to ignore them for a whole week. When someone makes him angry, he compliments them. These tricks seem to be working, until a series of gruesome murders suggest he’s not alone, and John decides to let his own monster come out to play. Supernatural elements and unexpected plot twists keep you enthralled throughout this clever novel. This has a Darkly Dreaming Dexter feel, but the supernatural elements make this a very different book.

The Passage by Justin Cronin – Anytime the Federal government decides to use convicts to test their newest experimental cure for cancer, you can be pretty sure that something will go horrifically wrong. In this case, creating a race of vampire-like creatures with superhuman strength and absolutely no morals in their barely functioning brains does seem to fit the bill. As a small band of humans sets off to find help for their failing home designed to keep these new predatory creatures at bay, they stumble across a young girl who might hold the key to saving all humanity. A new twist on vampires that I thought was a winner.

Sparrow Rock by Nate Kenyon – Pete and a group of his high school friends visit a friend's grandfather's bomb shelter to enjoy some illegal substances. When they open the hatch, they find that a series of nuclear bombs has detonated, destroying the world as they know it. They promptly retreat to the bomb shelter to wait it out. Unfortunately nuclear fallout is not all they have to fear… 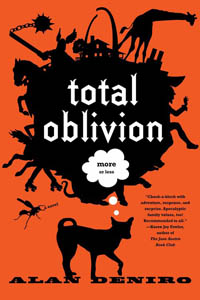 State of Decay by James Knapp – In a future America, technology has made it possible to reanimate the dead. People can sell their death rights in exchange for a better life. These “revivors” are then used as soldiers in various wars and police actions around the world. Unfortunately, when an unregulated underground operation turns unwilling victims into revivor sex slaves, Nico Wachalowski is sent in to investigate. This is a wildly inventive first novel from an author to watch.

Total Oblivion, More or Lessby Alan Deniro - Macy Palmer is just trying to survive high school when her world starts to change. Electronic devices stop working, a mysterious plague starts killing neighbors, and men on horseback attack the city. When her family decides to flee, things really start to get weird as it is discovered that America has been invaded by ancient Romans.

And for good measure, a fun horror movie…

Zombieland (2009) – A zombie infestation has taken over the United States, and four rather odd people band together to get to California, where they’ve heard they’ll be safe from the zombies. During their travels, they have to learn to depend on each other to survive. There are obnoxious characters and much killing of zombies with assorted tools, guns, hedge clippers, and a special guest appearance by Zombie Bill Murray. What's not to like?

Alicia Ahlvers is branch manager at the Kansas City Public Library's Waldo Community Library and has been with the library for 15 years. She is active in the American Library Association and has served on both the Notable Books Council Award committee and The Reading List book award committee. She also works evenings and weekends for UMKC Miller Nichols Library.