Some locations are experiencing closures or changes in hours during the COVID-19 pandemic. Check our locations page for details

I’ve known a Tom Sawyer or two in my time. I’m willing to bet a marble and a pinch bug you have, too. Although Mark Twain doesn’t explicitly describe him, I can tell you that Tom’s sparkling eyes are framed by the kind of thick, long lashes that completely distract you from his sometimes questionable shenanigans.

When he flashes a smile at you, it’s as if the clouds have parted to reveal a perfect sunny day when you hadn’t even realized it was cloudy. And even though he might have just blithely led you into a very dicey situation indeed — such as deeply lost in a cave — Tom’s courage, indomitable spirit and resourcefulness will always rise to the challenge and save the day.

Tom is the most good-natured delinquent you’ve ever met, and his enthusiasm, like his imagination, is boundless, along with his sensitivity, recklessness, brashness, audacity, carelessness, and any number of other adjectives. I have to add that I speak from personal experience when I say that Becky Thatcher is not the only girl who has been driven to stamp her foot in sputtering frustration by Tom’s headstrong nature.

If Tom’s brother Sid might be understood as one side of the archetypal “senex,” or old man (Sid might be a goody-good kill-joy, but he’s the only one Tom can’t fool), then certainly Tom Sawyer is the eternal “puer,” or boy, utterly vital and open, as only youth can be.

As such, I like to think that Tom Sawyer also embodies the American spirit of the 18th and 19th centuries, and of the people who emigrated and populated its frontiers. Not able to live within the constraints of Old World institutions and rules, they mustered their own brash “Oh yeah? Just watch me do it!” attitude and audaciously crossed an ocean and set out across a new land, forming their own rules and a new government along the way.

They looked upon their European cousins with as much disdain and distrust as Tom has for fancypants Alfred Temple, and never backed down from that fight, or any other fight. Like Tom, and another character from great American literature — Laura Ingalls’ beloved Pa from the Little House books — they were restless, resilient, ever resourceful, and at home in nature.

However, along with their strong streak of rebelliousness, Tom and his American brothers were also centered by an unshakeable sense of justice. If Adventures of Huckleberry Finn delves into the shadow side of the early American experience, then The Adventures of Tom Sawyer encapsulates its youthful wonder, and the thrill of adventure and new discovery.

“Nobody loves me, everybody hates me, guess I’ll go eat some worms…” Taking a cue from the Campfire Songbook, Tom and Joe Harper, his best friend and current soul mate in misery, decide to run off, live a life a crime and piracy, and in the process make them sorry — “them” being primarily Becky Thatcher and Joe’s mother. Along the way they enlist the ever accommodating Huck Finn. Absconding at midnight (which everybody knows is the outlaw hour) with a boiled ham, side of bacon, skillet, tobacco, fire, and raft, the newly christened Tom Sawyer, Black Avenger of the Spanish Main, Huck Finn the Red-Handed, and Joe Harper, Terror of the Seas, skillfully navigate the Mississippi “high seas” and make port at Jackson’s Island.

Once they are settled in with bellies full of bacon and corn pone, Tom gleefully embraces a life free of getting up in the mornings, going to school, washing, “and all that blame foolishness.” Before settling into sleep, Joe admits that Tom’s life of piracy is a much better deal then his own suggestion of a woeful life of hermitism.

Awakening early the next morning, right in the midst of “Nature’s meditation,” Tom’s attuned senses don’t miss the movement of a single worm, ant, lady bug, tumble bug, cat bird, jay, butterfly, or fox. Tom finally awakens his fellow pirates, and unfazed by the discovery of their missing raft, they quickly fish enough catfish for a family and make the age-old discovery that hunger, combined with completely fresh, self-caught game makes for the most delicious fare ever.

Fortified, they explore the rest of their new island home, stopping frequently for a swim. An afternoon rest brings on a bout of homesickness. This however, is dispelled by a distant “booming” sound, which the boys soon discover is cannon shot from the town ferry in an attempt to dredge up a drowned body in the river. Who could have “drownded,” they wonder excitedly, regretting missing out on such rare town excitement. “Boys, I know who drownded,” Tom deduces — “it’s us!” However, the boy’s initial jubilation in their mission’s success — indeed “they” were sorry now — later settles into misgivings, especially for Tom and Joe, knowing full well just how sorrowful some people were.

Tom shoots down any plans for a quick return, however, as usual having a secret new plan of his own. As soon as Joe and Huck fall asleep, he writes two notes on a piece of bark, leaving one for Joe, and pocketing the other, and then sneaks off like a thief in the night. He couldn’t be abandoning his fellow outlaws? Could he?

Tom covertly stows away on the ferry’s last river crossing of the night and then runs through the town’s alleys to sneak into Aunt Polly’s yard by climbing over the fence. Calling on years of practiced stealth, Tom slips into the house and slides under the bed in the sitting room. Now he can overhear Aunt Polly and Mrs. Harper, with Sid and Mary in attendance, recollecting in full mourning their good-hearted if “mischeevous” boys. He also hears all the details of his own death, as it was speculated, and plans for his and Joe’s funeral to boot.

Although Tom longs to reveal himself to Aunt Polly right then and there, and relieve her of her suffering, he restrains himself and waits for Aunt Polly to fall asleep. He arises and intends to leave her the note on his way out, but then Tom, “careless as a colt,” begins to percolate another idea — a wonderful, awful idea. Smiling, he re-pockets the bark and kisses Aunt Polly before exiting. “Borrowing” another skiff, it takes him the rest of the night to make his way back to the island, arriving just in time for breakfast, and a boastful retelling of his night’s adventure to Joe and Huck, followed by a deep sleep until noon.

The “lost” boys continue to enjoy their time on the island, hunting turtle eggs, and swimming and playing in the buff. Late that next afternoon however, Joe succumbs to his homesickness, and then even a deflated Huck chooses to go back. Tom, despairing of his splendid plan unraveling, runs after the boys as they are leaving and reveals his secret plot to them in a last ditch attempt to get them to stay. Much to Tom’s relief, they agree it’s a wonderful idea, and stay.

After lunch, Tom asks Huck for smoking instruction, and Joe joins in. At first, Tom and Joe enthuse over the pleasure of the pipe, and marvel that it took them so long to take up the skill. Boasting they could out smoke any man in town, they look forward to the time when they can show off their newfound vice to the other boys in school. After a bit, however, Joe wanly declares he’s lost his knife and must go find it, and Tom, just as pale faced, heads in opposite direction to look for his “knife.” Huck finds them both, about an hour later, up-chucked and passed out, and discreetly leaves them be.

At midnight, the boy’s decision to stay on the island is severely tested when a mighty storm crashes about them, and they nearly lose their campfire, not to mention their lives, as their nightly sheltering sycamore tree is hit by lighting. Luckily, they had retreated to the sand bar. Not surprisingly, the boys gamely recover and dry out, although the next day Tom once again has to convince the boys to stay on a little longer. He does this by suggesting a switch from playing pirate to Indian, and by doing so, Joe and Tom take up the pipe again, thankfully for them with much less distress. 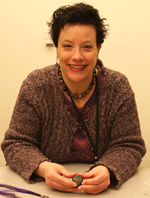 When she’s not assisting customers in the Central Reference department, Jean Rivard DuFresne makes glass beads and designs jewelry, which she sells at riveroflight.etsy.com. She also writes and is a voiceover artist.