Of William Quantrill, the Reverend H.D. Fisher wrote: “In him were represented courage and cowardice; successful leadership, intrigue, cunning, desperation, revenge and hate, all to a marked degree.” Fisher would have known, too – Quantrill nearly killed him.

Lawrence historian Katie Armitage comes to the Central Library on Sunday, August 29, at 2 p.m. to discuss her new book, Lawrence Survivors of Quantrill’s Raid. The event is free and open to the public; RSVP here to reserve a seat.

Though locals who use the term “Border War” today are often referring to the bi-state rivalry between the athletic departments of the universities of Kansas and Missouri, most Kansas Citians have heard of the Lawrence Massacre. In the early morning hours of August 21, 1863, Quantrill, leader of the pro-Confederate irregulars, led his guerrillas into Lawrence to kill as many men as possible and torch as much as they could.

It was the bloodiest massacre in the border conflict between the Southern-sympathizing western counties of Missouri and the Union, represented by both the elected leadership of Missouri and the free state of Kansas. With most of the men away, fighting in the broader Civil War, Lawrence was largely defenseless. When the raiders’ work was finished, nearly 20 percent of the male population of the nine-year-old town lay dead.

But they didn’t get everyone.

According to Armitage, when Quantrill’s men came to kill Reverend Fisher, the Union army chaplain hid in his cellar. The raiders set fire to the house, but Fisher’s wife, Elizabeth, bravely managed to put out the flames and even threw a blanket over her husband as he escaped from the cellar – all the while she was clutching their six-month-old baby.

As the raiders were only after the men, wives protecting their husbands became a theme in the raid story. Mary Baldridge Lane, wife of Union general, and anti-slavery Kansas senator James Lane (who had led a Union raid against the Confederate town of Osceola, Mo., two years prior), stood up for her man after he fled into a cornfield. According to Armitage, when Quantrill’s men came to the door, Mary Lane told them that her husband wasn’t home, but if they came back again, he’d surely be there to answer them. 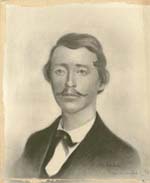 Despite expecting a child at the time of the raid, Elizabeth McMahaon Speer, wife of abolitionist newspaper editor John Speer, put out fires repeatedly set by raiders in her home. Unfortunately, the Speers lost their sons, John Jr. and Robert. Armitage also writes that Kate Riggs saved the life of her husband, Samuel Riggs, a judge who had indicted Quantrill, but Armitage doesn’t go into detail. (For more examples of heroism during the raid, check out this 2004 Lawrence-Journal World article.)

Essentially a photo album focusing on the survivors’ rebuilding of the town, Armitage’s book displays hundreds of historic images along with bite-size facts about the people who went on to establish prosperous businesses and institutions, such as the University of Kansas and the Haskell Institute (now Haskell Indian Nations University).

Quantrill’s raid has been dealt with thoroughly by historians (including Rev. Fisher, whose memoir, The Gun and the Gospel, contains an arresting account of the raid), and Armitage’s book will fit neatly beside other Civil War texts from the region, providing a comprehensive, visual guide to the rebuilding of Lawrence after the worst massacre in the Border War.

Expect an in-depth look at Quantrill’s raid and its aftermath when Armitage discusses her book at the Central Library on Sunday at 2 p.m.