The Iliad may be the oldest narrative work in the Western canon. Homer’s epic focuses on an argument between Achilles, the greatest Greek warrior at Troy, and Agamemnon, the commander of the Greek forces, and the disastrous results of that argument.

What makes this work great? It looks at the serious matter of war, and at the devastating effects of armed conflict. Good men on both sides die, and their families and friends suffer terribly because of their loss. And it raises the issue of the individual and his part in society – to what extent are individual matters, such as honor, checked by obligations to the larger society.

It questions the validity of war – according to legend, the Trojan War began because Paris seduced Helen, wife of Menelaus of Sparta, and brought her to Troy. The Greeks attacked Troy to get Helen back. Stated baldly, that seems a silly reason to go to war. Most readers today would judge Menelaus well rid of his unfaithful spouse. Certainly his marital problems do not directly affect most of the Greek forces, which have only a remote connection to Sparta.

Achilles, though, after he has been insulted by Agamemnon, begins to question the legitimacy of the war, and his part in it. Agamemnon’s insult of Achilles also involves the taking of a woman. Following the siege of a town near Troy, each of the Greek leaders received a share of the loot, including women who were enslaved when the town was captured. Agamemnon’s prize, a slave girl named Chryseis, had to be returned to her father, a priest of the god Apollo, so as to avert a plague. Rather than accepting his loss, Agamemnon chooses to take away Achilles’ prize, the girl Briseis. Again, a modern reader might think – what’s the big deal?

Though Agamemnon is the commander of the Greek forces, the Greeks are a loose confederation of allies. Achilles and his troops are independent agents, not Agamemnon’s subjects. In addition, Achilles is the best fighter the Greeks have, their star. Technically, Agamemnon has the ability to take Achilles’ prize – as the commander, he oversaw the distribution of loot – but he is taking away something dear to Achilles, which action mirrors what Paris did. And for the Greeks of the heroic age (and for most Greeks in later ages), pride and self-image largely define a person. If Achilles allows himself to be insulted by Agamemnon, he will lose face and status among the Greeks, and that is something no self-respecting hero would allow.

In order to demonstrate his value, Achilles withdraws from the war, and the Trojans start to win – they now have a psychological edge. By his withdrawal, Achilles has shown that he is the best of the Achaeans, and has forced Agamemnon to return his prize with interest.

In a run-of-the-mill presentation, the story would end here – Agamemnon would make amends to Achilles, who has been proven indispensable. And Achilles would rejoin the Greeks and devastate the Trojans. But at this point, Homer takes a different tack. Achilles remains angry about the insult, and the apology, though generous, is not enough. More than that, he has begun to question the whole rationale for war. Why is he fighting for a man who can insult him? Why is he fighting the Trojans at all, who did nothing to him? We also learn that Achilles has a choice of a long life without fame, or a short one with glory. Glory had always mattered to him and he was willing to accept the trade-off, but, if he can be insulted by Agamemnon or any other Greek, what’s the point?

And here, the work turns tragic – not only is Achilles’ decision to continue to remain off the battlefield disastrous for the Greeks – in his absence, all but one of the best Greek fighters is seriously wounded and has to retire from battle – but for himself. His withdrawal leads to personal tragedy. The Iliad shows us that, in war, there are no winners, but suffering all around. 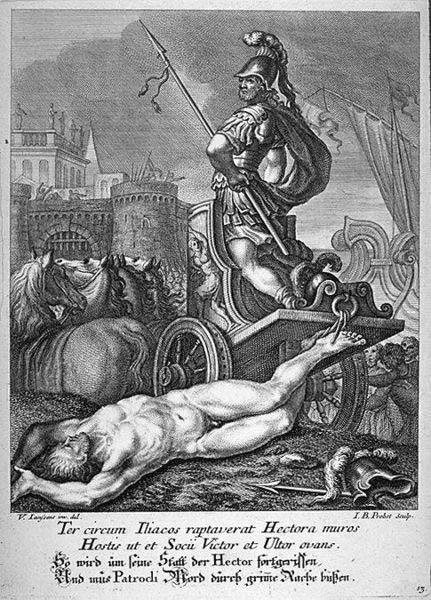 Achilles drags the body of Hector behind his chariot. Engraving by Johann Probst (Wikimedia Commons)

For those not able to read the work in Greek (most of us, I imagine), a good translation is indispensable. The work has been ably translated by Robert Fagles (his version is available in an outstanding audiobook read by Derek Jacobi), Stanley Lombardo, Richmond Lattimore, Robert FitzGerald, and for those who like a challenge, George Chapman, a contemporary of Shakespeare, did the oldest and one of the best English versions.

Bernard Norcott, our resident connoisseur of classic literature, is a Technical Assistant at the Bluford Branch of the Kansas City Public Library.