A book that highlighted the Kennedy-Nixon debates of 1960 caused some debate of its own at a special Kansas City Public Library book discussion of Theodore White’s narrative nonfiction classic about politics, The Making of the President 1960.

This year marks the 50th anniversary of the debates that ushered in modern political campaigning as we know it, and the Library obtained special permission to screen the debates for the public. In conjunction with the screenings, there are multiple discussions of The Making of the President 1960. For the first meeting, White’s classic work of political reporting drew many interested readers who discussed this turning point in American political history and enjoyed comparing it to how candidates run campaigns today.

The first gathering was led by former mayor of Kansas City, Missouri, Kay Barnes. Ms. Barnes started the dialogue by saying she relished the opportunity to reread a classic she first discovered almost 50 years ago. She shared a memory of working in Nelson Rockefeller’s Kansas City campaign office and another about waiting for over an hour on her first election day to cast a vote for John F. Kennedy.

One participant shared a very distinct memory of that long-ago election by recounting an incident that occurred the day after the election. Elizabeth was in the school cafeteria listening to all the boisterous talk about the previous day’s results when another student entered dressed all in black. When asked why she had dressed in this manner, the young woman replied, “Yesterday’s election was the downfall of the nation.” A teacher sternly addressed the co-ed, “Go back upstairs and change your clothes. Today, Kennedy is the president of all the people.” Elizabeth said she recalls that memory the day after every election day, whether her candidate of choice wins or loses.

Facilitator Barnes asked the readers for their impressions of the other presidential candidates. One reader said that all of them seemed rather desperate, except for Nixon. Of the Democratic contenders, he thought that Hubert Humphrey was completely overwhelmed by the Kennedy family’s wealth and connections and that Adlai Stevenson was probably one of the most intelligent men to ever run for president, even though he knew he would lose. 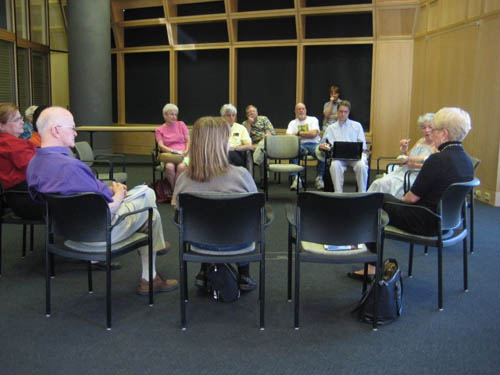 Readers discussed the televised debates and what the public learned about the two candidates. Barnes said that the debates showed the public that JFK could talk about a wide range of issues. Many people felt that JFK had too many strikes against him—Catholic, wealthy, young, and lack of experience. She thought the expectations placed on him were low and that JFK exceeded expectations during the debates.

Participants then discussed how appearance may have affected the public perception of the debates. On reader brought up the point that it’s quite possible JFK’s personal appearance could work against him. Many people viewed Kennedy as over-privileged and entitled and that this may have been a factor for some voters not to vote for JFK, particularly blue collar/working class voters.

Other topics of interest to attendees were fundraising (very little mention of it in the book), the presence of women on the campaign trail (very few), and the ability of the media to zero in on a small vulnerability of a candidate and exaggerate it until it becomes a larger issue.

This book is a timely one for the season and a compelling and readable piece of narrative nonfiction with interesting characters and a suspenseful storyline, even if readers all know how it ends.

Want to join the discussion? Due to popular demand, Barnes is leading a second Making of the President 1960discussion on Tuesday, October 19, at 6 p.m. at the Plaza Branch. There are a few spaces left, but you must call 816.701.3407 to reserve a spot and a copy of the book. (Former mayor Dick Berkley's discussion group on Saturday, October 16, is full.)

Kaite Mediatore Stover is the Head of Readers’ Services for the Kansas City Public Library. She is a regular guest on KCUR's Book Doctors and moderator of The Kansas City Star’s FYI Book Club.

A version of the above article also appeared on Booklist's Book Group Buzz blog.