In 1814, Europe had seen its share of war. The French Revolution and Napoleon had left a trail of death and destruction throughout Western Europe. Great Britain battled once again with the new United States. Many yearned for peace.

Austria, Great Britain, Prussia, and Russia met in Vienna to create a more peaceful order. These countries preferred to meet without a French representative, but one showed up. Other parties such as Sweden, Denmark, and the Papal States came along as well. Royalty, prime ministers, and other heads of state came to represent their nation’s interests and live in close proximity to one another for several months.

The conference, which was scheduled to begin in early October 1814, never had a formal opening ceremony. Instead, in what became standard operating procedure, business happened during the many lavish dinner parties, balls, and theatrical events that went on throughout the conference. Hostesses held glittering salons, trying to outdo one another in entertainment. Diplomacy occurred during these soirees as well as in meetings held throughout the daytime.

Much discussion at the meeting centered on gaining territory for one country or another. Everyone had ideas of who should hold what land mass. All wanted to make their own countries larger at the expense of someone else. 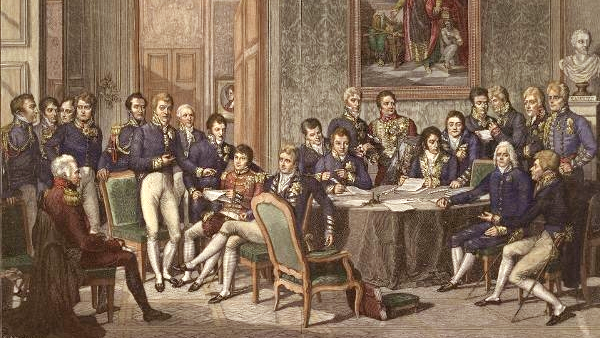 The Congress of Vienna (1819) by Jean-Baptiste Isabey

During the meetings and parties, all worried about Napoleon’s return to France. He did re-take the government and went back on the march. Not long after the conclusion of the Congress of Vienna, Napoleon met his end at Waterloo.

This international conference finally ended in June 1815 without ever formally convening. It ended many territorial disputes, re-drawing the map of Europe and setting country boundaries for over a century. Great Britain gained territory that led to the rise of its empire. Switzerland received its neutrality.

The Congress also dealt with humanitarian issues, such as guaranteeing civil rights to Jews. They also secured international travel on rivers that crossed borders. The Final Treaty brought peace to Europe until the outbreak of the First World War. The Congress of Vienna represented the first time national leaders of Europe had come together to solve disputes and bring change to the European continent.

I enjoyed this work about the Congress of Vienna. The diplomatic maneuverings are fascinating as leaders played one against another to their advantage. It is an interesting look at a microcosm of European history in a book that reads like a novel.

This is a great choice for a history buff or anyone interested in furthering their knowledge or world history and the effects that are still felt today.

What can we learn about negotiating from the Congress of Vienna? Check out a video by BigThink:

Judy Klamm is a reference librarian in Central Reference. She has written book reviews for Library Journal and various Presbyterian publications.