Can You Spare a Few Minutes for Some Local Bowling History?

Drew Bodner grew up in Kansas City in the 1940s and ‘50s and has vivid memories of a still-popular American pastime: bowling.

His were the days when pencils were used to calculate scores and human pinsetters picked up the pins after each throw and rolled balls back to the players. Bodner recalls many alleys scattered around town at that time, but said he usually bowled at Tierney-Wheat Recreation at 3736 Main Street. He remembers one lane in particular, where players routinely stomped on a specific floorboard to help direct the trajectory of the ball towards a strike.

These memories led him to ask KCQ: What’s the history of bowling alleys in Kansas City?

Bowling first appeared in the metro area in the late 19th century. Advertisements for bowling alleys in the city proper and in Wyandotte (what is now Kansas City, Kansas) were printed in The Kansas City Star and Times as early as 1884, though only a few details about them are available today. They were often found in saloons or bars, billiards rooms, clubhouses, parks, and other entertainment areas. Most indoor alleys were in basements. Others were likely outside on grass.

By the 1920s, bowling had grown into a fully organized sport. The number and quality of lanes increased, numerous teams and leagues frequented their favorite spots, and the Greater Kansas City, Missouri Bowling Association served as coordinator of tournaments and the local chapter of the American Bowling Congress (ABC). 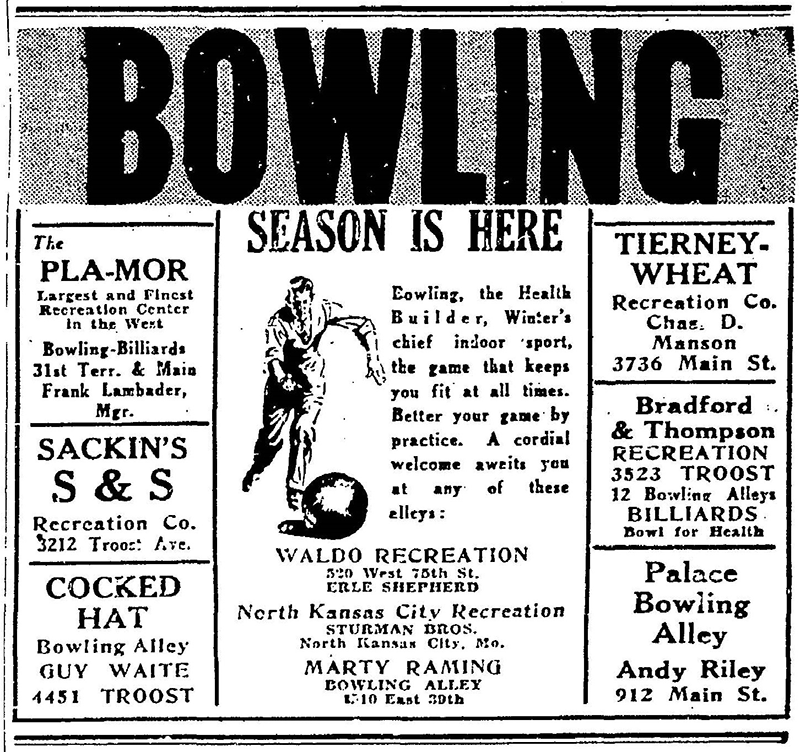 The Pla-Mor might be the most famous example of early local bowling alleys. Its main attraction from the 1920s into the ‘50s was a massive ballroom promoted as one of the largest dance floors in the country. Along with 16 bowling lanes, it offered an ice rink that doubled as a swimming pool in the summer, billiards and pool tables, a café, a barber and beauty shop, and a roller skating rink. But in the early 1950s, as the popularity of dancing declined and participation in bowling increased, the ballroom was converted into 54 state-of-the-art lanes.

Bowling continued at the Pla-Mor until 1966. After a brief stint as a rock concert hall in 1970, the building was razed to make way for a car dealership in 1972. 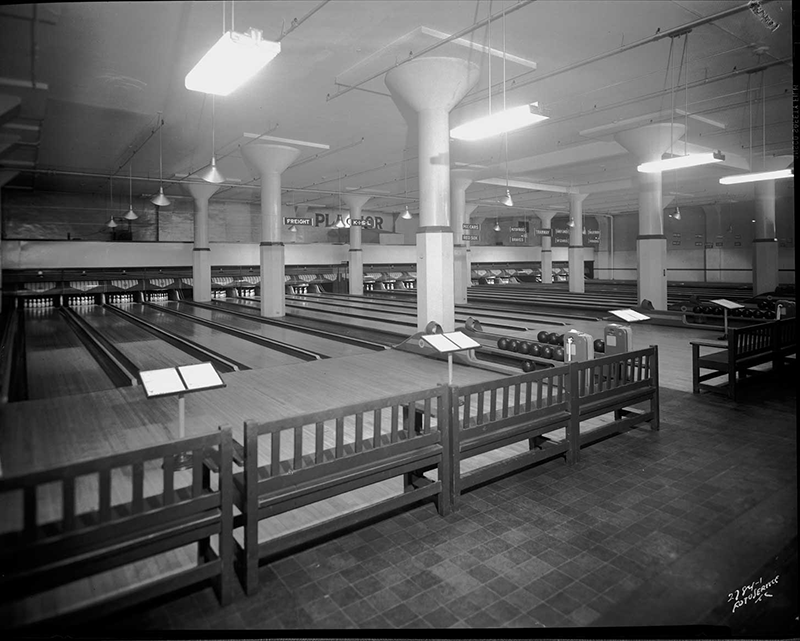 The Pla-Mor's expansive new layout and amenities were mirrored at the area’s other bowling alleys. Large buildings with more than 20 lanes, air conditioning, lounges, bars, restaurants, meeting rooms for teams and leagues, and ample surface parking sprang up from the 1940s through the ‘60s. 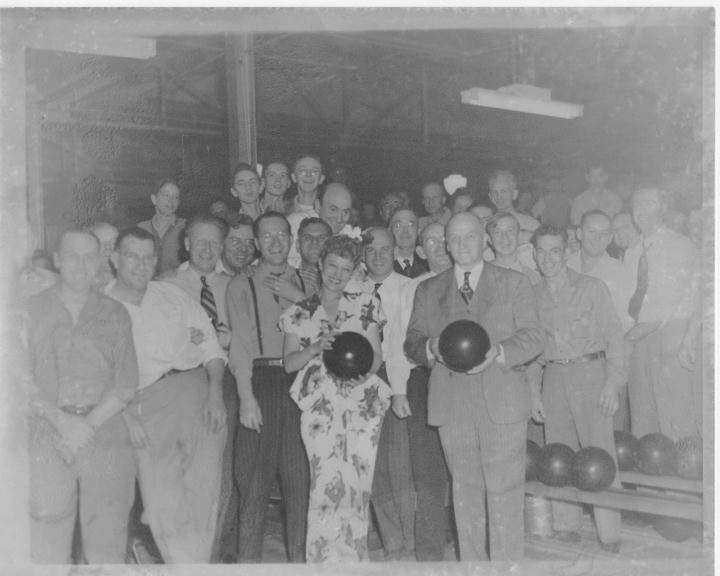 The rising popularity of bowling leagues led to larger, more modern facilities. Most teams represented businesses or organizations, working by day as department store clerks, phone operators, engineers, real estate agents, meatpackers, firefighters, dentists, and airline employees or sharing membership in fraternities, women’s clubs and churches. If there were enough teams from a particular company or group, they could form their own league. Modern alleys wanted to ensure they had enough lanes to accommodate league play and tournaments as well as casual bowlers walking in with friends or family to roll a few games. 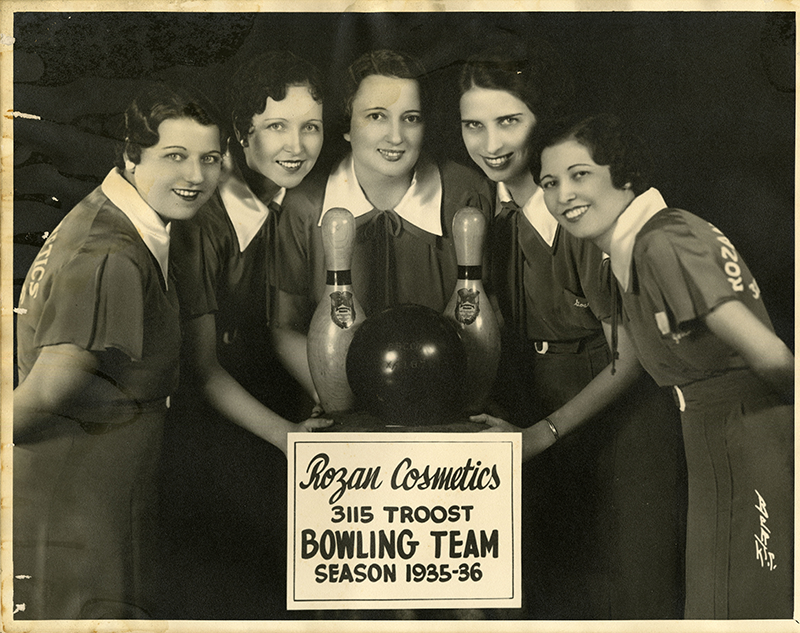 It should be noted that bowling establishments at this time, like many places in Kansas City, were probably segregated. Help-wanted ads for bowling alley jobs often specified race. Advertisements for waiters and other front-line positions usually solicited white applicants while ads for pinsetters and back-of-the-house cooks sought African Americans. It's uncertain if any of these businesses allowed African Americans to enter as paying customers. 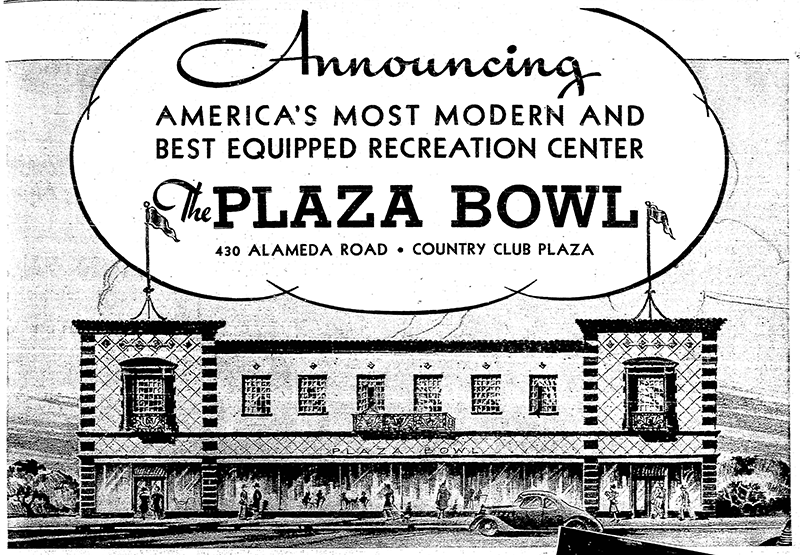 Advertisement for the Plaza Bowl, The Kansas City Star, September 8, 1940. 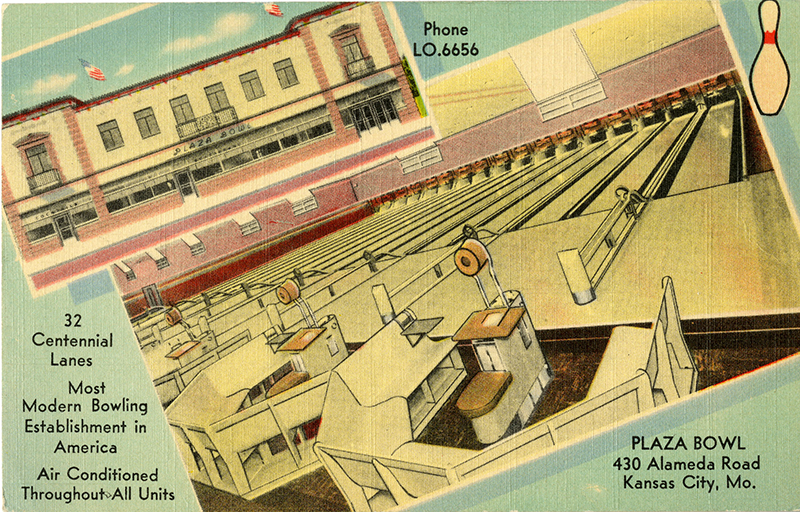 With 32 lanes and a slew of amenities, the Plaza Bowl quickly became a popular attraction. In 1954, it installed the city’s first automated bowling pinsetters, making the human equivalent obsolete and speeding up the game. Also that year, the Plaza Bowl introduced televised bowling. Hosted by KMBC sports announcer Sam Molen, the program “Bowlin’ with Molen” aired for 15 years. Individual bowlers contended for a spot on the show, with the best advancing to compete on television for cash prizes. 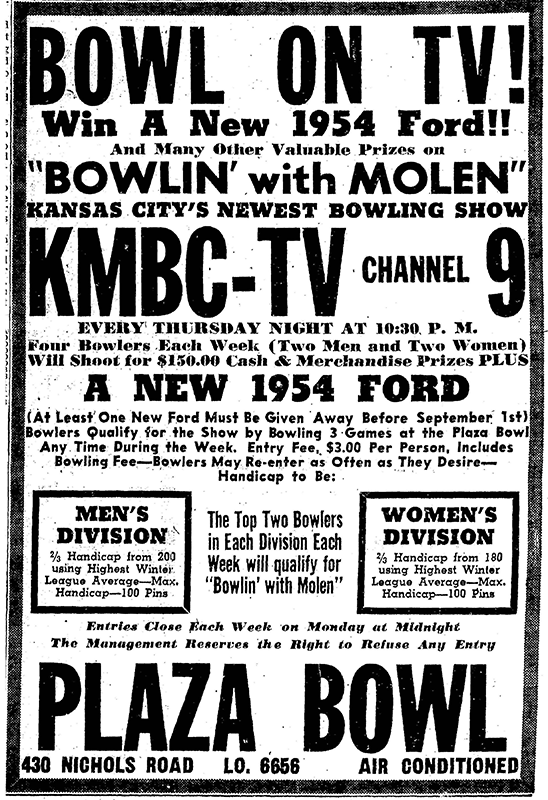 In 1961, the Plaza Bowl was bought by the King Louie Corporation. Originally a bowling shirt manufacturing company, King Louie expanded into building and managing alleys in the 1950s. Its first Kansas City location opened at 7910 Troost in 1955. The brand continued to grow and by the mid-1970s, King Louie owned and operated seven bowling alleys on both sides of the state line. 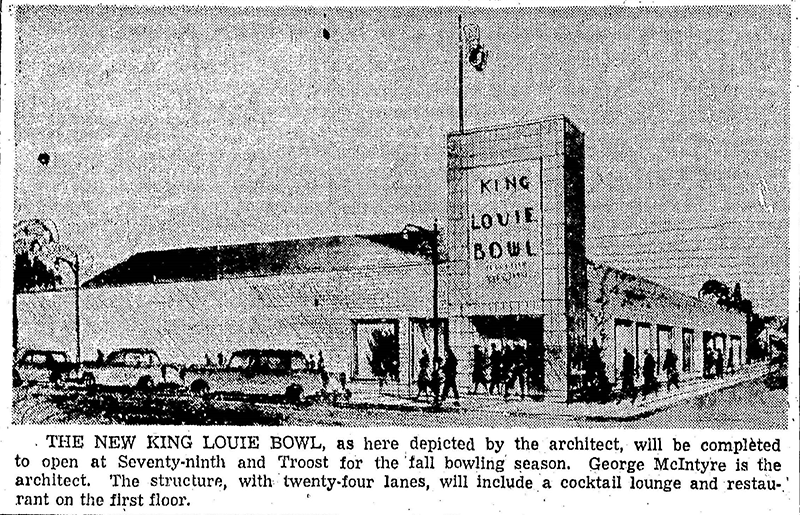 Changing times and attitudes of the late 20th century coincided with changes in bowling. In the late 1970s, bowling teams, leagues, and tournaments suffered declines in participation, interest, and profits. Large bowling alleys began to rely more on walk-ins and casual bowlers to keep the lights on.

In 1978, after suffering damage from the Brush Creek Flood the year before, the Plaza Bowl officially closed and was soon torn down. King Louie continued to operate its other alleys, but all eventually closed or were bought out by other companies. The last location to shut down was the King Louie West at 8788 Metcalf in 2009. It’s now home to the Johnson County Arts & Heritage Center.

Information and images were drawn from searches of The Kansas City Star database and Missouri Valley Special Collections materials. The Gary Katz Kansas City Bowling History Collection was recently donated to the department, and will be available for public research soon.