Elmwood Cemetery: A Window to Kansas City's Past

The 36,000 plots in Elmwood Cemetery at Truman Road and Van Brunt Boulevard compose a sweeping patchwork of history, telling the story of Kansas City from its frontier beginnings, to its role in the border conflicts of the Civil War and rise in the railroad era, to the sprawling city we know today.

Buried at Elmwood are some of the people whose names Kansas Citians see on a daily basis: August R. Meyer (1851-1905), mining magnate and father of the parks and boulevards system, who hired landscape architect George Kessler to design Elmwood Cemetery and other sites around town; Simeon Brooks Armour (1828-99), a meat packing patriarch whose family estate stretched from Warwick to Main along the boulevard that bears his name; and Jacob L. Loose (1850-1923), who made his fortune with the Sunshine Biscuit company, selling comestibles such as the Hydrox cookie, and whose name is associated with one of Kansas City’s most famous parks.

Those are just a few of the prominent citizens remembered in the lavishly illustrated Elmwood Cemetery: Stories from Kansas City’s Past by Bruce Mathews, published by the Kansas City Star Press. To assemble this book, Mathews (a photographer by trade and trustee of Elmwood Cemetery) organized a group of local contributors – historians, members of the business community, journalists, and so forth – who introduce each chapter of the book and provide biographical sketches of several hundred of the people interred at Elmwood. 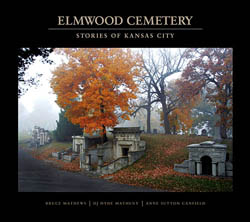 This panel will discuss important aspects of Elmwood’s past, such as, for example, its tradition of diversity. As Joanne Collins notes in her chapter on the cemetery’s African-American contingent, “Kansas City, Mo., is a traditionally segregated town, so it is interesting to observe that Elmwood Cemetery allowed burial of African-Americans in any available plot of any section.”

The first African-American to wear a policeman’s badge in Kansas City is buried at Elmwood. William F. “Bill” Davis (1843-91) joined the police force the same year it was established and served for 15 years.  He’s in good company – prominent educator and newspaper man James Dallas Bowser (1846-1923), whose Gate City Press was one of the most influential weeklies in the region, is also buried at Elmwood. Just before the turn of the century, Bowser wrote the poem “Take Up the Black Man’s Burden” in response to Rudyard Kipling’s ode to imperialism, “The White Man’s Burden.”

Members of Kansas City’s Jewish community, too, have been laid to rest at Elmwood.  In 1872, the first year it was established, the Cemetery sold two acres to the Reform Jewish Congregation B’nai Jehudah, which thrives to this day. Morris Helzberg (1867-1922), founder of the successful Helzberg Diamonds company, is buried here, along with Adolph Bloch (1847-1917), whose grandsons founded H&R Block. 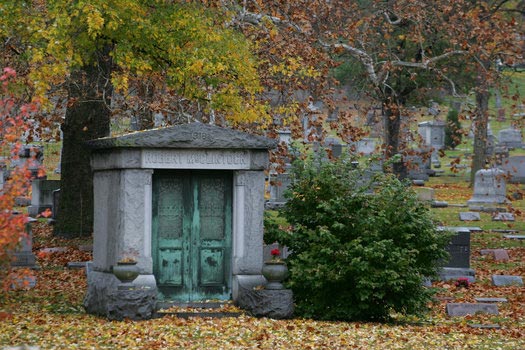 Not everyone buried at Elmwood Cemetery is so favorably remembered, however. A native Tennessean and the first mayor of Denver, Colorado, John Courtney Moore (1831-1915) founded the Kansas City Times after moving to KC in the late 1860s. In his chapter on journalists laid to rest at Elmwood, former Star editor Monroe Dodd writes, “Moore proved to be an unrepentant and unreconstructed Confederate. Easy to anger, he engaged in several duels in Missouri. A confirmed racist, he strongly believed African-Americans would ruin the United States and advocated deporting them.”

But perhaps the most moving chapter in Elmwood Cemetery is Mathews’ poignant tribute to some of the cemetery’s least-famous souls, such as Jesse Clutter (1880-1897), a jockey whose time was cut short when he was thrown from his horse at Exposition Driving Park. There’s also a headstone for “Baby Hyde” (1910), who died within hours of his birth while his father, Dr. Bennett Clark Hyde, was on trial for the murder of Col. Thomas H. Swope. And let’s not forget Elmwood Cemetery’s first burial, that of Sallie Ayers, who died of a “summer complaint” in 1872.

Indeed, Elmwood Cemetery is a broad and engaging window into Kansas City’s past. Learn more when Mathews and company visit the Kansas City Public Library on October 6.