The Gospel of Mark Twain

If you had to pick one writer alive today whose autobiography could become a bestseller 100 years after his or her death, who would you choose? Rowling? Roth? Franzen, perhaps? It’s hard to fathom which of today’s literary celebrities might still be relevant in 2110.

When it comes to native Missourian Samuel Langhorne Clemens, better known as Mark Twain, his power to get people talking is as potent as it was during his lifetime. This year, on the centenary of his death in 1910, a complete and unexpurgated version of Twain’s autobiography has the literary world abuzz.

Resting comfortably in the Amazon top 10 as it awaits its November 15 release, volume one of the University of California Press’ three-volume, 500,000-word Autobiography of Mark Twain begins the fulfillment of Twain’s own decree that his memoirs not be published until 100 years after his death. The book is the work of a team of editors at UC-Berkeley, where the Mark Twain Papers are held at the Bancroft Library.

Twain felt that a century-delayed posthumous publication would grant him the license to speak freely without offending anyone whom his recollections might touch. “In these conditions,” he said in 1899, “you can draw a man without prejudice exactly as you knew him and yet have no fear of hurting his feelings or those of his sons or grandsons.” (He had even expressed the desire not to have certain parts published until 500 years after his death.)

Another reason was business strategy: If Twain’s literary executors could publish new editions of his works – such as The Adventures of Tom Sawyer or Adventures of Huckleberry Finn – with previously unreleased autobiographical material in their appendices, the books’ copyrights would be extended, yielding royalties to Twain’s surviving children. Congress changed the copyright laws, however, and when his youngest daughter, Jean Clemens, died unexpectedly in 1909, leaving only Clara (his eldest, Susie, had died in 1896, aged 24), Twain abandoned his plans to repurpose his autobiography.

Those who have followed Twainiana in the 20th century will know that Twain’s wishes for an autobiographical embargo were rejected. Edited versions of Twain’s autobiography have appeared over the years, first by his official biographer and literary executor, Albert Bigelow Paine, in 1924; again in 1940 by Bernard DeVoto; and most recently in 1959 by Charles Neider. In all cases, various passages deemed offensive were censored, either by the editor himself or at the behest of Clara, who died in 1962.

In that sense, the UC Press’ Autobiography finally does Twain justice. Though most of the material in the first volume has been published before, by the time the three-volume series is complete, half of it will have never before been in print. It’s straight from the horse’s mouth – and what a mouth it is.

It must have been tempting for the editors of the new Autobiography to slap tags like Uncensored! Unrestrained! or Uncut! on the cover. To their credit, they kept the packaging tasteful. The content – as one might expect from America’s most devastating wit – is a different matter. 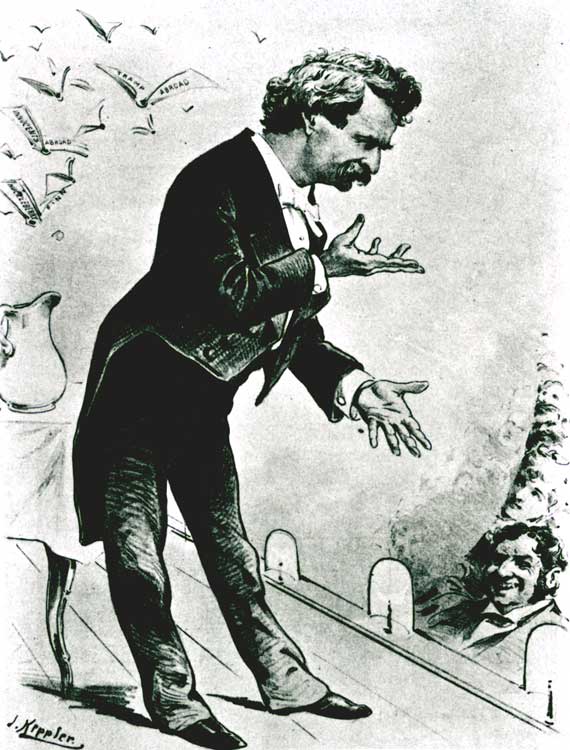 For example, he showed no mercy to ex-business associate James W. Paige, whose development of an automatic typesetting machine Twain had helped finance to the tune of $170,000. In the end, Paige failed to produce a successful prototype and tried to cheat all of his partners out of their investments. Twain was forced to return to the lecture circuit to avoid going broke. “Paige and I always meet on effusively affectionate terms,” wrote Twain, “and yet he knows perfectly well that if I had his nuts in a steel-trap, I would shut out all human succor and watch that trap till he died.”

To ensure that his memoirs would be off the cuff and not “too literary,” Twain adopted the method of dictating to a stenographer – a notion that was inspired by his daughter Susie in the 1880s. He remained enthusiastic about the method for years. In 1904, he wrote to his friend William Dean Howells:

You will never know how much enjoyment you have lost until you get to dictating your autobiography; then you will realize, with a pang, that you might have been doing it all your life if you had only had the luck to think of it. And you will be astonished (& charmed) to see how like talk it is, & how real it sounds, & how well & compactly & sequentially it constructs itself, & what a dewy & breezy & woodsy freshness it has…

Even in his fictional work, Twain refused to adhere to conventions. Readers of Huck Finn will remember the warning shots at the beginning against those seeking a “motive,” “moral,” or “plot” in the story. In talking out his autobiography, Twain also abandoned chronology. He preferred – relished, even – the way in which dictation facilitated meandering from remembrances of the past to topics of interest in the present and back again.

“With a pen in the hand the narrative stream is a canal; it moves slowly, smoothly, decorously, sleepily, it has no blemish except that it is all blemish,” he wrote. After beginning his autobiography as a written work in 1870, by 1904, Twain concluded that loose, spoken narration was “the right way to do an Autobiography.”

Preview Twain’s definitive, authoritative, uncensored, unrestrained, and uncut new Autobiography in the video below, made by UC Press, and join us for a discussion with Robert Hirst this Wednesday at the Central Library.