John Adams: On the Best-Read Founding Father and the Woman Behind Him

What would you do if you had to build a nation? Start Googling? Download an app? When John Adams strode onto the world stage by joining the Continental Congress as a representative from Massachusetts, he had no iPhone or MacBook Air. Contemporary European books (often in their original languages) and Greek and Latin classics were his RSS and HTML.

Unlike his more privileged colleague Thomas Jefferson, Adams was the son of an uneducated farmer. His father had to sell ten acres of land to pay his son’s tuition at Harvard. Mindpower, not money, was Adams’ currency in the social climate of colonial America, and devouring the knowledge contained in books was Adam’s ticket to self-betterment.

A more-than-avid reader, Adams built a library of thousands of volumes – a search engine in paper, ink, and binding. The knowledge contained in Adams' vast library not only fueled his passionately principled mind but shaped the creation of our country -- and set the course of a family.

A brand-new exhibit and a special event happening this week at the Kansas City Public Library celebrate Adams’ bibliophilic legacy.

On Saturday, October 23, the Boston Public Library’s traveling exhibit John Adams Unbound arrived at the Central Library, where it will remain through December 19. A study of Adams’ life through his library, the exhibit traces the growth of Adams’ reading life, from his youthful days carrying Cicero’s Orations in his pocket, to his adult years of amassing a collection that reflected the parts he played in American history: accomplished attorney, revolutionary, statesman, thinker, chief mover of the Declaration of Independence, and America’s first foreign ambassador (to name a few of his credits).

This exhibit showcases the 3,500 books that Adams willed to the people of Massachusetts and that were deposited in the Boston Public Library in 1894. Far from a portrait of a person quietly reading, Unbound tells the story of a great mind interacting with the thoughts and discourse that permeated a crucial period in world history.

He left evidence of this dialog, too – Adams scribbled in his prized possessions with gusto.

His most heavily annotated book was a copy of Mary Wollstonecraft’s An historical and moral view of the origin and progress of the French Revolution. Adams so opposed Wollstonecraft’s sympathy for the violent, unchecked actions of the French revolutionaries that he filled the book’s margins with 10,000 words of his own commentary, including such reactions as, “This nasty rhetoric could be learned only in France.” 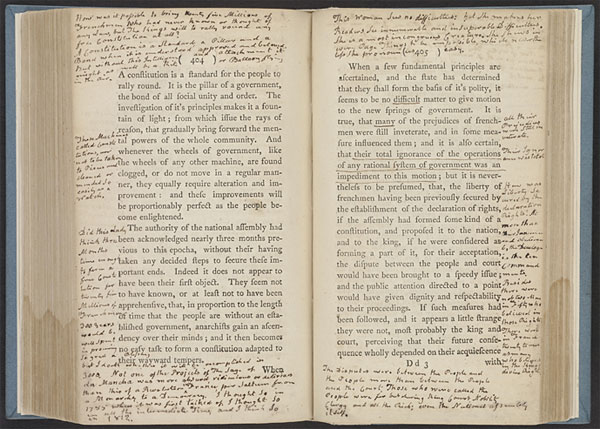 For its marginalia alone, Adams’ library is of immense value. He never hesitated to jot down his immediate reactions, providing later generations glimpses into his innerworkings as he digested the wisdom of the day. Given that he seemed to have always intended to pass on his books to others, his marginalia is not so different from the writing common among 21st-century bloggers. Like an archived 18th-century blog, Adam’s library is filled with his unadulterated responses to his reading, forming a permanent conversation between Adams and the thinkers whose works influenced him. 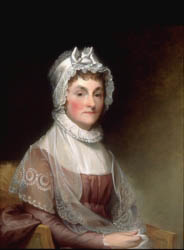 This Thursday, October 28, a scholar with one-of-a-kind insight into the lives and legacies of the entire Adams clan visits the Central Library. At 6:30 p.m. this Thursday, Henry Adams, great-great-great-great grandson of John and Abigail Adams delivers a lecture on “The Real Adams Family,” with special emphasis on John Adams greatest influence: his wife, Abigail Smith Adams.

(Side note: Henry Adams is a noted art historian who spoke earlier this year at the Kansas City Public Library about his book Tom and Jack: The Intertwined Lives of Thomas Hart Benton and Jackson Pollock. He teaches art history at Case Western Reserve University and is a former curator of the Nelson-Atkins Museum of Art.)

Despite having no formal education, Abigail blossomed into a confidant, advisor, and editor to her husband. With views nothing short of radical by 18th-century standards, she was a vocal proponent of equal rights for women and African-Americans.

In this scene from the Emmy-winning HBO miniseries John Adams, which is based on David McCullough's excellent biography, Abigail (played by Laura Linney) urges her husband (Paul Giamatti) to include women in American politics.

Probably the best record of Abigail’s political views is found in her letters to her husband – after Adams’ first journey to the Continental Congress in Philadelphia in 1774, the two formed a lively, lifelong correspondence. In a 1776 letter, Abigail wrote, “Remember, all men would be tyrants if they could. If particular care and attention is not paid to the ladies, we are determined to foment a rebellion, and will not hold ourselves bound by any laws in which we have no voice or representation.”

Indeed, it’s difficult to envision Adams’ impact on American history without the help of his beloved, brilliant Abigail.

John and Abigail are the heads of America’s first real dynasty. This Thursday, Henry Adams will trace the roots and branches of this remarkable family, including sixth U.S. president and anti-slavery exponent John Quincy Adams, his accomplished son, Charles Francis Adams (whose diplomatic efforts in Great Britain aided the Union during the Civil War), and railroad reformer Charles Francis Adams Jr., who became director of the Kansas City stockyards.

For those interested in learning more about the most well-read Founding Father and his entire family, Henry Adams’ lecture on Thursday is a can’t miss. And for even more great information, arrive early and stop by the exhibit John Adams Unbound. (You can also peruse the Boston Public Library’s digital exhibit on John Adams at johnadamslibrary.org.)

Afterwards, you may not be ready to found a nation quite yet, but you’ll never need to Google John Adams again.

John Adams Unbound has been organized by the Boston Public Library and the American Library Association Public Programs Office. The traveling exhibition has been made possible by a major grant from the National Endowment for the Humanities: great ideas brought to life.