This Land Is Nixonland

In a July 6, 1971, speech before media executives at a Holiday Inn in Kansas City, Missouri, President Richard M. Nixon hinted at a future shift in foreign policy that would climax in his unprecedented visit to China. Trouble was, no one at the Holiday Inn fully fathomed what “Tricky Dick” was up to.

Though he warned that America’s economic power was waning and forecasted the need to “take the first steps toward ending the isolation of Mainland China from the world community,” Nixon – who had been a crafty poker player while serving in the Navy --  wasn’t showing many cards. (The full text of his address is available here.)

In Nixonland: The Rise of a President and the Fracturing of America, his compelling, rowdy and incisive analysis of Nixon’s rise and fall in the turbulent ‘60s and early ‘70s, Rick Perlstein conjectures that the significance of Nixon’s Holiday Inn speech wasn’t recognized until years later. Perlstein writes:

For all his listeners knew, when [National Security Advisor] Henry Kissinger disappeared from the diplomatic press corps’ radar the next day on an official visit to Pakistan, it was just as his handlers claimed: that he was indisposed with a stomachache. He had actually ducked inside the People’s Republic of China to close the deal for a presidential visit.

The summer of 1971 was a time for guarding secrets. In June, The New York Times began publishing the leaked Pentagon Papers – the Department of Defense’s secret history of the Vietnam War. That, Perlstein writes, marked the moment “beyond which any morally aware American could believe anything the government told them about Vietnam.”

A few months later, Nixon’s “plumbers” would burglarize the office of a psychiatrist who had been treating Daniel Ellsberg, leaker of the papers. Soon after, the plumbers would be involved in the infamous break-in at the Democratic National Committee’s headquarters in the Watergate Hotel. 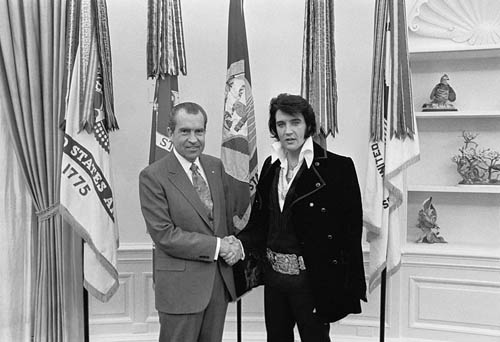 Nixon’s late-career catastrophes are de rigueur in any comprehensive study of the only U.S. president to resign. Where Nixonland stands apart from mere biography is in Perlstein’s rollicking portrayal of the time surrounding Nixon – a moment of fiery unrest on the streets and nefarious dealings in the backrooms.

Weathermen, Black Panthers, hippies and yippies, race riots in major cities (including Kansas City), Abbie Hoffman, Hanoi Jane, Kent State and Woodstock are some of the signposts. Meanwhile, on the right, Perlstein eyes a falling Barry Goldwater and a rising Ronald Reagan against the backdrop of the fight for decency and crusades against drugs and pornography. It was an era that makes the Tea Party rallies of today look utterly toothless.

At the center of it all, though, remains Nixon, leader of the “silent majority” and pioneer of the politics of polarization. Long before he was elected president in 1968, Nixon built a reputation as a man who wouldn’t settle for simply defeating his opponents – he wanted to crush their careers. The term “Nixonland” was coined by 1956 presidential candidate Adlai Stevenson and his speechwriter John Kenneth Galbraith in the former’s unsuccessful race against two-termer Dwight Eisenhower, under whom Nixon served as vice president. Wrote Stevenson and Galbraith:

Our nation stands at a fork in the political road. In one direction lies a land of slander and scare; the land of sly innuendo, the poison pen, the anonymous phone call and hustling, pushing, shoving; the land of smash and grab and anything to win. This is Nixonland. America is something different.

America was not different then and is no different now, Perlstein implies, and we are in many ways still living in Nixonland. (Anyone in Kansas City with a TV has surely felt this in the contentious campaign commercials generated by both camps in the ongoing congressional race.) 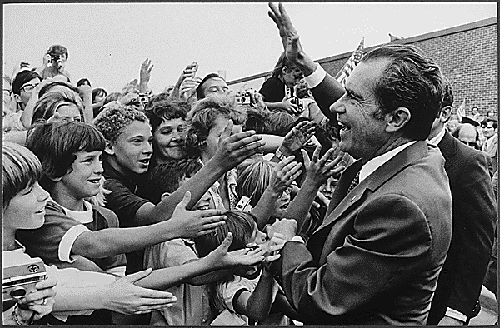 On the campaign trail, 1972. The National Archives.

Humiliation permeated Nixon’s life and drove his career. Even on the night of his narrow victory over Hubert Humphrey in ‘68, Nixon was still “the boy who’d spent his childhood cloistered in a tower reading, who hated to ride the school bus because he thought the other children smelled bad,” Perlstein writes.

The roots of Nixon’s underdog persona began in his working-class Yorba Linda childhood, under a tyrannical, emotionally distant father and a doting mother. But, Perlstein argues, his political career first took shape in college at Whittier, where Nixon and many of his classmates suffered exclusion from the elite “circle of swells” known as the Franklins, who were “well-rounded, graceful, moved smoothly, talked slickly.” Nixon founded a new club, the Orthogonian Society, for the unrefined, self-made strivers who were not to the manor born.

As leader of the Orthogonians, whose motto was “Beans, brains and brawn,” Nixon convinced his constituency that it was noble to be upright, square and hardworking. Perlstein argues that Nixon’s entire life was shaped by his determination to bring down America’s Franklins -- Stevenson, Alger Hiss, JFK, LBJ, et. al. – and establish Orthogonian rule. And though his quest ended in failure and shame, Nixon’s legacy lives on in America’s perpetually divisive political climate.

Perlstein visits the Kansas City Public Library on Monday, October 18, to introduce a screening of the fourth 1960 presidential debate between Nixon and John F. Kennedy, the final installment of our series “The Great Debates Revisited.” It will be interesting to see how Perlstein – an acclaimed liberal thinker who has made a career out of studying American conservatism (his first book was on Goldwater), – relates Nixon’s performance in the debates to his career overall and his lasting influence on American politics.

To attend this free screening and find out what Perlstein has up his own sleeve, RSVP here and arrive early to the 6:30 p.m. event (a reception begins at 6) to get a good seat in Plaza Branch’s Truman Forum.

We can’t guarantee results, but perhaps when it’s over, you’ll be closer to answering the question: Are we still living in Nixonland?