Library Interview: Brandon Kinney on the Mormon War of 1838

But in a sense it’s still being fought today.

His experiences in the wake of the book’s publication have been “mind boggling,” Kinney, 32, says.

“I’ve gotten more hate mail for this book than I could have ever imagined. I’ve been called anti-Mormon. But then I’ve also had some guy send the book back to me, saying I was a Mormon sympathizer who was writing on behalf of the Mormon church.

“You have to be careful even with the words you use to talk about this period of history,” the Butler, Missouri, lawyer says, “because everything about it is still so charged.”

Drawing on official church histories and the recently digitized correspondence of Missouri leaders from the 1830s, Kinney pieced together a hair-raising story of prejudice, misunderstanding and outright murder.

The Mormons who came to Missouri early in the 19th century didn’t get along with those already settled there, Kinney notes. For one thing, the Mormons were abolitionists whose newspapers railed against slavery, an institution popular in the state.

Then, too, there was the belief of the Saints that God meant for them to inherit the land. This doctrine didn’t go down well with the non-Mormons who already held property. They launched anti-Mormon purges.

“The degradations the Mormon settlers underwent were horrible,” Kinney says. “Their businesses and homes were burned. Mobs tarred and feathered Mormon leaders. One winter Mormons were thrown out of their homes and spent a frigid night huddled in a grove of trees praying for deliverance.”

In 1836 the authorities basically gave the Mormons Caldwell County as a place where persecuted and displaced members of the faith could take refuge. 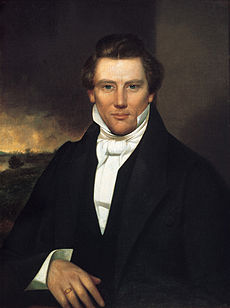 That year Joseph Smith, the prophet who founded the church, visited Missouri with several leaders of the religion. One of them gave a fiery Fourth of July speech in which he declared that Missourians who failed to join the Mormon faith would be “exterminated.” Smith so liked the speech that he had it printed and distributed.

Things came to a head when a group of Mormon men left Caldwell County and attempted to vote in an election in August 1838 in Daviess County. A brawl ensued.

The authorities issued warrants for the arrest of Smith and his lieutenants, but the lawmen in Caldwell County – all Mormons – refused to arrest them. In fact, Mormons then descended on Daviess County, looting and ransacking towns.

Missouri’s governor called up the militia to keep the peace, but skirmishes between Mormons and non-Mormons were frequent and occasionally fatal. The Mormon War had one genuine battle – at Crooked River in Ray County – and one large-scale atrocity.

The latter occurred when a group of militia and non-Mormon settlers invaded the town of Haun’s Mill in Caldwell County. The men of the town gathered in a blacksmith shop to oppose the militia, but the building became a deathtrap when the invaders fired at least 100 rounds into the structure, killing 17 Mormons.

In October Gov. Lilburn Boggs issued the so-called “Mormon Extermination Order,” which forced Smith and his followers to leave Missouri. The war was over.

Kinney, a first-time author, said researching his book was much easier than he had supposed.

“I found lots of resources on both sides. In 2009 the Missouri Secretary of State released all the handwritten notes and dispatches between the governor, the generals, and the courts. I started reading through them and became fascinated. I mean, these are first-hand original source documents.

“Then I went through all the Mormon histories.

“So I got Mormon stories from Mormon sources, and militia stories from militia sources. I tried to respect both sides, to let the facts speak for themselves.”

For the record, Kinney said that he dropped out of the RLDS while a teen and didn’t attend any church for several years. He now attends a non-denominational Christian church.