In 1936, Mao Tse-tung was not dead, as his enemies would have China believe. Indeed, despite frequent reports of his demise, the 43-year-old communist leader was alive and well and giving his first-ever interviews to a foreign correspondent: Kansas City-born journalist Edgar Snow.

Snow had been living in China since 1928. Before leaving for his 13-year stay in China, Snow studied at the University of Missouri School of Journalism and briefly pursued advertising in New York. By 1936, he had written two books on China, the non-fiction travelogue Far Eastern Front and the short story collection Living China.

When Snow met with Chairman Mao at the communist capital of Pao An in far northwest China, the West knew very little about this son of a peasant who would fight a war with Japan, defeat Nationalist leader Chiang Kai-shek, and later be responsible for social and economic upheavals such as the Great Leap Forward and the Great Proletarian Cultural Revolution.

American apprehension of the once and future Chairman would change in 1937 with the publication of Red Star Over China, Snow’s detailed and sympathetic history of the life of Mao and the rise of his Red Army. In addition to making Snow famous, the book introduced the world to Mao and his fellow “agrarian reformers” (such as future Chinese Premier Chou En-lai,) showing them at a time when they were relatively young and idealistic warriors, fighting for a cause they believed would save their country.

This Wednesday, October 20, Edgar Snow, as portrayed by local actor Bob Brand, returns to his hometown for an installment of the live interview series Meet the Past with Crosby Kemper III. The free event begins at 6:30 at the Central Library following a 6 p.m. reception and is co-sponsored by the Edgar Snow Memorial Fund. 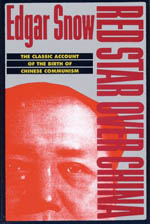 Part painstakingly researched history, part human drama, Red Star Over China traces the growth of the communist party in China from its inception in 1921 to its war with the Kuomintang (Chiang’s forces), ending with the December 1936 arrest and brief incarceration of Chiang Kai-shek at the hands of his deputy commander-in-chief, Chang Hsueh-liang – an episode known as the Sian Incident.

Snow’s portrait of the Red Army is of hearty, exuberant freedom fighters. They had carried out and survived the 368-day, 6,000-mile Long March out of southwest China, fighting battles and recruiting peasants along the way. Snow’s sympathy for Mao’s troops grew in the four months he spent embedded with them behind the blockaded Red area of northwest China.

Early in the book, on the way to rendezvous with Mao, Snow marvels at the Red soldiers’ almost constant singing on the road and praises their self-imposed discipline:

When we passed wild apricot trees on the hills there was an abrupt dispersal until everyone had filled his pockets, and somebody always brought me back a handful. Then, leaving the trees looking as if a great wind had struck through them, they moved back into order and quick-timed to make up for the loss. But when we passed private orchards, nobody touched the fruit in them, and the grain and vegetables we ate in the villages were paid for in full.

As for Mao himself, Snow developed a deep acquaintance and clear admiration. Looking back through the chaos and terror of the Cultural Revolution, it’s hard for today’s readers to imagine a charitable Mao. But as a 43-year-old rebel leader whose platform consisted of improving peasant welfare and protecting China against Japan, Mao exhibited many good qualities in the months Snow was with him. Snow described the then-Chairman of the Chinese People’s Soviet Republic as

an omnivorous reader, a deep student of philosophy and history, a good speaker, a man with an unusual memory and extraordinary powers of concentration, an able writer, careless in his personal habits and appearance but astonishingly meticulous about details of duty, a man of tireless energy, and a military and political strategist of considerable genius.

Given Red Star Over China’s overall favorable portrayal of the Chinese Communists, it’s not surprising that Snow fell under negative scrutiny during the “Red Scare” that gripped American immediately after World War II. He was questioned by the FBI, and his second wife, Lois Snow, an actress, was banned from Broadway. (In her later years, Lois Snow has become an outspoken critic of the Chinese government, as evidenced in her October 10, 2010, letter to the New York Times praising imprisoned Nobel Prize winner Liu Xiaobo.)

Edgar Snow is well remembered in China. During the Republic’s 60th anniversary celebrations in 2009, a poll organized by Radio China International named him one of 10 “top international friends.” His ashes were divided between Sneden’s Landing, New York, and a special monument at Beijing University.

Though he wrote seven more books about Asian politics, Snow did not live to see China’s relationship with America take shape. He died in 1972, just before Richard Nixon’s historic meeting with Chairman Mao.

Learn more about the legacy of Edgar Snow’s classic work this Wednesday, and fire off questions of your own during the Library’s Meet the Past: Edgar Snow.