In 1908, American journalist John Kenneth Turner, posing as a wealthy investor, infiltrated hemp plantations in the Yucatán peninsula. His goal: to expose the “chattel slavery” abundant Mexico under the oppressive regime of Porfirio Díaz.

“Slavery in Mexico! Yes, I found it,” he wrote in his 1910 book Barbarous Mexico. A bestseller at the time, Turner’s exposé of the so-called “Porfirian Peace” provided context for understanding the revolution that eventually drove Díaz out of the country and ushered in years of upheaval and reform.

With Barbarous Mexico, he addressed an American audience that viewed its “Sister Republic” as perhaps a bit poorer and less technologically advanced than the U.S. but not much different in terms of liberty and justice. And while Mexico did have democratic written laws, Turner found the government to be hopelessly corrupt:

According to Turner, plantation owners kept their laborers in debts so deep and endless that they effectively owned them as property. In light of this fact and other human-rights violations under Díaz, Turner agreed with the rebels: armed revolution was justified.

And that’s exactly what happened. After Franscisco I. Madero deposed Díaz and took steps to become president – a career that ended in betrayal and murder at the hands of his own military commander, Victoriano Huerta – chaos overtook Mexico. 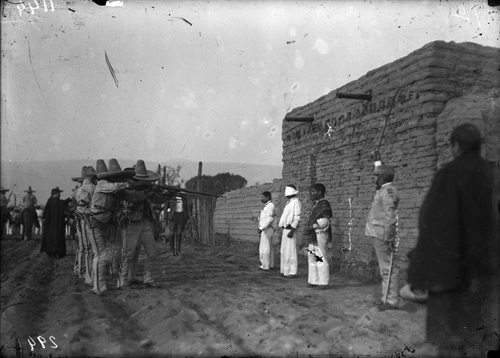 Guerrillas such as Emiliano Zapata and Francisco “Pancho” Villa rose in the countryside and fought against would be leaders like Huerta, against whose forces Villa struck a mortal blow in the 1914 Battle of Zacatecas. Power struggles between various government and insurrectionist factions would plague the next decade, and more than a million people would die.

On the other hand, the monolithic, oppressive Díaz regime was toppled, social reform was set into motion, and, in 1917, a new constitution was established.

Ripples of the Revolution surged across Mexico’s northern border, and though the U.S. government under Taft initially supported Díaz, many Americans shared Turner’s sympathies for the rebels. 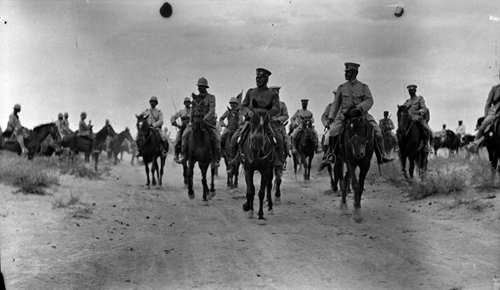 Generals Huerta and Tellez reviewing their troops before the Battle of Bachimba (1907-1912). Agustín Víctor Casasola

In fact, we need take but a two-hour drive south of Kansas City to find historic evidence of American support for the Revolution. There, in the southeast Kansas town of Girard, Julius Augustus Wayland’s socialist newspaper, Appeal to Reason, introduced the public to Barbarous Mexico, printing it in serial installments.

Wayland founded Appeal to Reason in Kansas City in 1895 and moved it to Girard two years later. In 1919, the paper and its press were purchased by Appeal to Reason writer Emanuel Haldeman-Julius and his wife, Marcet, who would go on to make their name printing Little Blue Books, pocket-sized reprints of classics that became a global phenomenon, selling hundreds of millions of copies.

At its peak, Appeal to Reason had half a million subscribers and featured writing by activists such as Eugene Debs, Helen Keller, and Mary “Mother” Jones. Prior to printing Barbarous Mexico, Wayland’s paper had introduced the public to Upton Sinclair’s masterwork, The Jungle, also published serially.

To commemorate the 100th anniversary of the 1910 Mexican Revolution, the Kansas City Public Library is hosting a series of programs that examine not just the local connections but all facets of the Revolution. 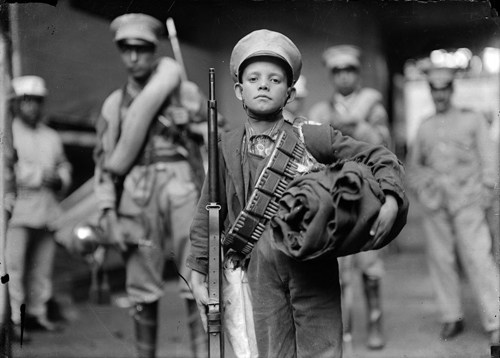 Portrait of boy with a federal soldier’s ammunition and equipment (1904-1913). Agustín Víctor Casasola

First, on display in the Central Library from November 6, 2010, through January 2, 2011, a photography exhibit showcases the career of the photojournalist Agustín Víctor Casasola. Presented by the Mexican Consulate, Viva La Revolución: Mexico 1910 in Retrospect, will feature 50 rarely seen photographs by one of the 20th century’s greatest photographers, providing a comprehensive portrait of the 1910 Revolution and the social transformation it brought to the Mexican people.

Next, playing Mondays in October in the Stanley Durwood Film Vault, Viva La Revolución: The Motion Pictures Series features five classic Mexican films on loan from the Mexican Ministry of Foreign Affairs. Below is an excerpt from the 1935-6 film Vámonos con Pancho Villa, showing this Monday, November 8, at 6:30 p.m.

Beginning with the 1910 Revolution, Mexico’s history over the past century has been complex, tumultuous and compelling. Don’t miss this chance to experience, completely free of charge, an in-depth look at a country with a rich and exciting story.

Photos provided by the Casasola Archives of the National Institute of Anthropology and History of Mexico. See more on display at the Library’s Viva La Revolucíon exhibit through January 2.