The Mysterious Mind behind Lemony Snicket

What secrets are lurking in the mind of Daniel Handler? I recently had the opportunity to speak with the author, better known as his character/alter-ego Lemony Snicket, the narrator of the 13-book saga A Series of Unfortunate Events. The series has been published in at least 41 languages and has won numerous literary awards, even spawning a 2004 film adaptation with Jim Carrey.

However, A Series of Unfortunate Events is not the entirety of Handler’s work. He is the author of several novels including The Basic Eight, Why We Broke Up, and most recently The Dark, a picture book collaboration with Caldecott-winning illustrator Jon Klassen.

What books had the greatest impact on you as a child?

Probably The Hapless Child by Edward Gorey; Danny, the Champion of the World by Roald Dahl; The Headless Cupid by Zilpha Keatley Snyder – Those are probably the really big ones.

In all those books, kind of terrible things happen. And all of them are atmospheric. And they involve unsupervised young people in creepy surroundings, and I really like that. That was my idea of a good time. 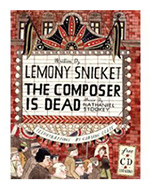 What role have libraries played in your life?

It’s hard to imagine what role they haven’t played. When I was a child the library was the place where I could go unsupervised. My dad would take me usually, and he would be in the adult section and I would be in the children’s section. I had some librarians who would help me, but one of the ways that they would help me when I was a child was by making me feel unguided. I felt totally alone when I was exploring. I’m sure they helped curate what I was reading when I was checking out, but they kept me thinking that I could take anything. And that was very liberating experience.

Then in college there were two really wonderful libraries on campus where I was at, which was Wesleyan University. I spent all my time there, working. When I was a young adult in particular, I didn’t have any money, so then libraries were my education as I was trying to be a writer. I didn’t buy any books at all; I was only checking books out of the library and that was a glorious feeling.

And then now, I’m not broke, but the library is more of a place I can work. It’s a great place to work if you’re thinking about the diversity and injustices of the world because you will see that in a public library in a big city, unlike many other places where a successful writer may be alone to write, in his own studio or something like that. It’s good because you see all kinds of people there doing all kinds of things.

What do you love about writing?

What advice do you have for young people who want to become authors?

Do something else. [laughs] I mean, I guess read a lot and write a lot and take a lot of notes. I think writers really have to find their own path. I think one thing about being a writer is that it has a certain kind of allure for a certain kind of person, and you kind of have to get over that mythology. You have to figure out if you really like it or not.

I imagine being a librarian is kind of the same thing. It seems to me that many people who might be drawn to the librarian profession have something of an idea of “Oh, I’ll be alone reading all day in a beautiful space…” Whereas actually being a librarian is not that, so you have to learn that you like the actual thing rather than the idea of it. I think being a writer has some of the same things. There’s a fantasy that doesn’t have anything to do with sitting around and making your book better. You have to figure out if you really like to be alone for six hours a day, working on things on paper.

You use a pseudonym in your writing… Do you enjoy the extra anonymity that comes from that? Does it come with any advantages or disadvantages?

I guess the advantage is that if I’m buying ointment with a credit card, no one recognizes me.

I never talk about Lemony Snicket as a pseudonym, because I think of him as a character. He’s the narrator of the books, and I thought it would be fun to publish the books under the name of the narrator. So it’s kind of splitting hairs, but it wasn’t to keep me away from the teeming people or anything like that. I just thought it would be interesting to have the books be mysterious. And I think that’s one of the things people like about the books. They exist in some mysterious world.

Since early literacy skills are so key to future success, how do you think we can all build a stronger community of readers?

Perhaps I’m wrong about this, but I worry more about communities of adult readers than communities of young readers, because I think for the most part, young people, whether they're strong readers or not, they don’t have to be told that it’s something important to do.

I get more concerned about adults that kind of slack off about reading and often times when I meet parents who are having trouble with their kids reading, I say, “What are you reading right now?” and they’re like “Ugh, I’m so busy… I started this book on vacation six months ago and I haven’t finished it…” And I think, "That’s why."

I like to think about ways for adults to get as geekily involved in literature as children are. But I think writers are always asked that question, and we already love literature. We are kind of the last people to ask. We are already fans of it. Its inexplicable to me that people wouldn’t be interested in reading.

Liesl Christman is the Digital Content Specialist for The Kansas City Public Library, managing content for the Library's blogs and social media accounts. She is an unabashed enthusiast of comic books, roller derby, and all things food.