The Revolution Will Be Photographed

Imagine President Obama jumping into the Potomac for a swim, in the process signaling a violent youth movement that overturned state and local governments. Hard to believe? Something much like that happened in 1966 when Mao Zedong launched China's Cultural Revolution.

Now, we’re not comparing President Obama to Chairman Mao in terms of political agendas. But imagine, for a minute, watching the leader of the world’s most populous country take a dip in a river, don a white bathrobe and wave happily to the press. Meanwhile, he’s spawning a revolution that will shut down schools and slow industry to crawl as his Red Guard ransacks homes, schools and libraries, persecutes capitalists and religious leaders, and generally makes a mess of the whole country. Kind of an odd picture, isn’t it?

In a two-hour display of vigor, on July 16, 1966, the 72-year-old Mao Zedong swam the Yangtze River. He was reprising a swim he had made ten years earlier, which he’d immortalized in a poem. As the clip below shows, the 1966 swim not only set off a national swimming craze, it also heralded the beginning of the Great Proletarian Cultural Revolution. For ten years – until Mao’s death in 1976 – the Cultural Revolution sent China into a tailspin.

Photojournalist Li Zhensheng saw it all firsthand. From 1964 through the early 1980s, Li worked as a photographer for the Heilongjiang Daily in Harbin, a newspaper serving the northernmost province of China. A strong-willed individualist who was never admitted to the communist party, Li hid tens of thousands of photos that would have been censored by the newspaper – and probably could have gotten him killed.

In the late ‘90s, Li began mailing his secret photos to Contact Press Images in New York. The result is Red-Color News Soldier (Phaidon, 2003), a book that depicts the chaos of the Cultural Revolution with unprecedented clarity and honesty.

Red-Color News Soldier gives an intimate look at a time of violence and upheaval for an entire nation.

Early in the book, a series of photos shows two adolescent Red Guards (Mao’s young citizen soldiers) shaving the head of a disgraced provincial governor as a hundred thousand people look on. A sign hangs around the man’s neck, displaying the crimes he’s been accused of: hoarding riches, committing incest and being a “black gang element.” Public humiliation was a popular technique in Mao’s revolution – picture after picture shows people standing on chairs, smeared with ink, wearing signs and dunce caps as crowds jeer. 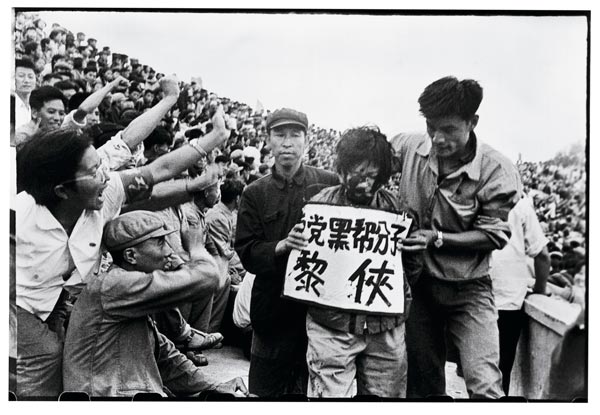 In another photo, a child in uniform performs the “loyalty dance,” an expression of blind devotion to the “Great Helmsman.” On another page, urban, middle-aged adults plow fields with primitive farm tools -- they’ve been sent for “re-education” among the peasants. And in another picture, seven bodies lie side by side in a ditch, shot in the name of revolution.

One of the most memorable pictures is a bold self-portrait of Li Zhensheng in his office at the Daily. He stands facing the camera, head cocked, ripping his shirt open to bare his chest in imitation of a “mythical movie hero.” The fearlessness and humanity Li shows in the photo speak to the strength of character that drove him to capture what he calls “the real image of the Cultural Revolution.”

Red-Color News Soldier is as much a historic document as a compelling personal tale. Between the photos, Li talks of his own life: betrayals at the hands of people he helped, years spent working hard labor and his own public criticism in front of his peers, to name a few things.

He doesn’t spare those who enacted cruelty, either. Of the man who started it all, he writes:

[I]f Mao had wanted to purge the president, he didn’t need to mobilize the masses to do it. But then if he’d had a more humanitarian thinking, everything would have been different, a different China, a different world. Only he forgot his humble peasant background, the very humanity he promoted in his writings, and as a result, all China suffered. And in a sense he also suffered. Yes, Mao was a victim of the Cultural Revolution, too: the fire he lit ended up swallowing him as well.

Red-Color News Soldier is available at the Library and from Phaidon, and the photos will be on display from August 7 through October 31, 2010.

Come take a glimpse into an era that has rarely been examined as thoroughly -- or as unflinchingly -- as it is in the photos of Li Zhensheng.

Photo 1: Front page of the Heilongjiang Daily the day after the execution of seven men and a woman in Huang Shan cemetery district. The vertical text on the right is Lin Biao's own calligraphy: "Rely on the helmsman while sailing on the seas; rely on Mao Zedong thought while taking part in the revolution."

Photo 2: At a mass rally organized by rebels in Provincial People’s Stadium, Party Secretary Wang Yilun and Li Xia, wife of Governor Li Fanwu are denounced, their faces and clothes splattered with ink, and their crimes spelled out on placards around their necks. Harbin, 29 August 1966