Here at the Kansas City Public Library, we like to think big. Brobdignagian books line our parking garage, baffling bloggers worldwide. Our collection is huge, numbering over a million titles. And as the 2010-11 Script-in-Hand season of free public plays shows, we like our drama big, too.

What’s big about Script-in-Hand? The abilities of the actors and directors from the Metropolitan Ensemble Theatre – which has produced this program for all of its’ five-year existence – are tremendous. And the plays they deliver each year are towering works of literature.

Indeed, each of the five plays in our “Big Ideas” series casts aside the small stuff and takes on the heavy lifting. It’ll make for some thrilling theater. And best of all, each performance is free and open to the public, thanks to the Friends of the Library, which has sponsored Script-in-Hand four years in a row.

The series begins this Sunday, November 21, with a performance of The Real Thing at 2 p.m. (RSVP online.) In this 1982 gem by Tom Stoppard, Henry, a frustrated London playwright struggles with his love life alongside his latest production. As the lines between Henry’s play and the reality on stage blur, the characters’ understanding of the big concepts -- art, life, politics, and language – are called into question.

Henry is to be played by Dean Vivian. His mistress in the play, Annie, is brought to us by Jan Chapman. Both are veteran local actors born to rattle off Stoppard's crisp, witty dialog. Indeed, Vivian and Chapman represent the type of talent that the Metropolitan Ensemble Theatre (“MET” for short) has in good supply.

Led by husband-and-wife team Bob and Karen Paisley, MET puts on regular plays throughout the year. But for Script-in-Hand, the company not only tailors its performances for the Library’s spaces, they embody what it means to interact with the books on the shelves. 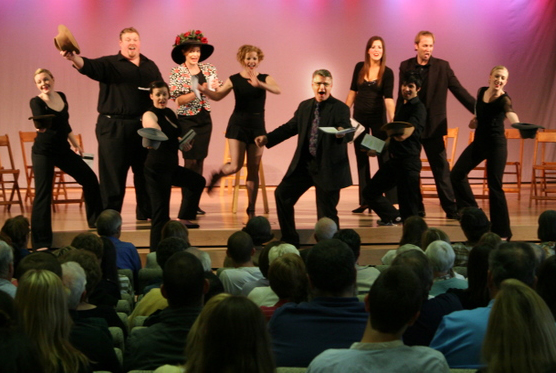 Chicago brought down the house during the 2008-09 Script-in-Hand season, which focused on Law & Literature.

“Most plays started as literature and then moved into the theatrical canon,” says Bob Paisley, who is directing The Real Thing. He points out that even the popular musicals that Script-in-Hand has produced, such as this year’s Guys and Dolls and last year’s South Pacific, were based on works of short fiction (by Damon Runyon and James A. Michener, respectively).

“The Library is much more participatory – it’s where people go to talk out loud on purpose,” she says.

Just as reading a book requires the use of imagination, watching a Script-in-Hand performance allows the audience to fill in the gaps. For each production, MET’s players rehearse for a week or two, learning the lines and blocking the movement – but expending no resources on trappings like costumes, sets, and lighting.

“There’s always an extra person in every show,” Bob says, “the audience member and his or her imagination.”

It’s theater in its purest form.

For the past four years, the Friends of the Library organization has sponsored Script-in-Hand. Friends president Jacobs – who is a fan of MET’s work in the community – says Script-in-Hand is not a hard thing to sell.

“They do great theater without all the extras, so you can focus your attention on what the play is: the words, the story,” she says. “They always bring great plays, ones that everybody needs to see.”

After each play in this year’s season, Friends members are invited to a backstage reception featuring the cast and refreshments. If you’re not a member, you can join online or by bringing the $25 Basic Membership fee (cash or check, please) to any of the performances.

Mark your calendar accordingly – with the exception of Fences, which has an encore at the Bluford Branch, each play has only one performance. So join the Friends, come see all five plays, and, while you’re at it, grab both volumes of Gibbon’s The Decline and Fall of the Roman Empire you’ve always been meaning to read.

Because as we say here at the Kansas City Public Library: go big or go home.