In advance of bestselling author Jasper Fforde’s appearance at the Plaza Branch on March 17, 2011, the Kansas City Public Library is giving away two first-edition hardback copies of his new book, One of Our Thursdays Is Missing, the latest installment in the Thursday Next series. The Library will give away both books via a random drawing facilitated by Twitter.

Both books will be available for pick-up by the winners at the event on March 17 (starting at 6:30 p.m. at the Plaza Branch, 4801 Main St.), during which time Mr. Fforde will autograph them.

To participate in this drawing, follow @KCPubLibrary on Twitter and respond to the trivia questions marked with hashtag #ffordeKC.

Answer: Pickwick is a dodo, cloned by Thursday Next. Congrats to winner @Lbrn1! 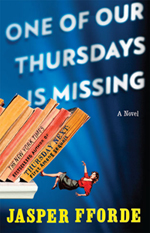 Question no. 2: "If you could transport into any book, which would it be, and what would you do?" (Tweet your reply to @KCPubLibrary and include the hashtag #ffordeKC.)

All responses should be tweeted as "@replies" to @KCPubLibrary and include the hashtag #ffordeKC.

Each winner will receive one first-edition hardback copy of One of Our Thursdays Is Missing.

Winners must pick up their prize at the event on March 17, so participants should be residents of the Kansas City area (or be willing to jump in the car or hop on an airplane). Please RSVP to attend this free public event with Jasper Fforde.

The Kansas City Public Library would like to thank the Penguin Group for making this possible.