To kick off the Library’s Titanic Weekend of events April 13-15, 2012, observing the 100th anniversary of the sinking of the R.M.S. Titanic, Kansas City rock and roll lifesavers Howard Iceberg & the Titanics are playing a free concert on the Rooftop Terrace at Central.

As the Friday, April 13, 2012, show marks the first time Howard and his band have played an actual Titanic-themed show, the concert is itself an historic event. At least, it will be for Howard, his band, and their loyal legion of fans.

Looking like they would fit in perfectly amid the roughshod rabble of third-class Irish travelers on the lower decks of the RMS Titanic, Howard Iceberg & the Titanics have been bringing boisterous rock with country and blues roots to local venues for 25 years.

He recently cemented his musical reputation with the release of the 105-song, 7-CD collection Welcome Aboard, which features the contributions of dozens of Kansas City musicians with whom Howard has collaborated as part of his years-long “ongoing recording project.”

At 65 years old, Iceberg (real name “Eisberg”) is winding down his career as an immigration lawyer. But his musical life is showing no signs of flagging. You can see Howard and the band (Gary Paredes, Pat Tomek, Scott Easterday, and Dan Mesh) rocking the night away just about any weekend at joints like the Record Bar, the Brick, and Davey’s Uptown.

At 6:30 p.m. on Friday, April 13, 2012, they make their Kansas City Public Library debut. They’ll play original songs and tributes to the sinking of the Titanic – including a brand-new song Howard has written especially for the occasion.

The show is free admission, and a 6 p.m. reception precedes the first downbeat. Free parking is available in the Library District garage.

Giveaway: Two tickets to Titanic: The Artifact Exhibition at Union Station will be given away at the event. RSVP by 5 p.m. on April 13 to be entered in the drawing.

We caught up with Howard last week for an exclusive KC Unbound interview.

KC Unbound: If you had been in the band on board the Titanic, would you have kept playing as the ship was sinking?

Howard Iceberg: Who knows what they’d do in that situation, but I hope we would. Once early on, when we were first playing under our identity of Howard Iceberg & the Titanics, I had the idea of putting out a CD titled Women and Children First and having our band dressed up as women and children on the cover, stepping into a lifeboat. [Laughs.] But hopefully we’d do the honorable thing and play out to keep things calm, give some sense of order, give some strength to the men to stay back. Hopefully, your better side would show up at a time like that.

So is this the first time you’ve played an event actually related to the Titanic?

Yes, it is. Although I recently ran into a guy who reminded me that at some show many years ago, we let everyone who wore a lifejacket get in free. He and his friends, who were teenagers at the time, wore lifejackets, and we let them in free, though don’t remember the actual show.

When were the Titanics christened?

Oh, geez. We’ve probably had some bottles cracked over our heads just like a ship christening. I’m just guessing 25 years under that name. 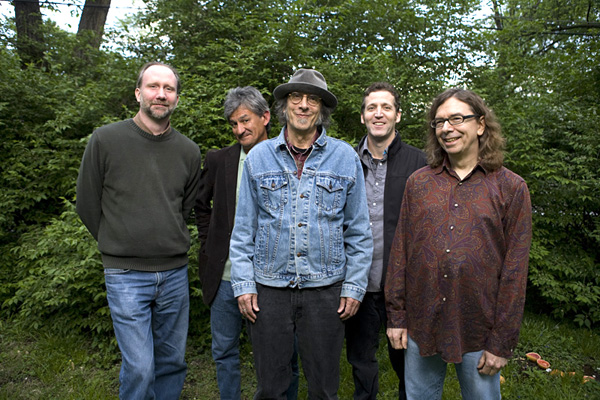 We hear you’ve written a song especially for the “Welcome Aboard” Library concert on April 13. Can you give us a teaser?

It’s called “Water, Water Everywhere,” and the chorus is “Water, water everywhere, and not a drop to drink.” It’s a blues-rock song, and it has the usual sinking-of-the-Titanic-themes: tragedy, mortality, the arrogance of human pride, and, of course, water.

How do you just rattle off a song like that?

When I have time, when I’m not preoccupied with work, I write two or three songs a week. My pal Chad Rex is getting married in May, and I just wrote a wedding song from him. In terms of technical proficiency in playing, I’m the weak link in the band. But songwriting just comes to me, and I write all the time. I shouldn’t put a hex on me, but I’ve written probably close to 1,000 songs and they just keep coming.

What are your inspirations outside of music?

Literature. I write both the music and the words. I listen to music in all different genres. I don’t care about what’s the latest thing, but whatever genre it is, I like to listen to what stands the test of time. But in terms of lyrics, I get most of my ideas walking around listening to people talk. I’m a fan of day-to-day colloquial speech, but also good literature. I get ideas from reading stuff. It may just be some little thing someone said in a book that will give me an idea for a theme. I’ll take that scene or that emotion and try to put it to words.

What books have you been reading lately?

I’ve been reading some Bukowski, some Elmore Leonard, Leaves of Grass, Graham Greene, collections of short stories by  F. Scott Fitzgerald and Joseph Conrad. I’ve been slowly going through Journey to the End of the Night by Céline, who I think has a great way with ideas and a very interesting, anarchist approach to life.

In my song “You’re the One I Want,” the tagline “she’s the one I need” was from a Hemingway book, The Sun Also Rises. In that book, the guy, Jake, is in love with someone, but because of a war wound, he’s unable to have the kind of relationship with her he needs. At first I thought it was weird: this guy was wounded in a certain way that gets in the way of his relationship, but I knew that Hemingway wouldn’t write a stupid book. In more metaphorical terms, it could mean any situation you’re in that you wanted to have a relationship that’s deeper in some way but for reasons that you can’t help, something prevents that.

What’s one book that changed your life?

I love books so much and I do so much reading. I read the Autobiography of Malcolm X at a very young age. It came out as I was finishing high school, and I loved the idea that someone could be born into one life and make a new identify for himself. What I got out of that book didn’t relate necessarily to his particular message or his struggle but the idea that you don’t have to be stuck with the identity and circumstances that you’re born into, that you can remake yourself – that had some influence on me a subconscious level.

What’s new on the horizon?

I’m continuing to write and record. It’s ongoing. At the time they threw that show for me last year (“Raising the Titanic” at Crosstown Station, June 26, 2011), I had to spend so much time mixing and mastering, I kind of stopped writing for four or five months. I’ve written about 50-60 songs since then. I’m trying to get songs documented and go through the songs that I like, continue to bring new people in, continue to work with new people while I can. I do feel father time creeping up on me. I’m in a race with him to get done what I can.

Howard, it’s an honor to have you come play the Library.

It’s our honor to go down with the ship