When Cleveland Lied – And Almost Died

In today's 24/7 news cycle, it's impossible to imagine President Obama boarding a yacht to undergo major surgery, disappearing for two days, and spending weeks recovering on a fishing trip with no explanation beyond a case of rheumatism, a toothache, and a much-needed vacation.

But in the summer of 1893, that's exactly what Grover Cleveland did. And even then, he barely got away with it.

In his new book, The President Is a Sick Man, Matthew Algeo, author of Harry Truman's Excellent Adventure, recounts the story of how Cleveland pulled the wool over the public's eyes regarding his debilitating health problems – and then vilified the reporter who had the gall to tell the real story.

Algeo gives a free presentation about his new book – the first full account of this relatively forgotten but culturally revealing period in our nation's history – on Tuesday, May 3, 2011, at the Central Library, at 6:30 p.m. (RSVP to attend.)

In 1893, America was in financial crisis. At the heart of the problem was the question: What was a dollar worth? Following the Civil War, the country was on the gold standard, but by the 1870s, gold production began to decline, and soon the country was mired in a "money failure," with not enough cash to go around.

In 1890, Congress passed the Sherman Silver Purchase Act, making silver-backed dollars abundant – and silver miners happy – but inflation rampant. Major businesses, including the mighty railroads, bled profits as the Eastern "goldbugs" battled the Southern and Western "silverites" for prominence. Algeo notes that "in pro-silver Kansas, there was even talk of secession." (L. Frank Baum's The Wizard of Oz is often interpreted as an allegory of the "Gilded Age.")

Such was the state of affairs when Cleveland was sworn in for his second, nonconsecutive term as President, in 1893 (Benjamin Harrison had served in the interim). Cleveland was intent on rallying Congress to repeal the Silver Purchase Act, but he had a problem: his health.

And his condition would make for some very bad public relations.

Just eight years earlier, retired general and former president Ulysses S. Grant had succumbed to a painful and highly publicized demise due to the ravages of squamous cell carcinoma – cancer – of the throat. It was the same form of cancer that Cleveland would discover on the roof of his mouth in June of 1893.

"In the nineteenth century," Algeo writes, "no diagnosis was as feared as cancer. It was tantamount to a death sentence. The very word was not spoken in polite company. It was commonly referred to as 'the dread disease' or simply 'the disease.'" 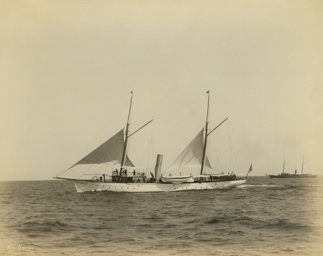 At a time of intense financial crisis, Cleveland, remembering Grant, rightly feared that the public's knowledge of his ill health would stoke panic over the country's economic sickness. Gathering a team of expert surgeons, Cleveland contrived to board a friend’s yacht, the Oneida (owned by rich New York financier Elias Benedict), and set sail for Long Island Sound, where, on July 1, 1893, he would undergo surgery in, he hoped, total secrecy.

What followed was an incredible tale of medical suspense, political intrigue, newspaper turf wars, and human drama. Cleveland had always built his political career on truth and transparency. During his first campaign for the presidency, when it was revealed that Cleveland had sired an illegitimate child, his policy had been to "tell the truth." And the public had loved him for it.

His reputation for honesty made his 1893 subterfuge that much easier to swallow. Algeo notes that despite his blantant lying, "Grover Cleveland was given the benefit of the doubt -- a benefit that modern presidents rarely enjoy."

However, one dogged reporter, E.J. Edwards of the innovative and reputable New Yorkdaily The Sun, got the real story -- and was punished for it. It wasn't until 1917, nearly a quarter of a century later, that a doctor's testimony confirmed the facts and vindicated Edwards.

Algeo's book is fast-paced, witty, and engaging. It thoroughly runs down the facts of the story but seasons them with a sly wit and winking irreverence -- after all, Algeo’s blog profile photo features him puckering up next to a cut-out of Cleveland.

So, for a rollicking look into a period in U.S. history that, though obscure, shines light on struggles economic, political, and journalistic that still characterize America as we know it, pick up The President Is a Sick Man.And don't miss the chance to see Algeo speak in person when he speaks at the Central Library on Tuesday, May 3, at 6:30 p.m.

Read an excerpt from Algeo’s book at ThePresidentIsaSickMan.com. And let us know what you think: Should Cleveland have told the truth about his surgery and illness? What would you have done?