Worgul will present his novel at the Kansas City Public Library on Wednesday, August 11 at 6:30 p.m. Join us for some free burnt ends from Oklahoma Joe’s at the reception starting at 6 p.m., and then stay to hear about Worgul’s barbecue-based story of epic redemption.

Worgul’s novel features a variety of characters whose lives intersect at their local barbecue restaurant, called Smoke Meat by its regulars. Central to the plot are LaVerne Williams, owner of Smoke Meat and ex-ballplayer for the Kansas City Athletics (before the team moved to Oakland), and Ferguson Glen, an Episcopal priest and alcoholic who finds his own salvation through the glory of barbecue. A host of other characters round out the cast, including a local blues legend, a big-hearted developer, and a young man adopted into the Williams family through his work in the restaurant.

Smoke Meat is placed in the heart of downtown Kansas City, and Worgul’s realistic descriptions of local neighborhoods and barbecue establishments should ring true for Kansas Citians. Descriptions of Smoke Meat’s décor (or lack thereof) and casual neighborhood ambiance will remind readers of the hole-in-the-wall barbecue joints that propelled Kansas City’s barbecue scene to national fame. The locale may be all-American, but Worgul’s approach is tempered with a measure of realism: local issues such as urban redevelopment and race relations profoundly affect the lives of his characters.

In its wide-ranging narrative, Thin Blue Smoke deals with redemption, faith, interpersonal relationships, and, of course, barbecue, which serves as an extended metaphor throughout the book. As Worgul explained in a recent interview, his characters’ stories of personal development have a lot in common with the making of the meat:

It takes a long time to make barbecue. And traditionally the meat used to make barbecue are the “meanest cuts” — the less desirable cuts of a steer or a hog. … [Barbecue pioneers] learned that the “low and slow” method of cooking rendered the toughest meat tender and smoky and absolutely delicious. They learned to make do with what they had. They learned that with patience, hard work, and grace, you can make a tough situation better. That if you wait, tend to your fire, and have faith, something good will come of it.

This process serves as a metaphor for the characters’ development. Though they are given difficult situations to deal with, time, patience, and faith work their magic to transform negative circumstances into positive results.

Worgul handles serious themes with a hefty dose of humor and a bit of barbecue editorializing – for example, readers learn that “barbecue,” not “barbeque,” is the correct spelling. Worgul would know, too; he’s an expert on barbecue history and director of marketing at local favorite Oklahoma Joe’s. 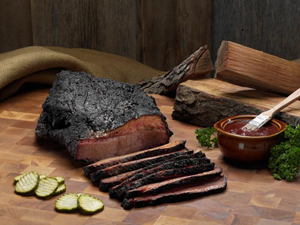 Little disputes like this are characteristic in Kansas City; as the local media is quick to point out, residents take their barbecue very seriously. It’s little wonder given that Kansas City is home to more barbecue restaurants per capita than any other city in the United States. The city is also home to the American Royal barbecue competition and the Kansas City Barbeque Society, whose spelling Worgul would certainly take issue with.

Want a dose of barbecue culture and a taste of Kansas City’s famous cuisine? Come hear Doug Worgul at the Central Library on Wednesday, August 11 at 6:30 p.m. Admission is free. A 6 p.m. reception precedes the presentation. RSVP online or call 816-701-3407. Free parking is available at the Library District Parking Garage at 10th & Baltimore.

Postscript: Go to the Kansas City Public Library's Facebook page for a chance to win a free copy of Worgul's book and a $25 giftcard to Oklahoma Joe's.