All locations will be closed from Thursday, Nov. 26 to Monday, Nov. 30 (reopening Tuesday, December 1) to allow extra time to prepare, coordinate and ensure adequate staffing amid rising cases of COVID-19. Get the latest updates on the Library's COVID-19 response

Amazing Response for Sandra Day O’Connor at the Library!

Over the last 6+ years, the Kansas City Public Library has sought to transform the way the people of greater Kansas City use libraries to stay informed about current events and learn more about landmark moments in history with an aggressive schedule of programs featuring scholars, authors, and public figures made possible in large part due to a generous grant from the Ewing Marion Kauffman Foundation. The response has been overwhelmingly positive with more than 14,000 people subscribing to the Library’s monthly print calendar of events and some 13,000 receiving weekly email updates.

On Monday, June 3, 2013, the Library (along with our partners at the Truman Library Institute and the Federal Court Historical Society) hosted retired Supreme Court Justice Sandra Day O’Connor for a discussion of her new book Out of Order. The Library received nearly 1,400 RSVPs, declaring the free admission event a “sell out” two weeks before her appearance. Close to 1,000 people actually attended the event, filling the Central Library in downtown Kansas City with 500 people in the live viewing area and another 400+ in closed-circuit viewing areas in two mezzanines, an exhibit gallery, and the Grand Reading Room.

Central staff responded to this unprecedented turnout. Members of the Public Affairs and Facilities departments, joined by a dozen librarians, ensured that the process went smoothly and Library officials received rave reviews about the event and outstanding public service provided by those working the event. 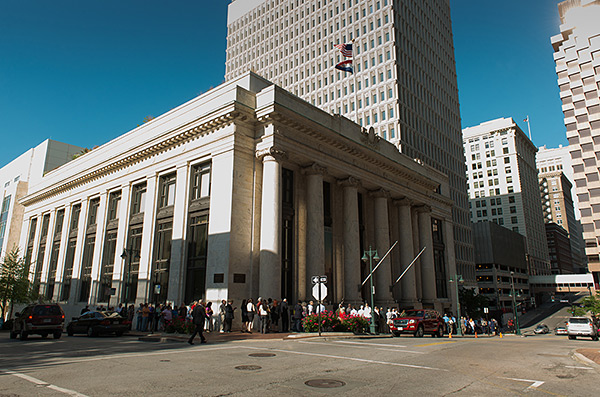 Lining up to enter the Central Library - Photo courtesy of Mark McDonald.

The first woman appointed to the Supreme Court of the United States, O’Connor has learned firsthand the inner workings, history, evolution, and influence of the nation’s highest court.

The retired justice—who at 83 exhibits an energy level that keeps even her protective escort of U.S. Marshals busy—shared those insights in a presentation that combined personal insight with some big laughs. 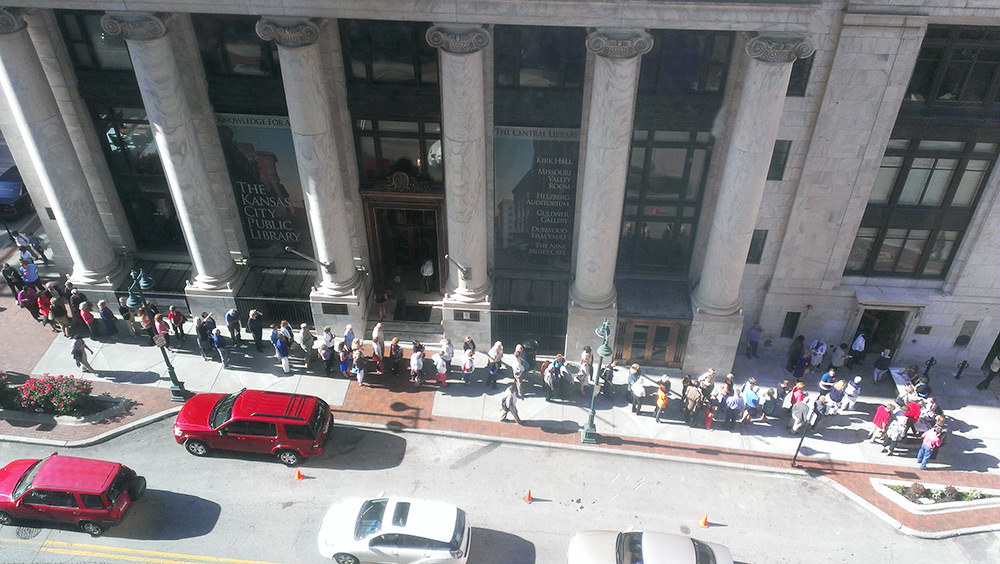 The line wrapped around the Central Library - Photo courtesy of Amanda Graor. 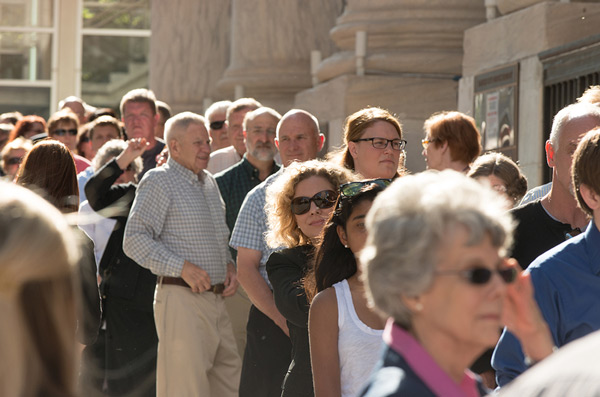 Crowds waited outside before the event - Photo courtesy of Mark McDonald.

Out of Order sheds light on the 200 years of change and upheaval that transformed the Supreme Court from its uncertain beginnings into the remarkable institution we know today. From the early days of circuit-riding—when justices traveled thousands of miles each year on horseback to hear cases—to the changes in civil rights ushered in by Earl Warren and Thurgood Marshall, O'Connor weaves together stories and lessons from the Court's past.

Born to a ranch family near El Paso, Texas, Sandra Day O'Connor grew up on the Lazy B cattle ranch near Duncan, Arizona. She received her B.A. and law degree from Stanford University. Nominated by President Ronald Reagan as an associate justice of the Supreme Court, she took her seat as the first female justice in 1981. O'Connor retired from the Supreme Court in on January 31, 2006. 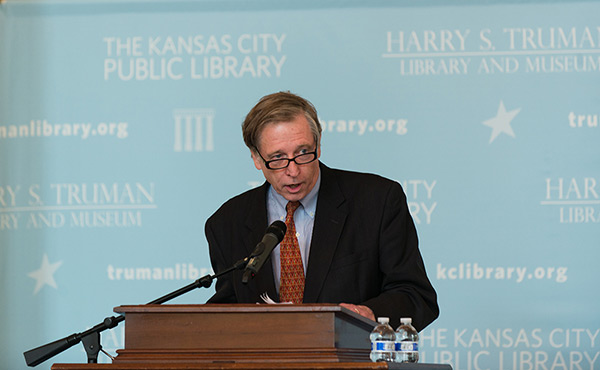 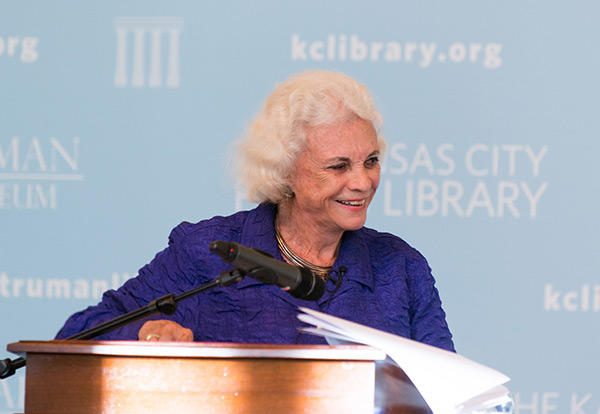 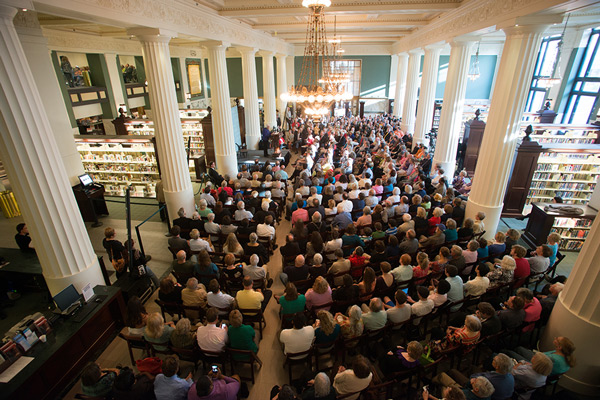 Kirk Hall was filled to capacity for Justice O'Connor's talk, as were several overflow rooms within the Library - Photos courtesy of Mark McDonald.

Justice O’Connor was the biggest headliner at the Library this week, but hardly the only one. On Tuesday (June 4, 2013), the Library hosted Steve Coll for a discussion of his new book Private Empire; and on Wednesday (June 5, 2013), Cynthia Kierner discussed the life and legacy of Martha “Patsy” Jefferson Randolph. More than 250 people attended Coll’s talk and another 300 were on hand for Kierner’s presentation.

View more photos from this event on our Flickr page.

Want to know about other programming at the Kansas City Public Library? Check out our future events on kclibrary.org, and sign up for our weekly emails so you can always stay on top of what is happening at the Library!

Liesl Christman is the Digital Content Specialist for The Kansas City Public Library, managing content for the Library's blogs and social media accounts. She is an unabashed enthusiast of comic books, roller derby, and all things food.