These books at the library explore Latin American sayings and proverbs, folktales, arts and crafts.

For adults | For kids

These books examine how we can preserve and restore our historic buildings—why historic preservation adds to the vibrancy of contemporary neighborhoods and cities.

Related event:
The Midland and Mainstreet Theatres Reconstruction, May 27

Adventures with Old Houses
By Richard Hampton Jenrette
This is the story of one man's adventures in acquiring and bringing back to life some of America's most enticing and historically significant dwellings. This uniquely personal account of the quest, the acquisition, the restoration, and the furnishing of each property is instructive and entertaining. Along the way, he introduces the artisans, curators, furniture specialists, designers, antiquarians, preservationists, and collectors who have played a part in his Adventures with Old Houses.

If you’re in the mood for a page-turning mystery, take a look at these recent winners of the Edgar Awards and Agatha Awards.

Best Novel
Blue Heaven by C.J. Box
A 12-year-old girl and her younger brother are on the run in the Idaho woods, pursued by four men they have just watched commit murder – four men who know exactly who the children are.

Best First Novel by an American Author
The Foreigner by Francie Lin
A noirish work about family, fraternity, conscience, and the curious gulf between a man's culture and his deepest self, The Foreigner is a darkly comic tale of crime and contrition, and a riveting story about what it means to be a foreigner – even in one's own family.

Learn all about William Allen White, the famous newspaper editor from Emporia, Kansas, and close friend of President Theodore Roosevelt, in these books at the Library.

Related event:
Meet the Past: William Allen White, May 19

These books at the library explore the history of The Church of Jesus Christ of Latter-Day Saints.

The Mormon Trail: Yesterday and Today
By William E. Hill
Part history, part resource book, part guide, and part photographic essay, The Mormon Trail Yesterday and Today is a reference for readers of all ages who are interested in the Mormon trek west. Driven from their home in Nauvoo, Illinois, Mormons, under the leadership of Brigham Young, began in 1846 their journey west to an expected haven in the Great Salt Lake Valley. The first party arrived there in July 1847. Thousands of members and converts later followed the Mormon Trail. This book includes a chronology of trail-related events, excerpts from diaries and guidebooks, songs, historical maps, over 200 then and now illustrations, descriptions of major museums and displays on the trail, and recommendations for further reading. 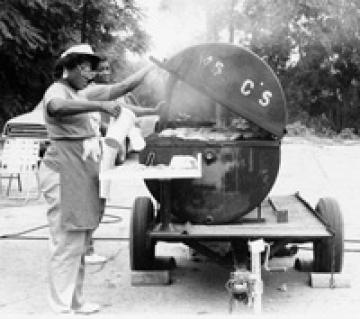 Barbecue and Kansas City go hand-in-hand. Doug Worgul has written The Grand Barbecue: A Celebration of the History, Places, Personalities and Technique of Kansas City Barbecue that explores everything BBQ in KC.

Find out the secrets of the Kansas City Barbeque Society in Barbeque -- It's Not Just for Breakfast Anymore: A Collection of Favorite Barbeque Recipes from the Society Members. This cookbook includes a history of the society as well as recipes for beef, pork, seafood, lamb, and much more.

Read all about the tumultuous life of Mary Todd Lincoln, wife of Abraham Lincoln, in these biographies at the Library.

Mrs. Lincoln: A Life
By Catherine Clinton
In this biography, Catherine Clinton draws on important new research to illuminate the remarkable life of Mary Lincoln. Mary Lincoln's story is inextricably tied with the story of America and with her husband's presidency, yet her life is an extraordinary chronicle on its own.

The Lincolns: Portrait of a Marriage
By Daniel Mark Epstein
This fascinating work on the Lincoln marriage by a noted historical biographer sheds new light on both the personal and political lives of one of American history's most important couples.

These memoirs of the war in Afghanistan provide firsthand accounts of those who experienced it and can help provide insight into the conflict.

One Bullet Away: The Making of a Marine Officer
By Nathaniel Fick
A former captain of the U.S. Marine Corps First Reconnaissance Battalion unveils the process that makes Marine officers such legendary leaders and shares his hard-won insights into the differences between the military ideals he learned and military practice, which can mock those ideals. One Bullet Away never shrinks from blunt truths, but it is an ultimately inspiring account of mastering the art of war.

These books at the Library explore the fate of news publications in our digital media society.

Related events:
"Democracy and the Decline in Local Reporting," June 4

American Carnival: Journalism under Siege in an Age of New Media
By Neil Henry
Journalist Neil Henry confronts the crisis facing professional journalism in this era of rapid technological transformation. American Carnival combines elements of memoir with media research to explore critical contemporary issues ranging from reporting on the Iraq War, to American race relations, to the exploitation of journalism by advertisers and politicians. Drawing on significant currents in U.S. press and social history, Henry argues that in an age marked by fraud in many institutions in American life, the decline of journalistic professionalism sparked by the economic challenge of new media has especially serious implications for democracy.

Are you a fan of cult films? These books examine some of the best. Or take a peek at a few films featured in “The New Cult Canon” series published for The A.V. Club, the arts and entertainment section for The Onion.

Animator, film maker and entrepreneur, Walt Disney transformed the film and entertainment industries. Learn more about this American icon and his art in these books at the Library.

Biographies | His art | His impact

Related event:
Meet the Past: Walt Disney, May 5

Walt Disney: The Triumph of the American Imagination
By Neal Gabler
The author whose biography of Walter Winchell was named best nonfiction book of 1994 by Time now presents the definitive biography of one of the most important figures in 20th-century American entertainment and culture.

Read more
What Are the Odds? Books on Randomness & Probability
Friday, April 24, 2009

These books at the Library explore the nature of randomness and probability in our lives.

The Drunkard's Walk: How Randomness Rules Our Lives
By Leonard Mlodinow
In this irreverent and illuminating book, acclaimed writer and scientist Leonard Mlodinow shows us how randomness, change, and probability reveal a tremendous amount about our daily lives, and how we misunderstand the significance of everything from a casual conversation to a major financial setback. As a result, successes and failures in life are often attributed to clear and obvious cases, when in actuality they are more profoundly influenced by chance.

Whether or not you piece with the best of them, these books should appeal to anyone interested in the beauty and craft of quilting. For you quilters, check out some of the library’s books of quilt patterns. And if you like to stick to fiction, there’s a whole genre of quilting novels.

Masters: Art Quilts
By Martha Sielman
These art quilts showcase such versatility, innovation, and beauty that readers can't help but be truly inspired. The gifted artists come from across the globe – including Africa, Asia, Europe, and North America – and their work displays their varying sensibilities, backgrounds, and talents. Sielman contributes an illuminating essay for each of the 40 featured artists, who are showcased in eight-page features.

The 2009 Pulitzer Prize winners were announced on April 20. Check out this year’s award winners or browse through the winners of previous years to find some good reads.