With March Madness arrives an equally important event, Booketology, the Kansas City Public Library’s annual tournament! Last year, books fought to the bitter end. It was genre against genre, literary masterpiece vs. best seller. In the end, To Kill a Mockingbird took the championship. This year, your favorite characters are getting in on the action. Voting is closed, find out the winner here!

We have selected eight genres, and in each, eight literary characters. You decide who wins it all. From Thursday, March 21 through April 8, you can vote for your favorite champion.

You’ll also be entered into a drawing for tickets to the College Basketball Experience as well as copies of our "Elite 8" characters’ books! More information is in The Rules below. 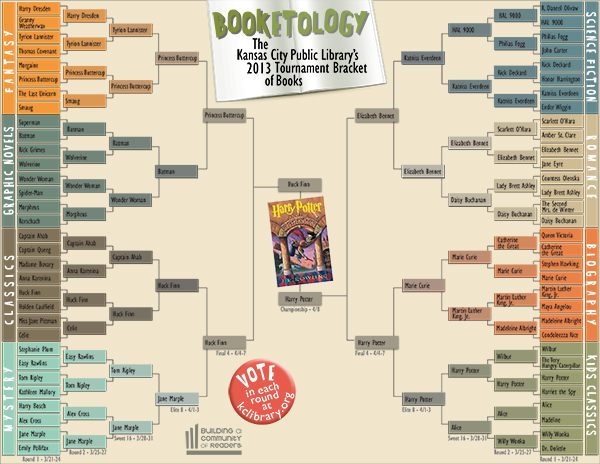 Click the image above for the larger, printable version and play along at home! (choose File>Print Preview to scale the bracket to fit on one page when printing)

Not sure who a character is? Click their names below to find out!

It’s Captain vs. Captain when Ahab takes on Queeg. Which bitterly disappointed wife will win, when Madame Bovary is pitted against Anna Karenina? The young rebels face off: Huck Finn battles Holden Caulfield! And a heart-wrenching decision must be made when Miss Jane Pittman takes on The Color Purple’s Celie!

Round 1 pits the magician Harry Dresden against the witch Granny Weatherwax! Halfman Tyrion Lannister battles against the leper Thomas Covenant (though both are far more awesome than their titles suggest). Morgaine from Mists of Avalon squares off against The Princess Bride’s Princess Buttercup, and The Last Unicorn fights The Hobbit’s Smaug!

It’s an epic match-up! Superman takes on Batman! Rick Grimes puts his zombie-killing skills to the test against The X-Men’s Wolverine! It’s the Lasso of Truth vs. web-shooters when Wonder Woman challenges Spider-Man, and the Endless take on the Minutemen, when Morpheus fights Rorschach!

Honor Harrington puts her tactical skills to the test against the Blade Runner himself, Rick Deckard! It’s rock ‘em, sock ‘em robot time when R. Daneel Olivaw takes on HAL 9000! And let’s not forget the teenagers: It’s a game for their very survival when Katniss Everdeen takes on Ender Wiggin! Finally, the kings of late 19th and early 20th century Science Fiction face off, when Phileas Fogg goes up against John Carter!

Romantic characters square off! Scarlett O’Hara tries to blow away her competition, Amber St. Clare! It’s Glib vs. Glum, when Elizabeth Bennet takes on Jane Eyre! The free spirits try to outdo each other, when Countess Olenska challenges Lady Brett Ashley! And will the Second Mrs. de Winter live up to expectations when she takes on Daisy Buchanan?

Sometimes an historical figure’s literary presence takes on a life of its own: It’s the battle of the biographies! Royals Queen Victoria and Catherine the Great duke it out! Whose scientific contributions will reign supreme, when Stephen Hawking challenges Marie Curie? Both have struggled for Civil Rights, now they take on each other! Decide who is more eloquent when Martin Luther King, Jr. debates Maya Angelou! And it’s Secretary of State vs. Secretary of State: Madeleine Albright wars with Condoleezza Rice!

Who says kids can’t get in on the action? Charlotte’s Web Wilbur tries to take a bite out of The Very Hungry Caterpillar! Who will win, when Harry Potter challenges the unrelenting Harriet the Spy to a duel? Will it be a Wonderland for Alice when she takes on the fearless school girl Madeline? And the quirky geniuses compete when Willy Wonka battles Dr. Dolittle!

Booketology is part of Building a Community of Readers, a campaign to transform our community by promoting a lifelong love of reading!

Liesl Christman is the Digital Content Specialist for The Kansas City Public Library.