Classics Reviewed: The Fire Next Time by James Baldwin

Talk about synchronicity. When I decided that I was going to re-read James Baldwin’s The Fire Next Time for the Library’s Building Bridges Book Club, I already happened to be reading Henry Louis Gates’ Thirteen Ways of Looking at a Black Man, a collection of profiles of prominent African-American men.

The first profile in Gates’ book is of James Baldwin, whose writing Gates fell in love with while in high school (Gates even got in trouble with his teacher for using too many commas in imitation of Baldwin’s architectural style) and whom he finally got to meet as an adult.

Baldwin had been so highly regarded as one of the voices of Black America in the early ‘60s that Time magazine featured Baldwin on its cover when The Fire Next Time was published. But by the time Gates met him, Baldwin had been bypassed in favor of more radical voices.

Baldwin fell into the shadows in his later years because the time called for strong and strident voices, whereas he had always been very careful in his language and balanced in his thinking. For Baldwin, there were no easy answers – he’d likely do poorly in the current sound-byte political climate – and his style reflects that careful consideration and reflection on ideas.

The Fire Next Time, an essay of about 50 pages or so, depending on the edition, is written as a letter to his nephew, James, on the occasion of the 100th anniversary of the signing of the Emancipation Proclamation (January 1, 1863).

The title of the essay comes from words quoted at the end of the essay – they come from a Black Spiritual, “Mary, Don’t You Weep.”

No more water, the fire next time.

In the essay, Baldwin evaluates the situation of blacks in America a century after the Emancipation Proclamation supposedly gave blacks their freedom. The situation in 1963 was not encouraging; the Civil Rights Act of 1964 and the Voting Rights Act of 1965 were still in the future, and there is still some doubt that such legislation would have passed with John F. Kennedy as president. 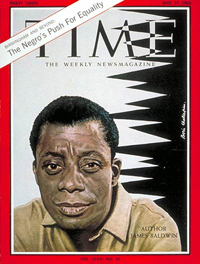 Baldwin graced the cover of
TIME in 1963.

Addressing his nephew, Baldwin points out that much of the difficulties of black life in a white dominant country are already known to the young man. But here, Baldwin reveals his background as a Christian minister in his teenage years – all of those difficulties are not a cause for despair. Baldwin sees the hatred of racism as largely self-hatred; the exploitative nature of the ruling class has filled them with guilt, and they project this self-loathing onto the minorities.  Such a warped view of the humanity and worth of blacks, though, needn’t and shouldn’t be accepted as true, especially by the blacks themselves.

Baldwin reflects on his own experience as a teenage Christian minister; his motives for entering into ministry were not the highest. He fled to the church in part because it offered apparent safety from the dangers of the street, a counter to the hustlers and the dealers. Once he became a  minister, he found that his position gave him some independence from his father and some power to counter him.

Though he dismisses much of organized religion as a game or a gimmick, it is clear that the spirit of religion is very much part of his heart and soul. The problem is not what Jesus taught, but our failure as a country to live up those ideals, and the ideals enshrined in the Declaration of Independence and the Constitution.

Still, he does not advocate a more militant approach, such as that advocated by Malcolm X and Elijah Muhammad. For Baldwin, the answer is not two countries, one black and one white, but one country united in justice. A separatist position is an admission that such unity is impossible.  And while he admits that achieving such unity may seem impossible, he proudly states:

I know that what I'm asking is impossible. But in our time, as in every time, the impossible is the least that one can demand—and one is, after all, emboldened by the spectacle of human history in general, and American Negro history in particular, for it testifies to nothing less than the perpetual achievement of the impossible.

I find myself hoping with Baldwin for an impossible achievement, but also worrying about the devastating effect of continued injustice in the world. If you haven’t read this work before, do read it – the message is urgent and compelling. As a bonus, and not to be belittled, Baldwin’s prose is very beautiful, with all the cadence and power you’d expect from the preacher he had been.

Bernard Norcott-Mahany is our resident connoisseur of classic literature and a technical assistant at the Lucile H. Bluford Branch of the Kansas City Public Library.

Find out more about the Building Bridges Book Club, a unique book experience at the L.H. Bluford Branch focusing on classic black literature. The group will be discussing The Fire Next Time on Sunday, April 10, 2011 at 3 p.m. Complete a Reader Profile form to attend.