Before the days of TV and radio, merchants caught customers' eyes with brightly printed, alluring advertising trade cards for all kinds of products in the new, manufacturing-driven economy. The trade card explosion of the late 1800s was a short-lived but significant phenomenon, and the Missouri Valley Room holds nearly 1,000 such artifacts, including more than a few that highlight that most wonderful time of the year for advertisers – the Christmas holidays.

In addition to providing a rich resource for researching the history of printing, advertising, medicine, and fashions in late 19th century culture, the Missouri Valley Room’s collection of advertising trade cards gives a glimpse into the history of early Kansas City companies. The Kansas City Public Library received a Library Services and Technology Act (LSTA) grant from the Missouri State Library to digitize these trade cards.

Read on for a few choice selections, and explore our digital collection to find more advertising trade cards from our city’s past.

Eating "delicious crackers and pure candies" may be just the cure for chilly nights in Kansas City. At least, that’s what the Corle Cracker and Confectionery Company of Kansas City wanted its customers to think. In the 1880s, Corle used the angelic advertising card above (click for larger image) to entice shoppers to purchase its products during the holiday season.

The Corle Company incorporated in 1880. In 1885, Jacob Loose bought the company and changed the name to Loose Brothers Manufacturing Company. Later, in 1890, the name changed again to the American Biscuit Company. In 1902, business began anew when Jacob Loose and his brother John joined with John Wiles to form the Loose-Wiles Biscuit Company adopting Sunshine Biscuits as the brand name. 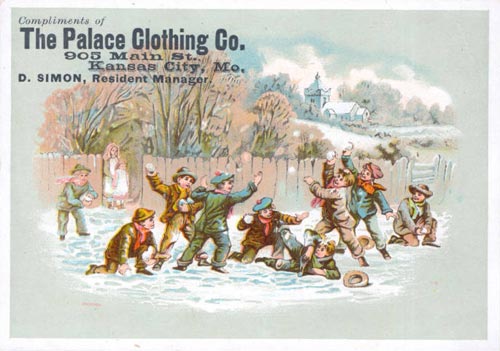 Another early Kansas City company, The Palace Clothing Company, began business at 905 Main Street. The company’s owners, Henry A. Auerbach and Henry Guettel, selected this advertising card hoping shoppers would come into their store for winter clothes. In 1924, the clothing company moved to 12th and Grand into an eight-story building designed by Frederic E. McIlvain. It remained one of the largest clothing stores in the country until the 1960s. In 1971 the building interior was transformed into office space but the original façade was maintained. Today, the words “The Palace Clothing Co.” can clearly be read on the exterior. The building is on the National Register of Historic Places.

(Sometimes the pictures on the advertising cards had little relation to either the company or the product. The next two cards are good examples.) 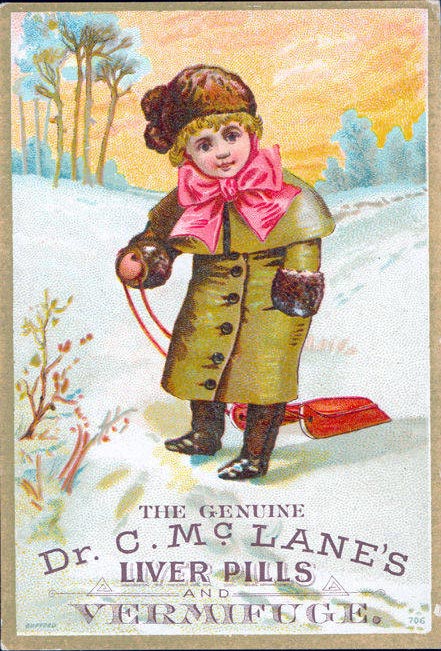 Mr. W. H. Collins, owner of the City Drug Store at 4th and Main, advertised that he carried Dr. C. McLane's Genuine Liver Pills and Vermifuge. As you can infer from the anecdote on the back of this colorful, cute card, vermifuge is a medicine designed to rid the body of intestinal worms. 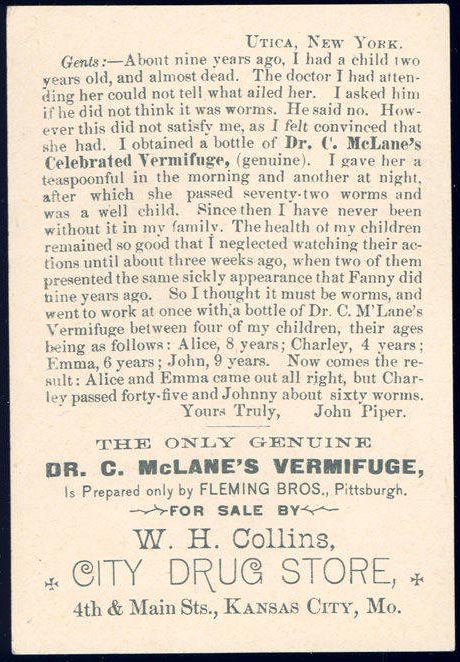 According to Robert Jay, author of The Trade Card in Nineteenth-Century America, "Patent medicine businesses. . .made up the largest single category of card distributors." This is true, also, for the Library's collection of trade cards.

Deck the halls with boughs of holly. . . Swift & Company, a meat-packing company with a Kansas City plant, made so bold as to “deck” this woman with holly.

The reverse of this card promotes one of the meat-packing industry’s byproducts, wool soap. It clearly explains that this is a “toilet and bath” soap and is not for washing woolens.

Gustavus F. Swift, originally from Massachusetts, opened a meat-packing business in Chicago in 1875. The company’s headquarters remained there, but Swift knew it was profitable to be as close to the source of supply as possible. With that in mind, he opened the company’s second meat-packing plant in Kansas City in 1887. The entrepreneurial Swift realized he could not operate a business just in winter months, when it was safe to transport meat. An “ice box on wheels,” he thought, should solve that problem. Although several men had developed refrigerated cars, serious faults hampered their use. Swift took the best of the ideas, raised the money, and built 10 cars that became the forerunners of the refrigerator cars.

For more photographs and information about these companies or about the trade cards, please search the Local History Database.