How to Build a Community of Readers

Jackson County Juvenile Center has its share of discipline issues. But none of them occurred while Nick Holmes visited once a week last summer to read books to the young men incarcerated there.

"I gave all of them my respect, and I got it back," Holmes says.

Orlando (not his real name), a towering, 17-year-old "alpha dog," was especially a fan of the reading and discussion sessions.

"Orlando had never had a library card, had never checked out a book in his life," Holmes says. "I helped him check out his first library book in his name."

In the summer of 2010 while working part-time for the Kansas City Public Library, Holmes also visited four other locations as part of a grant-funded outreach effort developed by children’s, teen, and outreach services librarians for the Summer Reading program.

In all, Holmes signed up more than 500 kids – it's what Building a Community of Readers is all about.

Putting books in people's hands is a fundamental part of what the Library does.But with the launch of an unprecedented and ambitious campaign, the Library is becoming even more focused on making KC a city that reads.

"We want a community that is healthier, wealthier, and happier," says Library Director Crosby Kemper III. "And most of all, we want this to be an enlightened community that thinks of itself as engaging in ideas and working on continuous improvement."

The concept began over a year ago, when the Library Administration and Board of Trustees realized that not enough emphasis was being placed on, as Kemper says, "the most important thing we do -- reading."

In November 2009, new objective was introduced: Inspire and champion Kansas City as a community of readers.

Since then, the Library has already begun inspiring.

In the past year, initiatives such as the 2010 Big Read, the opening of the Bluford Health & Wellness Center, and the largest Summer and Winter Reading Programs in Library history have further established the Library's role as the center of knowledge and culture in the community.

Beyond the big programs, two-thirds of Library employees work directly with the public on a daily basis – whether it's checking out materials, answering reference questions, conducting public programs, recommending books, assisting with access to technology, or performing any of the wealth of public-service-oriented tasks librarians are known for.

"What we do is civilizationally important, and we don't always tell our staff and customers that story," Kemper says.

It's an established truth that people who read beyond the requirements of school or work do better in academics, launch more businesses, earn better incomes, become more engaged in civic affairs, and are likelier to support the arts and humanities. 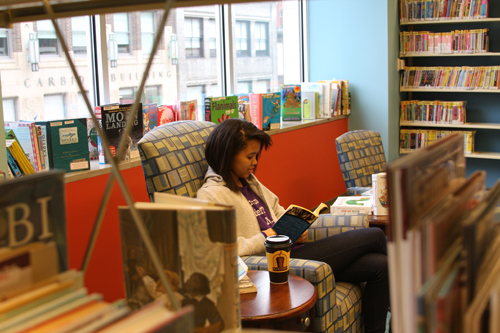 Kellan Appollis, 14, is a card-carrying member of our Community of Readers.

Building a Community of Readers is under the direction of Claudia Baker, director of development. In concrete terms, it’s a three-to-five-year campaign that will accomplish objectives including increasing total circulation to a pace that will put the Library in the top ten public libraries nationally, achieving an 80 percent penetration rate (defined as people having or using a Library card in the past 12 months), and increasing participation in Summer and Winter Reading by 23 and 10 percent, respectively.

Funding for the campaign will be sought from foundation and government grants, corporate sponsors, and individual donors. So far, the Sosland Foundation of Kansas City and the Arvin Gottlieb Charitable Trust and Foundation have made significant commitments, and the Library is in conversation with other foundations as well as individual and corporate donors and is expecting positive outcomes in the months ahead.

"People have fond memories of libraries," Baker says. "When I talk to donors, they almost always mention their childhood connection to books and libraries."

That connection is being established every day we're open for business.

It's there when the Trailblazers book group convenes in Independence, and when the KC Metro Poets swap verses in Westport. It's there when the librarians of the H&R Block Business & Career Center find a book that will change a budding entrepreneur's life.

And it's there when someone like Holmes opens up a book to read before to a pack of restless kids.

"Sharing stories, active discussion - that's what it's all about for me," he says.