Kenneth Armitage knows his marmots. Though he spent much of his 40-year academic career at the University of Kansas studying the yellow-bellied marmot or “rockchuck,” he’s enough of an expert on the burrowing beasts that he’s featured in the bonus materials of the 15th Anniversary Special Edition DVD of the hit ‘90s comedy Groundhog Day.

KC Unbound recently caught up with Dr. Armitage, professor emeritus of behavioral ecology at KU, to get the lowdown on marmots, including how they are dealing with climate change, and whether or not their shadows can tell us anything about the length of winter.

This year, it seems that Punxsutawney Phil has predicted an early Spring -- he did not see his shadow upon emerging from his den in Gobbler's Knob, PA. Were he in KC, however, he'd probably be unable to exit his burrow because of all the snow. And, unfortunately, due to the inclement weather, Dr. Armitage's lecture at the Central Library on Wednesday, February 2, at 6:30 p.m. has been canceled.

Read on to learn more about marmot biology and the history of Groundhog Day.

KC Unbound: What’s the difference between a marmot and a groundhog?

Kenneth Armitage: “The way I like to put it is, all groundhogs are marmots, but not all marmots are groundhogs. The groundhog is one of 15 different types of marmots. The one I studied is the rockchuck.”

Are there a lot of marmots in Kansas?

“That’s a good question. I don’t think anybody has any idea how many there are. The only marmot in Kansas is the woodchuck, or groundhog. They’re common enough in eastern Kansas, but they don’t get into western Kansas because they tend to live in a woodland-meadow borderland. Once you get away from the eastern woods, they drop out and are no longer around. They’re not a prairie species.

“I wouldn’t be surprised if there are some in Kansas City. I’ve seen them within a block of where I live in Lawrence. And I know they’re present where there are fairly large backyards. They dig a hole and forage in people’s gardens – they’re not popular for that reason.” [Laughs.]

Why did you decide to study marmots?

“I wanted to study the role of social behavior in population dynamics for a mammal, and most species of mammal are nocturnal and small, so to observe their behavior is virtually impossible. And of the ones that are active by day, most are small and down in the grass, and you can’t see them to study them. So it turned out that marmots are handy for studying, one reason being that they live in burrows and you know where to find them. Deer, for example, can wander over several miles, and they don’t form social groups, so you’re not sure where to find them. Marmots form social groups, you can find them readily, and you can see what they’re doing, so you can study them easily.”

What were you studying?

“Originally I started to study marmots because the species that I worked with in Colorado lives in social groups, and one of the biological questions we were asking at the time was, “Is social behavior an important mechanism in limiting the numbers of a population?” We noticed that animal populations don’t keep expanding – they don’t destroy their own food supply, and they keep their numbers in check. It was assumed that predation, disease, and bad weather might be factors, but it was also suggested that social behavior might limit animal numbers.”

What are some things you learned?

“What often happens when you get into a research project is that other questions keep coming up. For example, we learned, accidentally, that marmots cannot tolerate heat. They seem much better adapted to coping with a cold environment, so that raised questions about their physiology. How does temperature affect their metabolic rate? How does it affect their ability to obtain and use water? This is of interest because marmots do not drink – they get all of their water out of their food. And they hibernate for about eight months. That’s three fourths of the year. The woodchuck, on the other hand, hibernates for five months.”

You also learned that climate change is affecting marmots. How? 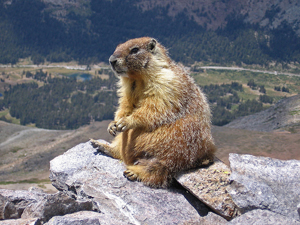 “The main thing is that it’s gotten warmer, so the snow is melting earlier in the spring, and that means the marmots are coming above ground and terminating hibernation earlier. They then reproduce earlier, and that gives them a little longer growing season. That means they get a little fatter, and that has resulted in an increase in the rate of survivorship. In the last 10 years, the marmot population has increased almost threefold. Quite dramatic. That’s mostly because of survival by the adult females. That’s been the main factor. They produce more young, and the total population goes up.”

Is it good or bad that the population’s increasing?

“I don’t think it is basically good or bad. I think marmots, at least in our area, don’t do any damage. I suppose if you look at it from the point of view of a red fox or coyote, there’s potentially more food for them, so they might look at it as a good thing. I don’t think from a human point of view we can say it’s good or bad. I think it’s just one of these natural changes that take place, but we can demonstrate that this change in numbers is associated with long-term warming – we were picking up signs of that in the 1970s. But the most dramatic climate changes have occurred since 2000. At this point, there’s no indication that marmots are going to go extinct because of climate change, but we have to wait to see how it plays out. But initially, global warming has been beneficial to North American marmots.

“It’s been devastating to some of the arctic species because of the disappearance of sea ice. Some workers looking at one of the marmots in Asia have found that climate change there has meant that the snow line has moved up the mountainside, and below that snowline, the marmots have died out. So in that case, that marmot species is declining in numbers.”

PDF: “Weather influences on demography of the yellow-bellied marmot” by Kenneth B. Armitage and Orlando A. Schwartz. The Zoological Society of London, 2005.

Is there any biological truth to Groundhog Day?

“No. To put it bluntly. [Laughs.] Well, let me put it this way: The groundhog has a 50-50 chance of making a correct prediction, which means if you flip a coin, you’ll have the same chance predicting whether it will be a shorter or longer winter as the groundhog would. There are a number of Groundhog Day predictions around the country, and in any one year some will be correct. Some will predict a long winter, and some will predict a short winter. Some will be right, some will be wrong.” 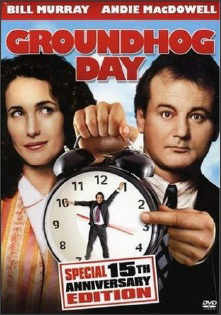 How did the Groundhog Day legend begin?

“The practice of trying to determine when spring would come probably started in medieval Europe. If you think back hundreds of years, we didn’t have long-term weather records, and farmers wanted some kind of a clue as to when they could start spring planting – should they get going or should they wait a while? February 2 happens to fall halfway between the winter solstice and spring equinox. And the legend developed that in Europe, on Candlemas day, when the hedgehog comes above ground (they used the European badger or the hedgehog) if he sees his shadow, it means six more weeks of winter. It would see its shadow on a cold, clear day, and you’d get those days in winter. But if the day was overcast, it might indicate moisture from a warm front, maybe an early spring.

“German farmers immigrated to North America, where there were no hedgehogs, but they saw this animal that lived underground and did the same thing. That animal could act as the same symbol as the hedgehog in Europe.”

Why do you think Groundhog Day has endured as a holiday?

“I think it’s publicity. It’s become a fun thing to do. I guess in recent years, maybe in the late 90s, a lot of comic strips began to parody or make some play on the Groundhog Day phenomenon – I’m going to show one in my talk. And there’s also Groundhog Day the movie, which is out on a reissued DVD. One of my colleagues and I have a segment on the disc. The film crew came out to our research area because they wanted something about biology, and they wanted us to be funny. But we weren’t trying to be comedians. We just took them out to look at some of our research sites to look at some marmots and say a bit about the biology.”

But now you can say you’re on a DVD with Bill Murray.

Got questions about groundhogs and other marmots? E-mail Dr. Armitage at marmots@ku.edu.