Bluford Branch is closed Wednesday, February 1st due to lack of water services.

KC Dads Are at Home at the Library

In shifting economic times, many men are finding themselves working a job they thought they’d never do: staying home with young children. For these fathers, planning activities for kids and socializing with other men in their situation can be hard. For the Kansas City At-Home Dads group, the Kansas City Public Library is a home away from home.

For the better part of the past two years, a diverse, rotating group of fathers and kids from all over the metro have been spending one morning each month in the Children’s Library at the Kansas City Public Library’s Central Library.

On a recent Friday morning, 10 or so of these KC Dads (as the group’s online shorthand goes) and their pre-school-aged kids stormed the Library for a session that included a visit from Santa, story time, crafts, music, and a movie – all of it tailored by Central Children’s Librarian Clare Hollander.

“As a children’s librarian, I’m these kids’ first teacher after their parents,” Hollander says.

For the KC Dads’ pre-kindergarten-aged kids, Hollander designs programs geared toward goals such as building vocabulary, improving narrative skills, and instilling a love for books and reading.

She also understands the unique character of this special group.

“These guys are a club,” she says. “They’re helping each other raise their kids.”

KC Dad Shannon Carpenter affirms that they are indeed a tight-knit group: “We're a bunch of guys who didn't know what to do or where to go, and we somehow found each other."

The group, which formed in 2002, is part of Daddyshome, Inc, national organization that provides resources and networking opportunities for an underserved -- and often misunderstood – group.

"You can find Mommy and Me groups everywhere, but resources for dads are rare," group member Mick Freyermuth says. "Social isolation can be more pronounced." 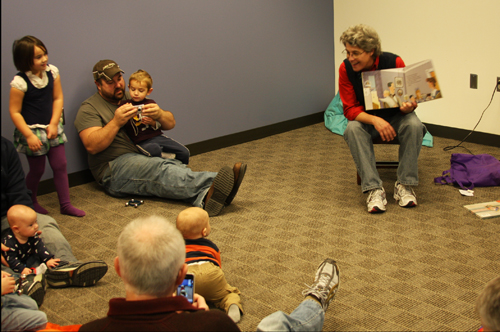 As Carpenter explains, most of the KC Dads are either out of work or are home by choice -- in the latter case, that's usually because mom’s paycheck can support the whole family, and it makes sense for dad to stay home with the kids. In other cases, the fathers may work odd shifts -- or may simply be looking for a way to become more active in their kids' lives.

Whatever the case, the Library has proven a fun and enriching destination.

On that recent Friday, as his five-year-old son and three-year-old daughter rocketed back and forth from the shelves finding books to check out, Freyermuth talked about how the Library provides a kid-friendly place where children can learn and dads can connect. And the ringleader of it all is undoubtedly Hollander.

“I can’t even put into words how well she treats us,” Freyermuth said. “She does a great job at picking stories that get the kids working together.

“Giving them a lifelong love of reading – that’s what’s important,” he said.

After visiting with Santa (played by – shhh – Library friend Mitch Elliott, husband of Dorothy Elliott, our deputy director of branches) and receiving gift-wrapped books to take home, the kids and their dads followed Hollander into a back room for stories and crafts. 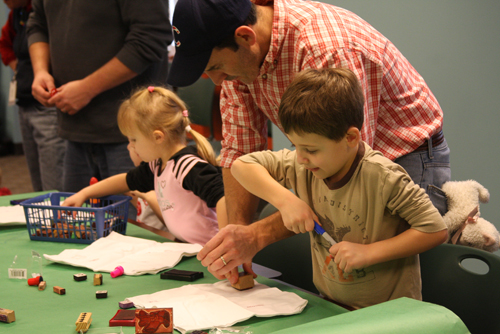 Though they were in a small, intimate space, all the dads seemed perfectly at ease – some even sprawled out on the floor with their little ones as Hollander read The Snow Globe Family by Jane O’Connor. Quite a few fathers snapped photos on their ever-present digital cameras.

Afterwards, the kids and dads decorated book bags with ink stamps – which invariably ended up on a few cheeks and noses.

Before heading down to the Film Vault for a movie, as the kids were taken on bathroom breaks, the dads caught their breath, welcomed one of the newcomers to the group, and discussed plans for the evening’s outing: a trip to see TRON: Legacy.

Because dads gotta have fun, too.