Art in the Loop Creators Draw Inspiration from History

Post date:
Thursday, September 14, 2017
While traveling along the Kansas City Streetcar route from Union Station to the River Market any time from May through September, you may notice new art installations and performances. They’re all thanks to Art in the Loop, a nonprofit organization dedicated to engaging artists in the ongoing revitalization of downtown.

The Kansas City Public Library began regularly hosting Art in the Loop performers in 2017. Beyond that, a handful of the artists used the Library’s Missouri Valley Special Collections for research that same year.

We talked to Thompson, Dahlquist, and Star about their use of the Missouri Valley Special Collections – what they learned while doing their research and what they hope people take from their Art in the Loop installations.
Lauren Thompson - Then & Now: Faces of KC

Thompson said she was inspired by a video of graffiti artists in New York City spray painting fences. She wanted to take that idea and expand on it.

“By putting historical photos on one side of the fence and current photos on the other side, passing by the fence is more than just a visual transition but also a transition through time,” she said.

Thompson said she and Evrard decided early on that they wanted some kind of commonality among the people, past and present, they featured, and “we eventually settled on focusing on arts and culture in KC.” 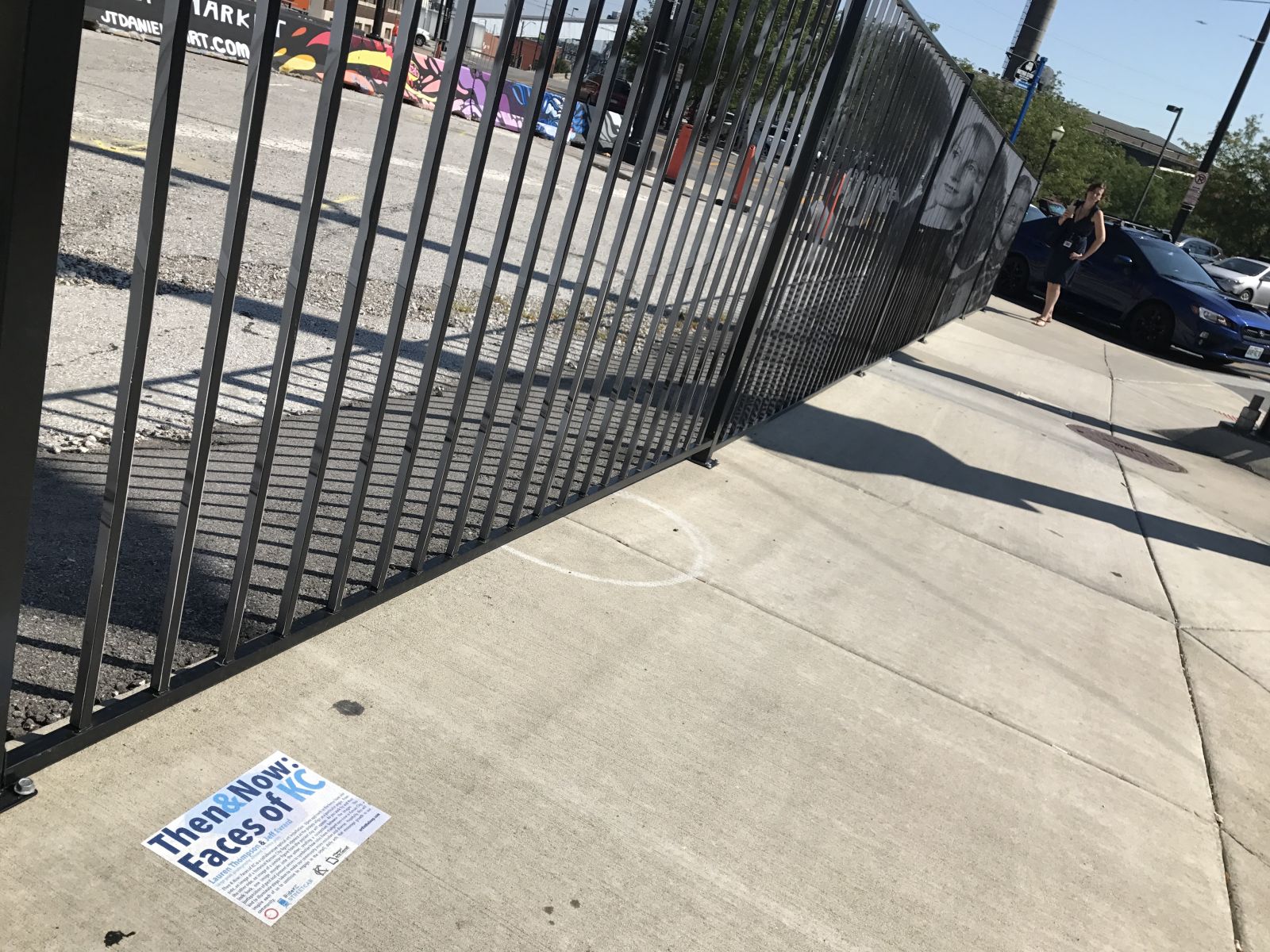 Thompson primarily used the search function on the MVSC’s website, KCHistory.org, and said she found it easy to find the types of head shots she needed. Once she and Evrard identified the images they wanted, they used the online order form and received digital files via email.

“The Missouri Valley Room’s digital collection also saved me a ton of time,” Thompson said. “I could search the online collection as my schedule allowed and the turnaround of getting images after I ordered them was very quick.”

The research was rewarding, Thompson said, and she learned something new about Kansas City’s history.

“The most surprising information I found was regarding the history of the McGee family in Kansas City,” she said. “One of the photos we used highlighted the mayor because our current mayor, Sly James, has been a great champion of the arts community in Kansas City. The historical photo we used was of Elijah Milton McGee, who was mayor in 1870. He was a developer in Kansas City and developed a hotel at 16th and Grand that was advertised for southern sympathizers. His family owned land located in what is now downtown Kansas City, and he is where McGee Street gets its name.” Chris Dahlquist - The History Vendor 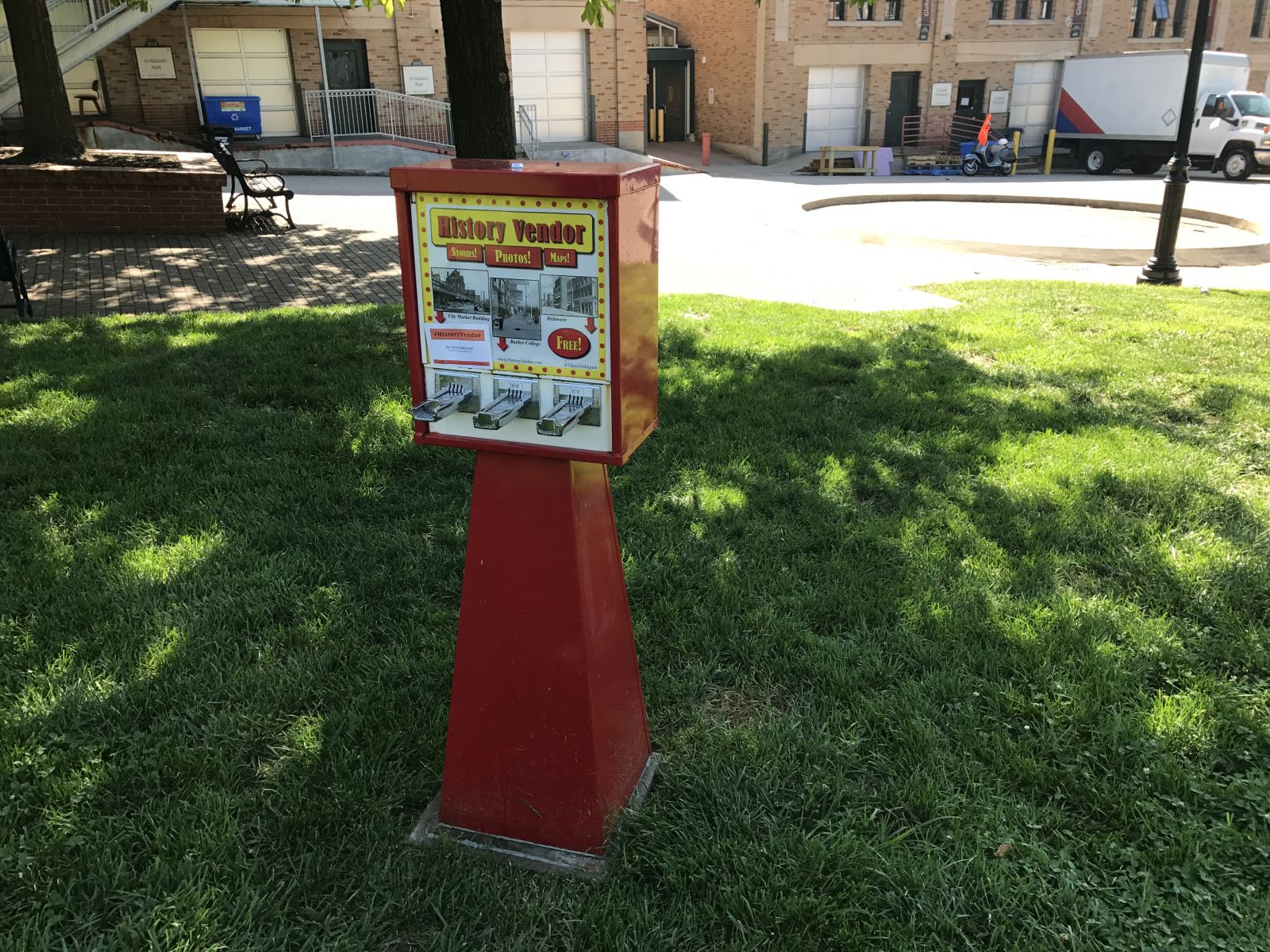 “I became aware of the Missouri Valley Special Collections when I purchased a property in Columbus Park and was given the 1940 tax record photograph of my property, including a photo of the blacksmith shop that once stood on the lot that makes up our yard,” Dahlquist said. “Through those photographs, I could “tour” my neighborhood in 1940, and I was fascinated to compare them to the present and discover what remained the same and what was changed. ” “For History Vendor, I spent days searching the online database of photographs, curating a collection of images that would span the River Market neighborhood both physically and chronologically.”

She then used MVSC’s Sanborn Maps and other resources to research what was happening in the photograph or at the time in the River Market.

Most helpful, Dahlquist said, was the Hargrave Photograph Collection, which features 173 black and white, 8-by-10-inch photographs from around 1920 to 1945 that depict scenes primarily in and around downtown Kansas City. They were originally designed to document accident sites for later use as evidence in lawsuits people had filed against the city.

“From a photo historian’s perspective, it was fascinating to see how, in the 1920s to ’40s, photography was used as a tool in the court,” she said. Sarah Star - Run the Town: A Civic Trail

Star said her inspiration for Run the Town came from personal experiences in exploring new cities while running.

Run the Town: A Civic Trail

“Often, I had no clue where I was going so I would just wind around the town, wondering if I was missing anything cool I could be running through,” she said.

She began her research by scrolling for hours through the MVSC’s online photos, looking for inspiration for her eight trailhead signs.

She wanted to highlight parts of town that people may not normally see and, in turn, learned some things.

“I am now the person at the party that says ‘did you know’ and then follows it up with a story of something I learned through my research,” she said. “My favorite is Doc Brown, the famous Cake Walker. Before this project, I had never heard of him and I didn’t know the intense racial history of cake walking,” a pre-Civil War dance originally performed by slaves on plantation grounds.

“There’s so much documented history about KC in this collection, and it shocks me when I tell people where I did my research and how easy it was because it was all already collected and available. They had no clue.”

All three creators hope that their works inspire others and create a newfound connection.

“I hope it helps to pull them out of the world of their cell phones and back into the physical world around them,” Thompson said. “I also hope that it helps increase people’s awareness of the rich history we have in Kansas City. When I travel to other cities like Chicago or New York, I find a big component of the success of these cities is the investment and promotion of their history. I hope that my installation can be a small part of contributing to that investment in our city.”

Said Dahlquist, “I hope participants in the History Vendor project have fun experiencing the River Market through a new lens. I also hope it inspires or re-inspires interest in the history of the River Market specifically and Kansas City in general, leading to more exploration into that history and the surroundings.”

Star, a Library lover all of her life, said her project wouldn’t have been possible without one.

“I hope that people see things in the illustrations, or in the photos from MVSC on my sign, and want to do their own searches,” she said. “… I hope that by interacting with a four-mile stretch of the city, they can gain a new sense of appreciation for the details that come together to make it whole. I hope that they think about what the land looked like thousands of years ago, then hundreds of years ago, and what it will look like in the future.”
By: Laura McCallister, Digital Content Specialist