Have you ever spotted letters in unlikely places? Perhaps it’s a crack in the sidewalk shaped like an “R,” or a bridge railing that looks like an “N.” Stephen T. Johnson’s Caldecott Honor book Alphabet City is full of images of ABC’s spotted in city scenes.

This week at the Library, we want you to hit the streets of KC to find your own letters in the landscape and share them with us on social media.

An award-winning artist and children’s book illustrator, Stephen T. Johnson grew up in Kansas and lives in Lawrence. He got the idea for Alphabet City over ten years ago.

He was walking down a New York sidewalk and saw an ornamental keystone that looked like the letter S. “Then suddenly I saw the letter A in a construction sawhorse and the letter Z in fire-escapes,” he writes.

Johnson’s Alphabet City paintings are part of an exhibit at Central called Art, Language & Play. He will be conducting a kids’ workshop on Friday, April 20, at 10:30 a.m. at the Central Library (RSVP now). 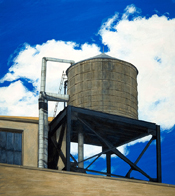 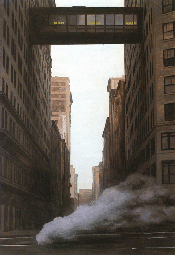 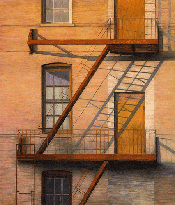 This week, we want you to fire up your imagination, grab your camera or smartphone, and head out into the urban/suburban wilderness of Kansas City to find as many letters as you can.

Maybe you’ll find an “O” somewhere in Olathe. Or an “R” in Raytown. Wherever you are, be on the lookout for hidden letters. When you find one, snap a photo and share it with us. Whoever finds the most letters by 10 a.m. on Sunday, April 29, 2012, will receive an autographed copy of Alphabet City.

This could be a great adventure to enjoy with your kids, your friends, or on your own.

Note: Letters found in signs are not eligible.

Once you’ve taken a snapshot of the letter, note the location, and do one or more of the following:

Be sure to note the location of each photo.

At the end of the contest, we’ll collect all the letters and share them on our website. We’ll also announce the winner of the signed copy of Alphabet City.

Just think, whether you win or not, you’ll have your own map of Kansas City’s unique, hidden alphabet!