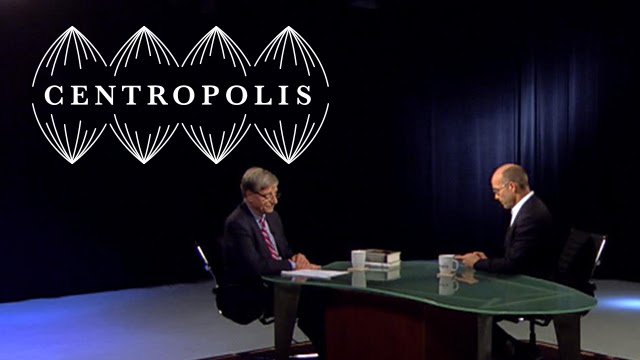 Centropolis, a new program from KCPT-TV, is an ongoing conversation about ideas, books, characters, and the absorbing issues of our times. The title comes from William Gilpin, a 19th-century mapmaker and early booster of Kansas City, who believed that civilization’s capital would be an area of greater Kansas City he called “Centropolis.”

Each week, the host of Centropolis, Kansas City Public Library Director Crosby Kemper III, and his guests explore topics ranging from current events to arts and culture. In the first episode, Mike Allen, outgoing chief political reporter for Politico, discusses Politico and his “next big thing.” Other guests include Candice Millard, author of the best-selling River of Doubt and Destiny of the Republic; Whitney Terrell, Kansas City novelist and journalist; and David Von Drehle,  TIME magazine editor-at-large.

Less than 100 days before Americans were scheduled to go to the polls, Kemper sat down with former Politico writer Mike Allen to discuss what has been one of the most extraordinary election years in our nation’s history.

Journalist David Von Drehle talks about politics, the history of media in elections, and his book Rise to Greatness: Abraham Lincoln and America’s Most Perilous Year.

Best-selling Kansas City author Candice Millard talks about her books The River of Doubt, about a perilous journey taken by Theodore Roosevelt, and Destiny of the Republic, about a medical debacle and the assassination of President James Garfield.  And she spotlights her latest book, Hero of the Empire: The Boer War, a Daring Escape, and the Making of Winston Churchill.

Whitney Terrell, an assistant professor in creative writing at UMKC, discusses his three novels The Huntsman, The King of Kings County, and his recently released The Good Lieutenant.