Whether accompanied by a big orchestra, a thundering organ, a lone piano, or even some guy with a harmonica, there was always music and sometimes even sound effects. Early movie audiences quickly came to expect it.

The Library and the People’s Liberation Big Band will recreate the silent film experience with a screening of the classic Soviet silent feature Battleship Potemkin on Tuesday May 1 at 6:30 p.m. at the Plaza Branch, 4801 Main St.

May 1 has long been known as May Day, a celebration of spring. But in the last century it was designated International Worker’s Day, which celebrates labor and left-leaning politics. The Soviets, of course, turned every May 1 into a major production of marching soldiers and flag-waving citizens.

Battleship Potemkin is right at home as part of a May 1 celebration.

Directed in 1925 by the visionary Sergei Eisenstein, the film was inspired by the real 1905 mutiny of a ship’s crew against mistreatment by the Russian navy. But while it was meant to promote the Communist cause, Battleship Potemkin has transcended its role as propaganda thanks to the audacious creativity Eisenstein brought to its telling.

The movie is regarded as a classic of world cinema and is particularly celebrated for its “Odessa Steps” sequence in which citizens gathered to welcome the mutinous crew are fired on by the Tsar’s soldiers.

Eisenstein brilliantly cut between the soldiers descending a long staircase and the chaos among the crowd below. At one point a helpless infant, its mother felled by a soldier's bullet, bounces down the steps in its carriage.

The scene is so well-known it has been imitated in other films, like the train station shootout in Brian De Palma's The Untouchables. Eisenstein takes an event that would have lasted only a few minutes and through innovative editing stretches out the tension and horror indefinitely.

Originally the film was accompanied by an orchestra score by the great Dmitri Shostakovich. Over the years many musicians have created their own music for the film.

Eisenstein had some specific instructions about the musical accompaniment for Potemkin: “The audience must be lashed into a fury and shaken violently by the volume of the sound. This sound can't be strong enough and should be turned to the limit of the audience's physical and mental capacity.”

Which means the 12 local musicians who make up the People’s Liberation Big Band have their work cut out for them. 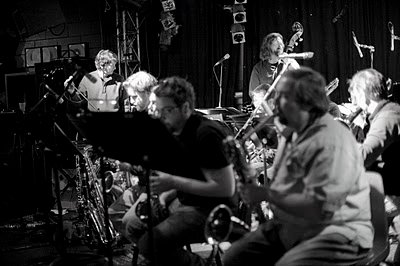 Luckily, they’ve done this before. They created a score for Battleship Potemkin several years ago, and for their library performance will use that as their road map – although there will be moments of pure improvisation.

“It’s not like we’re just winging it,” said Jeffrey Ruckman, who wrote the score with Brad Cox, Patrick Conway, and Jeff Harshbarger. “Even in the improvised parts we have a set of approved motifs to work from. You can’t just go off in an entirely new direction every time.”

His colleague Brad Cox, who plays keyboards, says he’d never even heard the original score for the film.

“From what I’ve read about it, it was kind of repetitive and dull,” he says. “But I’ve also heard it was written on a very tight deadline.”

To create a new score the four composers watched the film together and, says Cox, “called dibs on the sequences we wanted to score. I got the Odessa Steps...I called that one even before we started watching.”

Certain themes or musical passages will be repeated throughout the movie, often subtly altered by changes in tempo and instrumentation.

And, says Cox and Ruckman, audience members will hear snatches of old Soviet anthems and even the scores of popular movies worked into the mix.

The film will be shown in the Truman Forum at the Plaza Branch, with the musicians sitting on a low “balcony” to the right of the stage. From that vantage point they can see the movie while they’re playing.

“But if I have a tightly-written score I have to follow, it’s kind of strange to glance up in the middle to make sure what I’m playing is coordinated with what’s happening on the screen.

“For Potemkin we’re unabashedly mixing these two approaches. So we’re both playing in the moment and playing from the score.

“It can get a little crazy.”