Pick Your Favorite Fictional Characters for the Off-the-Shelf All-Star Team!

Each morning at 9 a.m., we’ll post a Facebook Question revealing the genre plus a few official nominations. Your job is to vote on our suggestions or write in your own nomination for other people to vote on. Who knows, maybe your favorite character could end up an OTS All-Star.

After each round is over, the contender with the most votes will be posted on the field roster the next day, along with the call for the next position’s nominations. The positions will be voted on as follows: First Base (July 1), Second Base (July 2), Shortstop (July 3), Third Base (July 4), Catcher (July 5), Outfield (July 6-8), Pitcher (July 9), and Coach (July 10).

Update: Here’s the field so far. Like us on Facebook.com/kclibrary to stay on top of the voting. 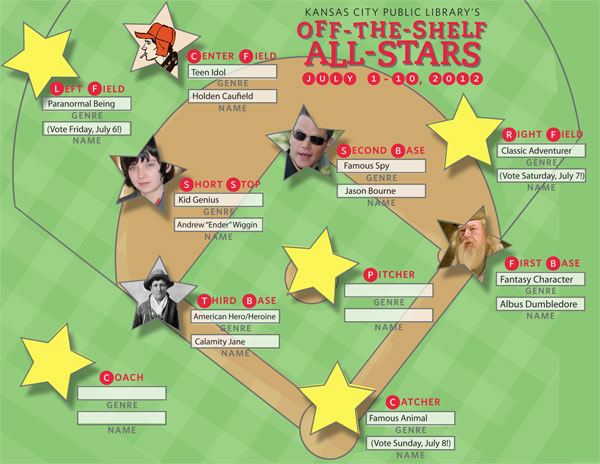 Here’s who’s been voted onto the team so far.

Get your book-ball cap on, and let’s build a team of literary giants to rival those “real” boys of summer!