It’s a famous, elemental creation story. Los Angeles, the early 1950s: Ray Bradbury sojourns to the basement of UCLA’s Lawrence Clark Powell Library armed with a bagful of dimes to bang out his now-classic lines like “It was a pleasure to burn” at ten cents an hour on a rented typewriter.

Bradbury wrote Fahrenheit 451 over nine days – approximately one-ninth the time it takes readers to blaze through the dystopian firestarter – on a dime-driven typewriter in a library basement. Bradbury described himself as a fantasy author, with 451 being his only “science fiction” book. But like most of his 11 novels and 600 short stories, the book transcends its appointed genre. It burns, it jangles nerves, it frightens, and most of all, it teaches. 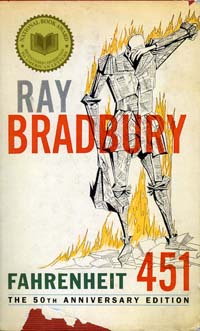 For librarians, Bradbury was perhaps above all a teacher. And not just because of the anti-censorship message at the heart of Fahrenheit. In novels like The Illustrated Man, The Martian Chronicles, and his massive catalog of stories in the speculative fiction realm, Bradbury interwove arresting lessons about human nature with stock images of rocket ships and red planets. As a result of Bradbury’s prophet-like appeal and gift for unlocking our deepest, primordial fears and desires, librarians have been among his most devoted pupils.

Bradbury’s death this past Wednesday at the age of 91 sent shockwaves through the library world. At the Kansas City Public Library, we too felt a sense of loss. Below, our librarians offer their remembrances of one of America’s most influential authors and a great friend to libraries.

Read, reflect, and share your own thoughts in the comments.

When I was in eighth grade English class, about age 14 or so, we were assigned to read a short story by Ray Bradbury – "The Drummer Boy of Shiloh." The title character was also about 14 years old. Perhaps that’s why it was assigned – maybe we were supposed to relate to him. But it didn’t work for me. I didn’t like this story at all. Even then I fancied myself a budding historian, and I wanted to read something historical about the Battle of Shiloh, one of the major engagements of the Civil War.

But in this short story, which takes place on the eve of the battle, there are no combat scenes, no great moments of heroism, no glory. Instead, it’s just a brief conversation between the drummer boy, named Joby, and another character identified only as the general, who’s obviously Ulysses S. Grant.

One of the few great aspects of growing old is that you learn to appreciate things you didn’t understand when you were younger. Such is the case with me and my feelings about "The Drummer Boy of Shiloh." I have re-read this story many times in the decades since I was in junior high school, and each time it resonates more and more. For that alone, I remain grateful that Ray Bradbury became a writer. 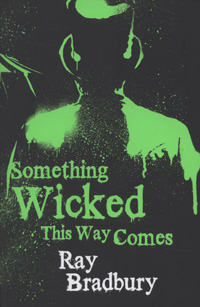 Thursday morning I listened to an NPR interview with Ray Bradbury. He died Wednesday. Bradbury was born in 1920, a month and three days after my father.

Even obviously science fiction works like The Martian Chronicles, used science fiction’s structure, not to write about technology, but to explore human relationships.

My favorites were the ones not contained by the boundaries of one genre. Dandelion Wine, The Illustrated Man, and Something Wicked This Way Comes all spill out in wild exuberance, splashing over the generic dams erected to contain them. Everything of Bradbury’s I ever read focused on people and how they dealt with each other—even if they were Martians or electric grandmothers rather than humans. 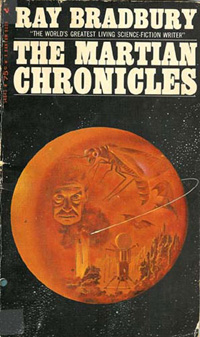 My first encounter with Ray Bradbury came in 5th grade when I read The Martian Chronicles.  It was one of those rare events in the life of my imagination that was truly revelatory!

I’d started reading science fiction two years earlier and I’d fallen in love with Golden Age, “Big Idea” hard-SF authors like Asimov and Clarke.  Bradbury gave me something completely new – SF without the Big Idea.  He put people at the heart of his stories.  He wasn’t interested in how science could change the world, but with how people would have to live in that world.  He was the first major SF author to give the genre a truly human soul.

Like many fans of SF, I want to believe that science will make the world a better place.  That it will solve problems and improve living conditions for all.  Bradbury taught me that science, by itself, can’t do anything.

People make the world.  Our choices and actions, their consequences, and the relationships we forge are the things that matter.

This lesson hasn’t always been welcome in the land of SF – but it’s always, irreducibly, important.

Embarrassing confession: I never read anything by Ray Bradbury until graduate school.  Somehow, I made it past high school and navigated an English degree without knowing anything about Bradbury besides the fact that he had written a classic novel. It took a Science Fiction/Fantasy class to finally bring me face-to-face with one of his most terrifying short stories, "The Veldt."

"The Veldt" is about a set of siblings. A set of creepy siblings.  The type of siblings that you just know speak in monotone and are completely expressionless.  A set of creepy siblings that, when faced with the possibility of having their virtual reality technology taken away from them as punishment, decide to use that technology to kill their parents and then continue playing as if nothing had happened. This story terrified me.  There I was, writing a paper about creepy kids throughout literature, and Bradbury’s spawn were the kids that gave me nightmares!

Mr. Bradbury, though I found you later in life, you still managed to freak me out like a nine year old discovering Goosebumps for the first time.  Thanks for the ride.

I am not a big science fiction fan and have not read a lot of Ray Bradbury, so I will not be able to say as much as others might on this author.  I do remember the profound effect that Fahrenheit 451 had on me (I think I read it in 6th or 7th grade).  Here was a book that proclaimed the importance of literacy to civilization, that suggested that governments might wish to keep people ignorant, and that it was possible for people to resist.  I would also say that the idea of people memorizing books so that the books could live may have helped push me into memorizing poems and stories.  I can feel that urge growing again, and I may start memorizing some of the Iliad (only parts). I can thank Ray Bradbury for showing me that memorization can be very empowering and that remembering and reading are how we keep civilization alive. 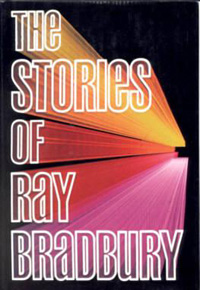 My first introduction to Ray Bradbury came from a short story that was anthologized in our sixth grade readers: “All Summer in a Day.” It has stayed with me all these years for several reasons. It was the first short story I read where children were the primary characters and adults played a very insignificant part. The children, collectively, are the villain in the story, and this was also a bit of a shock. It was also my first encounter with a type of science fiction I could relate to. There were no robots, altered chemical formulas, elaborate machinery that did unheard of things, no one had unpronounceable names, and all the vocabulary was recognizable. It was the kind of short story that gets to the heart of the terror a sixth grader can face every day.

Bradbury weaves that relatable terror into a larger narrative concerning a little girl, Margot, born on Earth, who moves to the recently colonized planet of Venus, where it rains every day except for two hours a day once every seven years. Margot remembers sunshine vividly. The other children in the class, however, were all born on Venus and have never experienced real sunshine. In the end, a petty argument has appalling consequences for one of the students.

“All Summer in a Day” is a powerhouse of a short story that comments on the brutality of children, the treatment of immigrants, and does it all deftly and in a terrifying way. (Check out the 1982 made-for-TV version on YouTube.)

Fahrenheit 451 was probably the first serious book I read, and it shaped my life for years to come. As a 13-year-old, I thought the book was about censorship and as a result that became my first crusade.

Later, when I read an interview with Bradbury explaining that the book was actually about television destroying literature, I was pushed away from television news (though admittedly not television entertainment) and toward newspapers. I would eventually get my degree in journalism and work in the newspaper industry for 15 years before joining the staff of the Kansas City Public Library.

But perhaps most importantly, the book introduced me to science fiction and fantasy and began a love affair with those genres that is still alive today.

What are your memories of reading Ray Bradbury? Share them in the comments.