James Bond is the New York Yankees of bookball. He must be. Overexposure is surely the reason the world’s greatest pop-culture spy got fed to the sharks in the contest over Second Base on the Library’s Off-the-Shelf Literary All-Star Team.

So it’s with open arms that we welcome Robert Ludlum’s whip-fast, young battering ram Jason Bourne (born: 1980) of The Bourne Identity & sequels as the spy who will come in from the cold to play Second Base.

Though he won’t have the swagger of 007 or sophistication of Smiley, Bourne will bring sheer a physical menace the other spies lack. You won’t see this second baseman skipping practice to seduce the other team’s sexy double-agent relief pitcher. Bourne means business. Let’s just hope his tendencies for amnesia don’t apply to the rules of bookball.

And now, who will accompany Famous Spy second baseman Bourne and first base Fantasy Character Dumbledore onto the infield as Shortstop for the OTS All-Stars?

There’s some short-fuse action at Shortstop. And we figure Kid Geniuses in literature see everything before it happens, including the pitch.

Which of these young brainiacs won’t let us down on the double-play? Cast your vote on our Facebook page starting at 12 p.m. today through 9 a.m. tomorrow morning!

Charles Wallace, A Wrinkle in Time by Madeline L’Engle

Or, if you don't want to vote for any of these smarties, it's easy to nominate your own. Just click the "Add an option" box in the Facebook Question and type in your own. Others can vote on your pick, too. 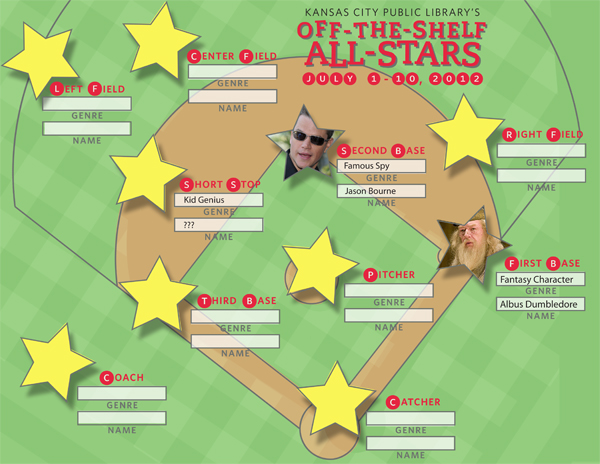 Which Kid Genius from literature will direct the defense from Shortstop on our literary All-Star team?

We’ll be recruiting our Off-the-Shelf All-Stars every day until the "real" Major League All-Star game lands at Kauffman Stadium on July 10. Be sure to like our Facebook page and use Twitter hashtag #OTSAS to follow the bookball action!

But before you vote for Shortstop, tell us: Why do you think Bourne smashed the others (especially James B.) in the race for 2B?