In our closest contest yet, Ender Wiggin won by a single vote to become the Kid Genius Shortstop on our Off-the-Shelf Literary All-Star Team. And as today is July 4, we’re asking your help choosing an American Hero or Heroine to cover Third Base.

As we rolled out of bed this Independence Day morning (a bit later than usual, as the Library is after all closed for the holiday) the Facebook vote was tied for the OTS team’s key defensive position: Kid Genius Shortstop.

Ender’s zero-g laser tag skills must have kicked in at the last minute, because a vote flew in for the interstellar prodigy just in time to end the heat before its 9 a.m. deadline. Wipe your eyes, Encyclopedia fans – there can be only one.

Elsewhere in the race, Harriet the Spy came in at second runner-up, followed by dreamy little Charles Wallace of A Wrinkle in Time. Teenage criminal mastermind Artemis Fowl made a surprise cameo as a write-in from All-Star recruiter Kim Carter. (Thanks, Kim!)

Now that Shortstop’s settled, it’s time to choose an All-Star All-American Third Baser to join Ender and previous winners Jason Bourne (2B) and Dumbledore (1B) on the Off-the-Shelf roster.

To hold down the “hot corner,” we need someone with a patriotic spirit and no fear of the bunt. Which character from American historical fiction (real or imagined) should be our Off-the-Shelf Third Base ballplayer?

Cast your vote on our Facebook page starting at 12 p.m. today through 9 a.m. tomorrow morning! The official nominees are…

Got a hero of your own? Nominate them in the slot where it says “Add an option.” We welcome any historical figure from a novel or a well-known fictional character from a novel or story with an American theme. 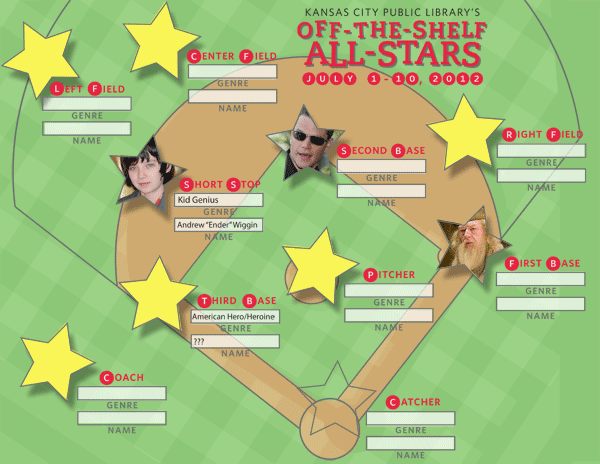 With Ender (played by Asa Butterfield) at Shortstop, we need a real American hero at Third.

Happy voting – and happy Independence Day! The Library will be open tomorrow starting at 9, when we’ll announce the winner and open the voting for our Center Fielder. By July 10, the day the MLB All-Star Game lands at Kauffman Stadium, we'll have our own team of fictional giants to rival those "real" boys of summer.