The year is 1886... and it has been eventful. In 1886, the Statue of Liberty was dedicated, Coca-cola was introduced, Geronimo surrendered at Skeleton Canyon, and Robert Louis Stevenson finished writing "Dr. Jekyll and Mr. Hyde." And, in the Midwest, Col. James Abernathy and James Lombard opened a bank.

That bank was First National Bank. It opened on March 1, 1886. The bank was successful, and quickly outgrew its first building (Junction Building - the site is now a fountain dividing Main Street), and moved to the Heist Building in 1891, an eight story skyscraper located north of the 8th Street viaduct on Main Street.

After 20 years of growth, the bank moved to Baltimore and Tenth Street on April 15, 1906. This new building cost $450,000, which included $90,000 for land. Wilder and Wight, local architects, designed the building. Thomas Wight later designed the Nelson Art Gallery.

The building was exceptional. Extensive use was made of marble in the building's interior. The president's office was finished in Camodillo mahogany from Peru, with a marble fireplace. There were also three huge columns placed outside the building. In 1905, a crowd gathered and cheered the workmen on as they maneuvered the 14-ton sections of column into place with a huge steam engine.

Additional land was purchased around the bank building in 1919, and the bank began expanding its physical properties in 1925. Soon after, in 1926 (the bank's 40th anniversary), the expansion opened. The new space housed a savings department and a safe deposit vault. 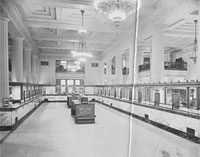 By 1964, the purchases of 1941 and 1944 had turned into an 84,000 square foot addition with two basement levels and four stories above-ground. This expansion nearly doubled the size of the bank. The fourth expansion included customer parking, escalator service, and one-floor banking. This expansion was designed to blend architecturally. The marble for the exterior came from the same quarry that supplied marble for the original 1906 building.

In 1968, the bank decided to develop the west side of the block between 9th and 10th streets on Main. This became the 20-story Ten Main Center building. The bank occupied two levels of Ten Main Center.

Soon thereafter, in 1969, bank administrators formed a multi-bank holding company, called First National Charter Corporation. First National Bank and Leawood National Bank were the first two affiliates. In the next 15 years, the corporation would acquire 27 Missouri banks and change its name to CharterCorp.

In 1976, the bank introduced the first ATM machines to Kansas City residents.

In 1985, a series of mergers began that would signal the beginning of the end for people working in the bank building. In 1985, First National Bank merged with Boatmen's Bancshares, and was renamed Boatmen's First National Bank. This created Missouri’s largest banking organization. 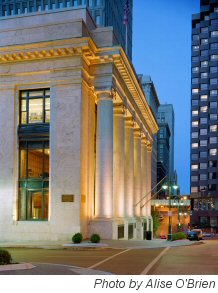 In 1999, Bank of America's Kansas City regional headquarters consolidated by moving into One Kansas City Place. A press release on the Bank of America website stated "At the present time, NationsBank will continue to own the 10th & Baltimore bank building. No further decision will be made concerning the building until after the first of the year... the older 10th & Baltimore bank building has reached the point where it would require significant remodeling costs to continue occupancy."

The building was empty until 2002, when workers started remodeling it for the new Central Library of the Kansas City Public Library.