Library’s Meet the Past Nominated for an Emmy

Kansas City might still be Tom’s town after all. 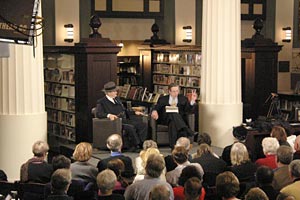 In Meet the Past, Crosby Kemper III, Library Director, interviewed historian Bill Worley in character as Tom Pendergast, infamous political boss in Kansas City and Jackson County. Pendergast’s political “machine” controlled many industries—legal and illegal—in the early and mid-twentieth century. The Pendergast regime was known for roughing up opponents and fixing elections, even hand-picking a little-known candidate named Harry S. Truman for the U.S. Senate.

Kemper credited his staff and Director of Public Affairs Henry Fortunato for the Emmy® nomination. “Henry Fortunato's brilliant idea was brought to life by many at Central. Public Affairs and our facilities staff have been recognized by the television industry,” Kemper said. “Congratulations are in order to all who played a part.”

Winners will be announced at the Mid-America Chapter of the National Academy of Television Arts & Sciences 32nd Annual Emmy® Awards Gala, Saturday, October 4, 2008, in St. Louis.