Kansas City A’s had plenty of pizzazz and some hare-raising adventures.

This year’s baseball season was delayed a few months — but it finally arrived.

As did a question for “What’s Your KCQ?,” a partnership with the Kansas City Public Library, about the Boys of Summer.

And a Bunny of Summer from long ago. Terry Stevens wanted to know more about the mechanical rabbit deployed by the Kansas City Athletics in the 1960s.

Really, there was one. His name was Harvey. 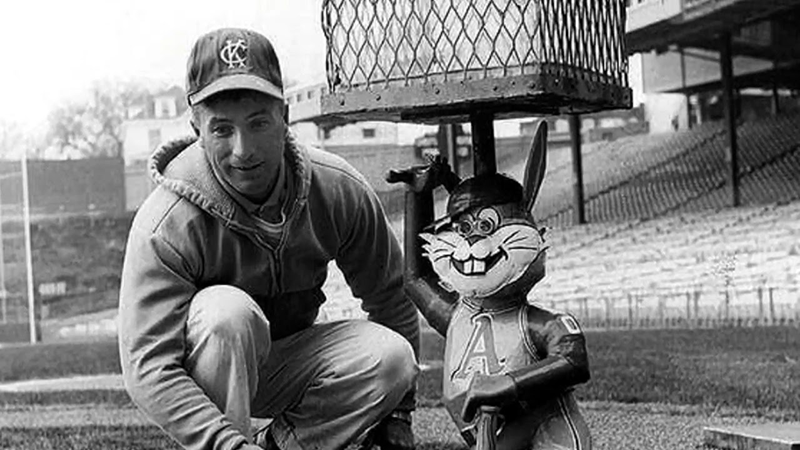 He was the brainchild of Charles O. Finley, the man who bought the franchise in 1960. Like Bill Veeck, a fellow Chicagoan and ball club owner, Finley was more showman than baseball purist.

The records prove that Finley’s Kansas City teams were woefully weak on the field. But when it came to promotional pizzazz, they could hit for the cycle.

Finley swapped the A’s elephant for a Missouri mule named Charlie O — which he often rode himself. He grazed sheep in the outfield. He moved the fences in until the league made him put them back. 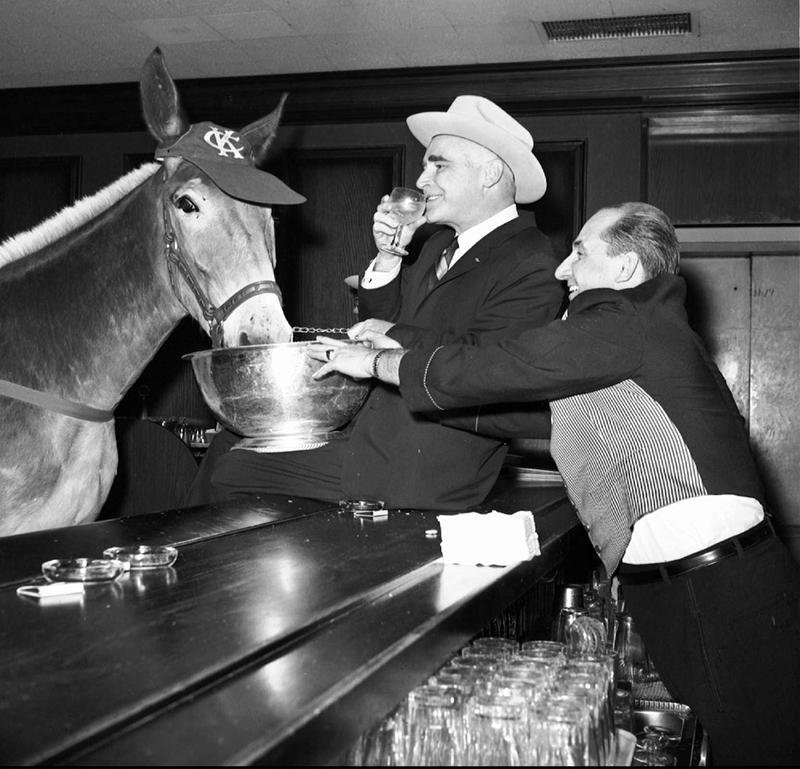 The exuberant owner outfitted his team in green and gold (and later white shoes), created a petting zoo in left field and signed Satchel Paige to pitch three innings at age 59. Oh yeah, he also booked the Beatles!

But maybe nothing Finley devised was as fun and functional as Harvey — named after the movie starring Jimmy Stewart and an invisible rabbit. 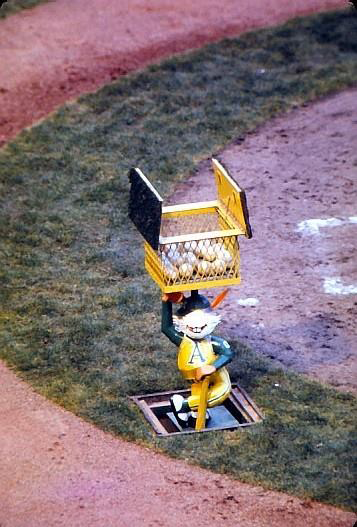 Harvey, who appeared to be Bugs Bunny’s kooky cousin, periodically emerged from the ground behind home plate bearing a basket full of baseballs for the umpire. N.d. | Jeff Logan

Our Harvey, who appeared to be Bugs Bunny’s kooky cousin, periodically emerged from the ground behind home plate bearing a basket full of baseballs for the umpire. And his eyes flashed with glee while the organ played “Here Comes Peter Cottontail.”

According to A’s (and later Kansas City Royals) groundskeeper George Toma, the rabbit was crafted in 1961 by a local elevator company. An engineering marvel to be sure, but Harvey wasn’t fully automated. 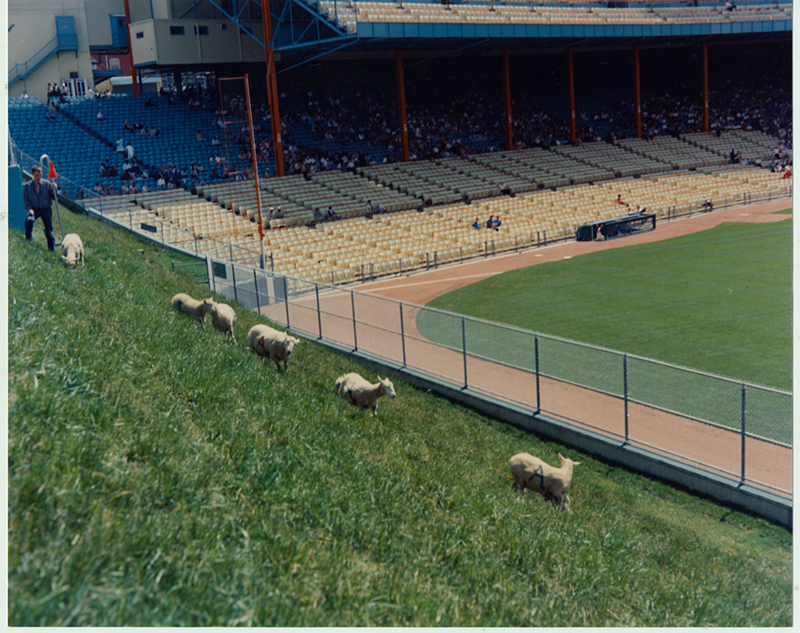 Charlie O. Finley had Green-and-gold-dyed sheep grazed in the outfield.

As Jeff Logan, President of the Kansas City Baseball Historical Society points out, “Somebody had to stock the basket… fill it with baseballs. In those days, it wasn’t all new balls either.”

Logan also remembers small air jets that were installed around home plate for hands-free dusting. Very Space Age and less work for the ump. Kids loved it all. 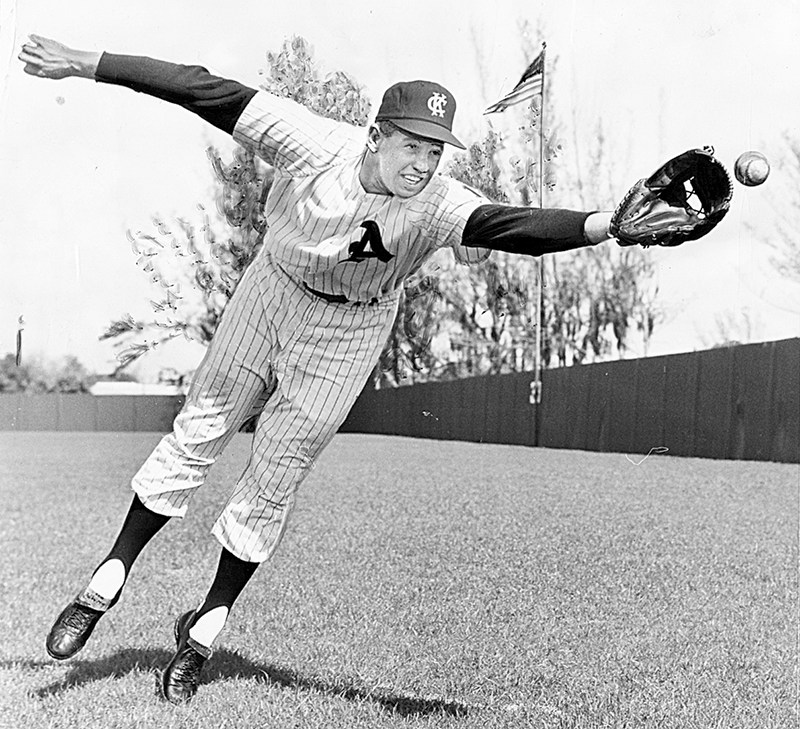 Springfield native Jerry Lumpe played for the As during 1959-63, including his best offensive year in 1962. | The Star

But despite the hoopla, the club’s struggles continued. After the 1967 season ended, Finley and the A’s headed for California. Charlie O and Harvey went along, as did the nucleus of the Oakland teams that went on to win World Championships in the 1970s.

The rabbit didn’t last long enough to see them. According to an article in the San Jose Mercury-News, he was decommissioned in 1971 due to electrical issues, and laid to rest under the Oakland Coliseum. But in 2018, the A’s did unveil an updated, motorized version they dubbed Harvey, Jr.

Which brings us to a question that’s been asked for years. Might one of the original mechanisms have been left behind here?

Logan has heard the stories. After all, when Municipal Stadium was razed in 1976, much of the debris was simply plowed under and the site filled in with dirt. 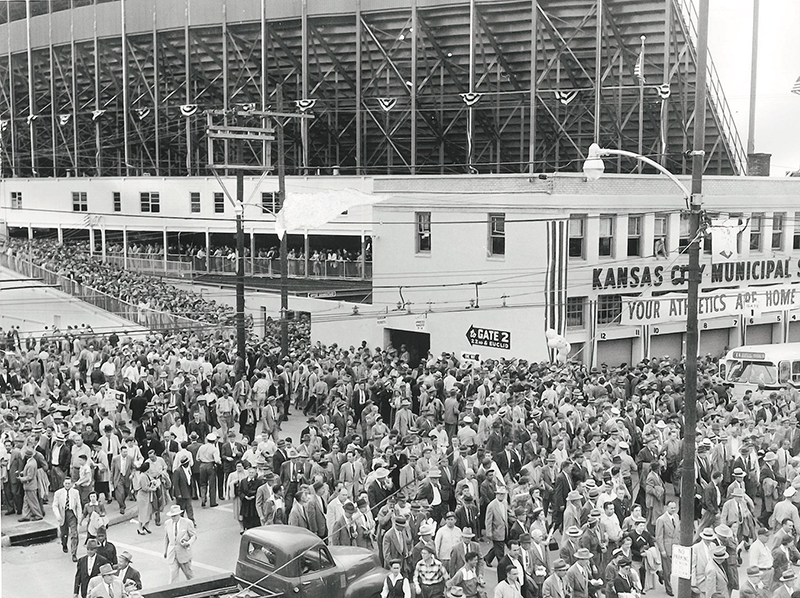 More than 32,000 fans turned out on April 12, 1955, to see the Kansas City Athletics in their first game here. The ball team had moved to Kansas City from Philadelphia. President Harry Truman, two years out of office, threw out the first pitch. This was the scene at Municipal Stadium at 4:55 p.m., 15 minutes after the game ended (the A’s beat the Detroit Tigers). | The Star

For decades after that, the land near 22nd & Brooklyn stood idle. But recently a small subdivision has begun to grow there. And each time the foundation for a new house goes in, pieces of the past — chunks of concrete, seats and signage — come out.

Still, Logan concedes it’s a long shot — noting that the Royals, who played their first four seasons at Municipal, would almost certainly have purged any remnants of a left-behind bunny.

Plus, he said, if someone did manage to snag an original Harvey, “Wouldn’t we see a picture? Why would someone hide it?”

KCQ concurs. But you can’t blame us for holding out hope.