Books + Music + Movies + Digital
Events + Classes + Activities
Research + Resources
Kids + Teens
The Central Library will be closed on Saturday, August 8, due to HVAC issues.
In compliance with Kansas City's recent citywide order, masks must be worn by everyone visiting our locations. Get the latest updates on the Library's COVID-19 response here.

One of the most significant occurrences in Kansas City's leap from a country town to a thriving metropolis was the building of a permanent public library. 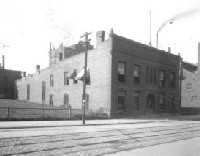 Established in 1873 as the Public School Library of Kansas City, the institution became a cultural center for the city, providing not only educational resources, but an alternative to other downtown entertainment establishments of the time. In addition, the Library enhanced the image of Kansas City as a community that was civilized and cultured, which was attractive to East Coast promoters offering financial support to Kansas City's then-fledgling economy. Although hopes were high, the Library endured a humble beginning. Its first collection consisted of a set of American Encyclopedia placed within a single oak bookcase (both of which are still retained in the Library's holdings).

In 1889, the organization moved into the first building in Kansas City dedicated solely for library use. 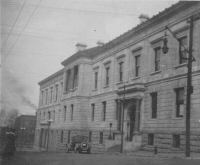 Located at 8th and Oak Streets and built at a cost of $10,000, the building was a simple store front that the Library quickly outgrew. In less than 10 years, the Library acknowledged the need for a larger facility and began a new building at 9th and Locust Streets. At a cost of $200,000, the new location opened its doors in 1897. The building was both an economic and architectural achievement for the Library. Complete with a grand rotunda and reference rooms donning murals and framed paintings, the location was an artistic inspiration, providing the Library with badly needed room for its ever-expanding collections and public services.

At 9th and Locust, the community witnessed two important events for the Library and Kansas City as a whole. The first occurred in 1898, when the Library was made free and open to all people, regardless of social or economic status. The second occurred in 1901, when William Rockhill Nelson presented a collection of pictures from the Western Gallery of Art to the Library, which the board renamed the Nelson Gallery of Art. Later, the art gallery would separate from the Library system into its own entity, eventually becoming The Nelson-Atkins Museum of Art.

By the late 1950s, the 9th and Locust facility was again too small to meet the Library's needs. 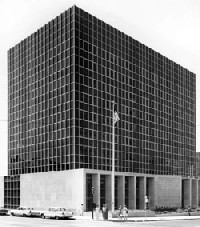 In 1960, it moved to a newly constructed "space age" facility at 311 E. 12th St., which it shared with the school district. By the 1980s, it became clear that the Library system could better serve the public, and better align itself with other metropolitan library systems, by separating from the school district. In 1988, this move came to fruition and the Library established itself as an independent taxing authority.

During the 1990s, Library administration became aware that it was time for another change in location for the Main Library. The 311 E. 12th St. facility, which it leased from the school district, was in a state of disrepair and the collection had once again outgrown its surroundings. In 1999, plans developed to relocate to the former First National Bank building at 10th and Baltimore. The century-old building, a true masterpiece of craftsmanship with its marble columns, bronze doors and ornate mouldings, required remodeling and a fifth floor addition, but provided the framework for a modern and impressive urban library.

Through a public-private partnership headed by the Downtown Council, and utilizing funds from federal, state and municipal sources, corporations, foundations, individuals and the Library district itself, the Library raised the nearly $50 million needed for the project. As a result, the new Central Library opened its doors in 2004. The location features state-of-the-art technology, improved and increased services, meeting rooms, a screening room, a coffee shop and much more, all within the walls of a building originally constructed to convey a sense of strength and continuity. It is upon that foundation the Library places its vision for the next century to come.