Loose Park walkways were once covered in nylon fabric. A stroll with KCQ answers why 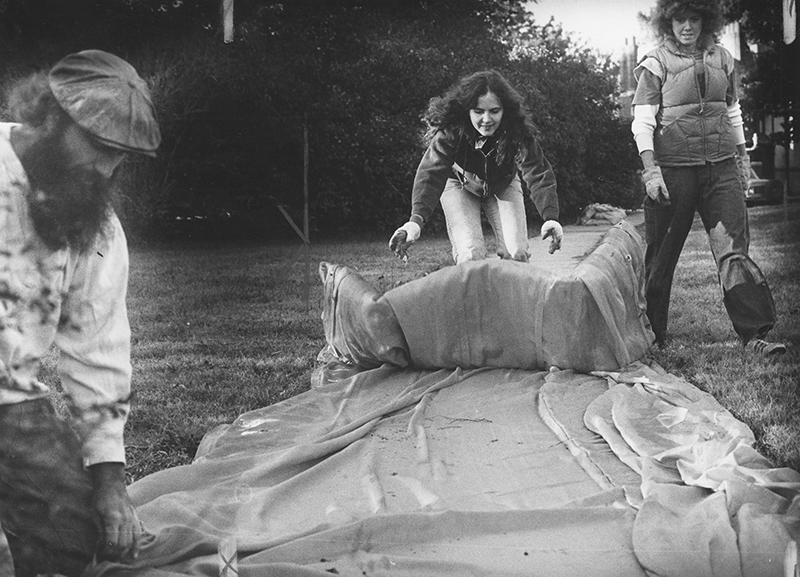 LEAD IMAGE CAPTION: On Oct. 16, 1978, Cathy Dwigans rolls up the nylon of Christo's Wrapped Walk Ways in Loose Park in the final step of the Bulgarian-born artist's project. | The Kansas City Star

This edition of “What’s Your KCQ?” was prompted by current events.

On May 31, the internationally renowned artist known as Christo died at the age of 84.

The next day Paul Akin asked KCQ, a collaboration between The Kansas City Star and the Kansas City Public Library, if we might recap the ambitious project that brought him to town 42 years ago.

In 1978, the Bulgarian-born Christo was by all accounts a fast-rising star in the art world. Early in the decade, two monumental installations, the Valley Curtain in Colorado and the Running Fence in California, generated plenty of headlines and notoriety.

With a push from art dealer Myra Morgan, the Kansas City Society for Contemporary Art reached out to Christo and his wife, Jeanne-Claude, about the possibility of making something sensational here.

John Hoffman, an art collector and member of the organization, recalls that Christo scouted several possible sites, including the Nelson-Atkins Museum and Union Station, before deciding on Loose Park. Christo felt its layout was well-suited to completing an idea he’d nurtured for several years.

That idea would become “Wrapped Walkways, Loose Park.” Like the name implies, Christo planned to cover all 2.7 miles of the park’s sidewalks and bridges with nylon fabric in a shade he called saffron. 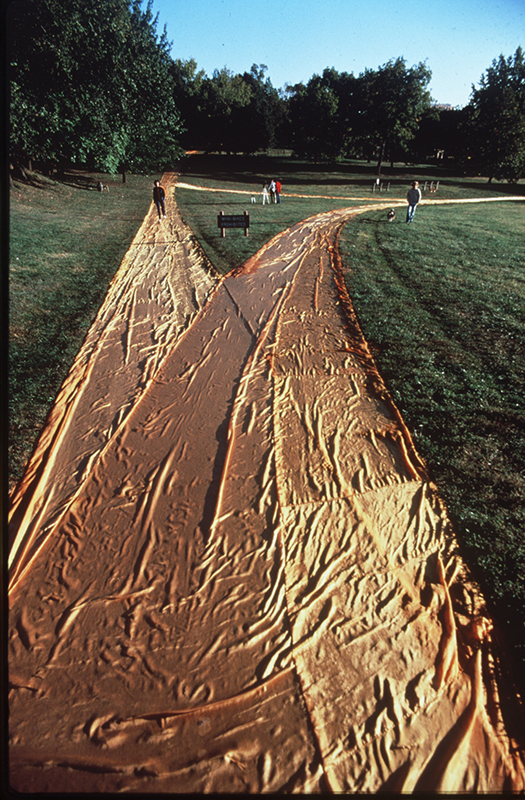 Once satisfied that the work would pose no hazard to the public, the Kansas City Parks Department signed off on Christo’s vision as a two-week “exhibition.”

Sewing quickly began in West Virginia on the 135,000 square feet of fabric needed for the task. The rest was finished on site by 13 seamstresses with portable sewing machines. They were part of a production team augmented by 67 volunteer laborers and 13 construction workers headed by local builder Augie Huber.

Despite the intensity of orchestrating such a major undertaking, Hoffman describes Christo as “quiet and pensive… a stickler for detail.” He ate with the workers, Hoffman says and didn’t appear to seek recognition for himself.

“Wrapped Walkways” opened as scheduled Oct. 4, 1978. Newspapers from around the world wrote about it. Photographers and TV crews descended. Heck, Charles Schultz even had Snoopy muse about it in “Peanuts.”

In a short film made by Johnson County Community College, an impressive cross-section of people in equally colorful 70s fashions, stroll, jog and gaze down at the gold-toned ribbons beneath their feet. Some refer to it as “beautiful, “fun” and “a joy.” One woman said it reminded her of “molten copper.”

Others seem less convinced—tossing barbs like “contrived, “a piece of junk,” and questioning whether the money - the final cost was estimated at $130,00 - might have been better spent elsewhere. 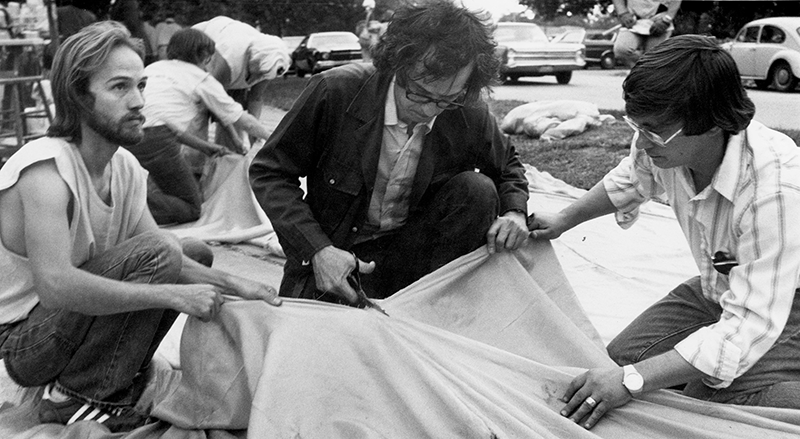 But remember, no sponsorships were sold. As with all their projects over the years, Christo and Jeanne-Claude bore the costs themselves, funding the work through the sale of drawings, photos and lithographs.

When the display was done two weeks later, the fabric was given back to the city to use or distribute for souvenirs.

Years later, Christo told biographer Burt Chernow that even in a career that spawned an amazing number of major installations all around the world, “Wrapped Walkways, Loose Park” remained one of his favorites.

While it is less well known than many of their others, Jeanne-Claude explained that because “there was no controversy” over it, “no battle in the courts,” many may have missed one of their “most exquisite works.”