Post date:
Thursday, May 30, 2019
Amid the infighting, flesh pressing and delegate swapping of our country’s last contested political convention – the Republicans’ Ford-vs.-Reagan runoff in Kansas City in 1976 – British illustrator Ralph Steadman roamed Kemper Arena and the surrounding West Bottoms for his own inimitable take on American history.

You might know the name. If not, chances are you’d recognize the distinctive lines and ink splatters that mark Steadman’s art, in particular his exquisitely grotesque drawings for Fear and Loathing in Las Vegas and other works by gonzo journalist Hunter S. Thompson.

Steadman had another collaborator of note in Kansas City, covering the convention for Rolling Stone magazine with former White House counsel and Watergate figure John Dean. Dean wrote a first-person piece, “Rituals of the Herd.” Steadman produced a series of characteristically off-center illustrations ranging from horned delegates being herded, cow-like, into a stock pen to a lone, sign-toting demonstrator looking through a chain-link fence at a couple of dour law-enforcement types, billy clubs hanging prominently at both of their sides.

Those images are among more than 100 original works featured in a special touring exhibition, Ralph Steadman: A Retrospective, filling the downtown Central Library for more than three months this summer. The collection will occupy both formal art galleries and spill into the first-floor grand foyer, Kirk Hall, from June 1 to September 8, 2019.

The Kansas City Public Library is one of a limited number of venues nationwide chosen to host the exhibition, which spans Steadman’s career of more than 60 years. His drawings from the ’76 convention – about a dozen of them – are being shown only in Kansas City. 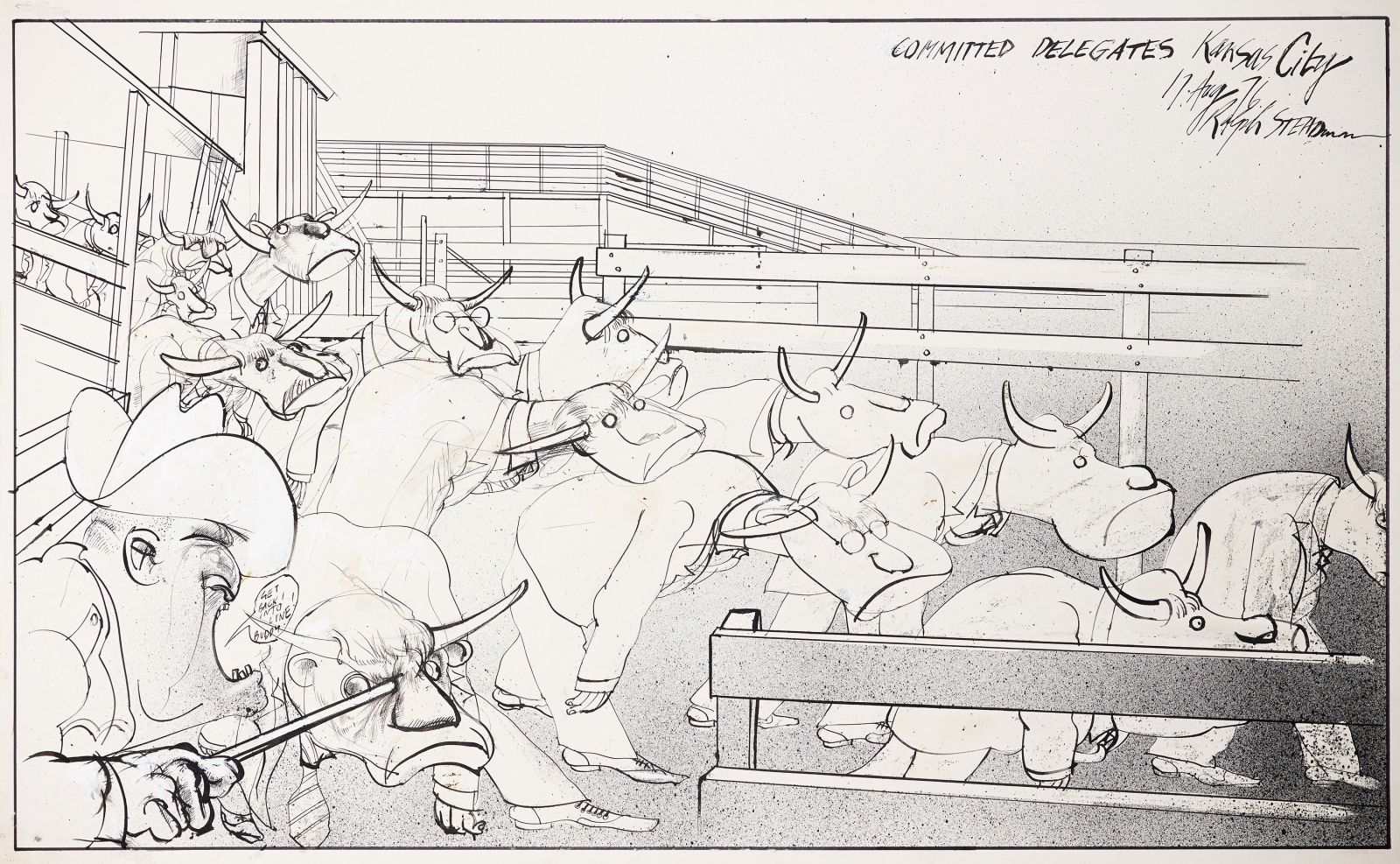 
“We’re beyond thrilled, especially with the opportunity to give Kansas City an exclusive look at Ralph Steadman’s work from such a seminal moment in the city’s history,” says Anne Ducey, the Library’s exhibits director. “His range is so broad. He’s probably best known for his collaboration with Hunter S. Thompson, but he also has illustrated literary works such as Treasure Island and Alice in Wonderland and has written memoirs and children’s books.

“I don’t know if there’s a better place than a public library to celebrate his work and his life.”

Steadman, 83, rose to prominence with his illustrations for a piece Thompson wrote on the 1970 Kentucky Derby for Scanlan’s Monthly – later heralded as the beginning of gonzo journalism. Fear and Loathing in Las Vegas: A Savage Journey to the Heart of the American Dream was released a year later. The unlikely friendship between artist and writer lasted more than three decades, until Thompson’s death in 2005. 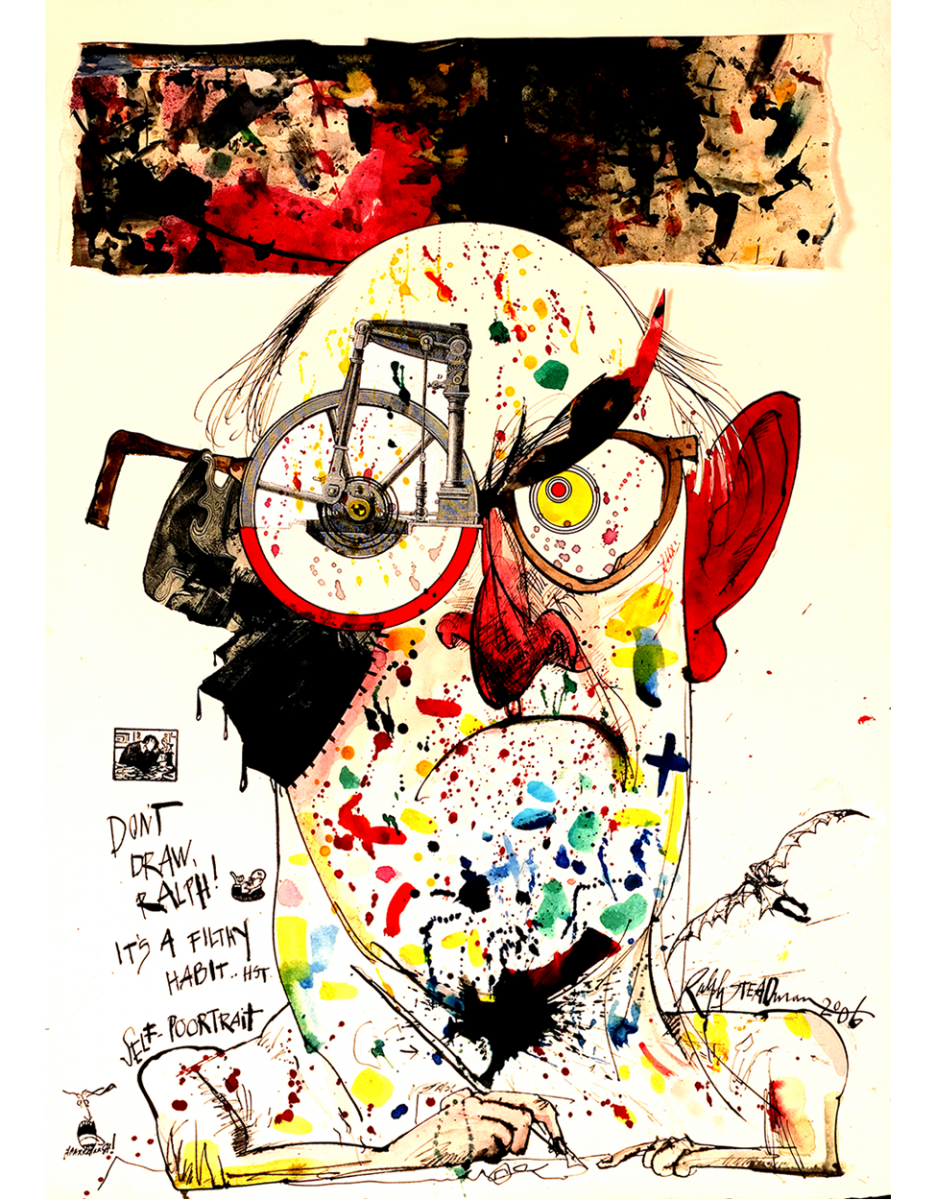 Don't Draw, Ralph, It's a Filthy Habit - Self Poortrait 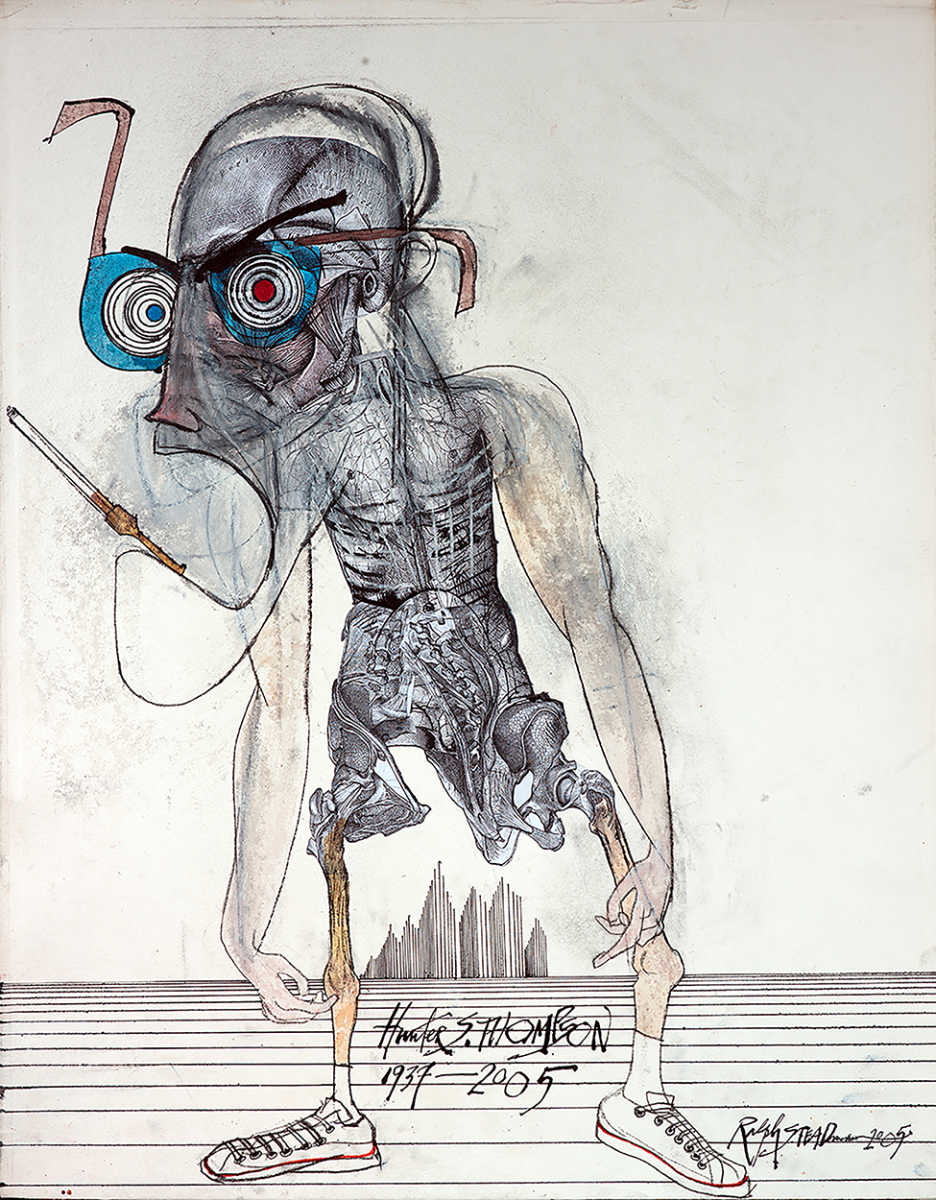 Drawings from the Derby and for Fear and Loathing are included in the retrospective. So are Steadman’s earliest published cartoon in 1956; his work for Private Eye, Punch and Rolling Stone magazines; images of extinct and imaginary birds created for his book Extinct Boids; a selection of scathing political cartoons; and drawings inspired by television’s Breaking Bad series.

It has been more than 14 years since Thompson took his life at his home in Woody Creek, Colorado, and he remains central to Steadman’s thoughts and psyche.

“I wrote a book, The Joke’s Over, about it. And in a way, it was over. When that happened, I just felt part of me went with him,” says Steadman, who lives with his wife and continues to work in Kent, England. “I didn’t appreciate the fact that he’d done that, left me high and dry, as it were. We hadn’t done all that we were going to do.

“I think he’d be quite interested to know how much he’s still remembered and how much people think about him.”

Steadman is leaving his own imprint – as his sprawling retrospective underscores. 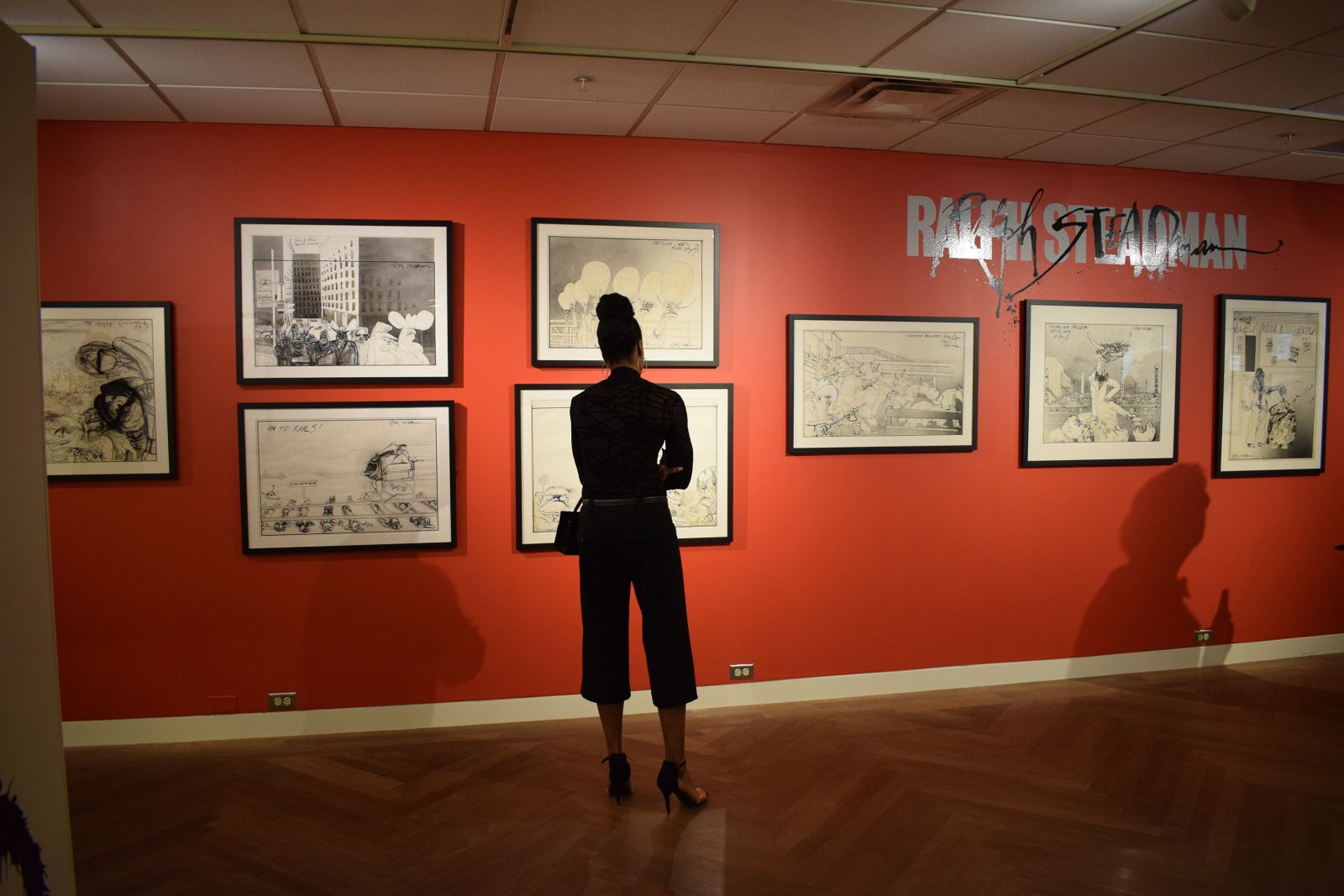 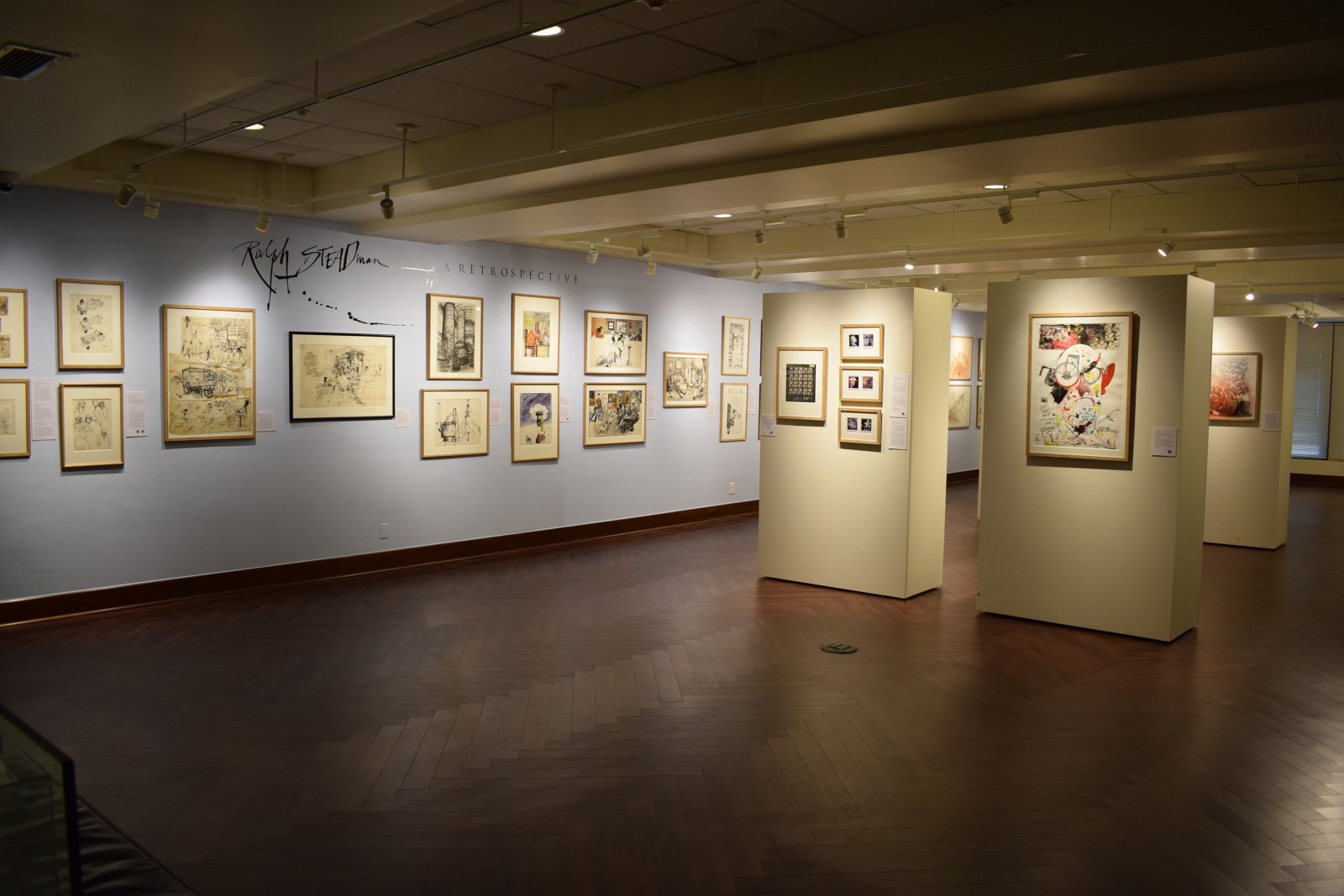 
A version of this story, written by the Library’s Steve Wieberg, appears in the May-June edition of KC Studio magazine.