"Good As Gold" Sculpture at the Plaza Branch

The Plaza Branch of The Kansas City Public Library has a sculpture, titled “Good As Gold,” created by internationally known artist, Donald Lipski.

The 500 pound sculpture was installed on August 2, 2005 and Mr. Lipski attended the installation and presented informative slides while he discussed his body of work, as well as the Plaza's sculpture. 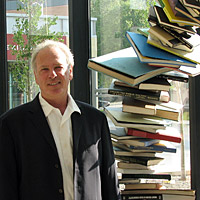 Donald Lipski with Good As Gold
“Good As Gold,” purchased at a cost of $34,000, stands eight feet high and is a continuous loop of books resting on steel feet. Holes drilled into the books were strung like beads onto a steel bar. Lipski stated that the project took “two to three months” from inception to completion.

Most of the books looped into the sculpture came from the Book Barn in Bridgehampton, New York and were selected by Lipski based on size, color, and subject matter. As a special addition, a few books at the base of the sculpture are withdrawn items from The Kansas City Public Library's collection.

The title of the sculpture in named after author Joseph Heller's novel “Good as Gold”.  Heller, both neighbor and friend to Mr. Lipski has a book spine on the Central Library's Community Bookshelf at 10th and Baltimore in downtown.  Lipski was delighted to see Heller's famous work Catch-22 displayed on one of the twenty two book spines. 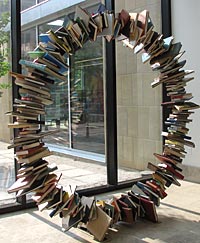 During the August 2 presentation, Mr. Lipski weaved in and out of stories tying together his life, artwork, political beliefs, and everyday observations. “I used to live at 14 W. 10th Street (also the Central Library address), but in New York,” noted Lipski. The building at that address in New York had a plaque on it stating Mark Twain had once lived there, but was “kicked out because he couldn't pay his rent.”

Lipski's use of books as an artistic medium has a long history. One of his earliest memories was of his father calling him (on the phone) and asking him what he was doing. “Folding New York phone pages in half,” he replied. After a pause his father suggested that he “start with Akron, Ohio and work your way up.” Lipski began his series of book sculptures by incorporating books with other materials.  He then reached a point where he decided to focus on books alone as the raw material. Expressing a fascination with the paradoxical nature of these sculptures, Lipski noted the fragility of the individual books and the enormity of weight in a completed piece.  He also joked that he likes working with books because it would make people think he was smart. 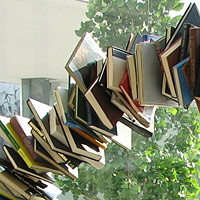 “Thinking up ideas,” “solving a problem” and “watching something new and unexpected” are what drive his creative energies, shared Lipski as he wrapped up his discussion at the Plaza Branch.  One audience member commented, “It is wonderful to be in the presence of someone who is truly creative.”

Donald Lipski has works in the permanent collections of museums around the world, including the Whitney Museum of American Art and the Metropolitan Museum of Art. Among his most notable exhibitions was a one person exhibition at the Museum of Modern Art. He has received numerous awards, including a Guggenheim Fellowship and the Academy Award of the American Institute of Arts and Letters.

The “Good As Gold” sculpture, now part of his legacy in Kansas City, is on permanent display in the foyer of the Plaza Branch at 4801 Main Street . It was the first work of art to be purchased from the Art Fund that was established by Action of the Library Board of Trustees on October 21, 2003 (Memo No. 2969). The fund was established with proceeds from the sale of Indiana Village, oil on canvas, by T.C. Steele.