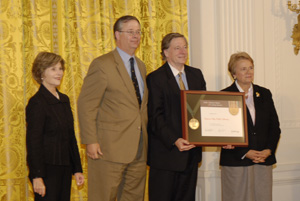 Each year, the federal Institute of Museum and Library Services (IMLS), in coordination with the White House, presents the National Medal to five museums and five libraries that have helped make their communities better places to live. Each winning institution also receives a $10,000 award.

The Kansas City Public Library received the award for its Books to Go project, which delivers books monthly to more than 7,000 preschool-aged children through Head Start programs and other similar venues; its extensive menu of monthly special events featuring presentations by historians, novelists, economists, and journalists; and its kid-friendly Once Upon a Time exhibit and related programming that took place in winter 2008.

The Kansas City Public Library strives to serve its community by promoting reading, bringing together community cultures, and bridging the digital divide, and in so doing, has created an ideal place for Kansas City residents to gather, work, play, and learn.

“The Kansas City Public Library is honored to be selected as a National Medal library by the Institute,” said Crosby Kemper III, director of the Kansas City Public Library. “This recognition reinforces our vision and commitment to inspire our patrons and the community to the highest level of aspiration in knowledge, personal development, and preservation of our heritage.”

“It was my great honor to nominate the Kansas City Public Library for this award,” said U.S. Representative Emanuel Cleaver, II (D-MO). “Through their efforts they have let loose imaginations, inspired change and become a cornerstone around which our entire community gathers. A city can only be as good as its public libraries, and we all take pride that ours is among America’s very best. My sincere congratulations to Crosby Kemper, all his staff, volunteers and supporters.”

“By its example, the Kansas City Public Library shows us the kind of influence and impact that libraries can have on community life. Through its innovative programs and active partnerships, the Library addresses the urgent and changing needs of the community it serves,” said Anne-Imelda M. Radice, former IMLS Director.

The Institute of Museum and Library Services is the primary source of federal support for the nation’s 122,000 libraries and 17,500 museums. The Institute's mission is to create strong libraries and museums that connect people to information and ideas. The Institute works at the national level and in coordination with state and local organizations to sustain heritage, culture, and knowledge; enhance learning and innovation; and support professional development. To learn more about the Institute, please visit www.imls.gov.