A Year After Library Levy Passes, We Look to Our Next Chapter

A lot has happened at your Library in the past twelve months.

One year ago, voters overwhelmingly approved an 8-cent increase in the Library’s property tax-based operating levy – the first adjustment to the rate in 22 years. Thanks to that support and funding, the Library has been doing even more for the people we serve, working towards fulfilling commitments made during the levy campaign.

As the Library broadens its services and responds to growing community needs, we want to keep the public informed about progress – about the upgrades and modernization implemented and offered in what we call the Library’s Next Chapter.

From expanded operating hours and new resources and programs that help individuals achieve personal or professional goals to major capital improvement projects, including the renovation or replacement of Library buildings, a number of plans are in the works. We are sharing project progress along the way; at kclibrary.org/NextChapter, you can keep tabs on what's happening at your neighborhood Library location, or see what kind of new or expanded services become available throughout our system.

New and exciting things will be happening at the Library in the coming years. Know that you – our community – made these Next Chapter projects possible and and that we appreciate your support.

EXPLORE OUR NEXT CHAPTER

Library Makes Use of New Levy Funds:  ‘This Allows Us to Evolve With the Community’

Sometime in early 2020 – as early as January but maybe closer to spring – the Kansas City Public Library will begin a $3.5 million, inside-and-out makeover of its 30-year-old North-East Branch, among other things making it the new home of the Library’s pioneering outreach to area immigrants and refugees.

It hopes to wrap up by late 2020. Then, the Library can turn to an even bigger project: the renovation or outright replacement of its undersized and crumbling Waldo Branch.

A year after voters approved the first increase in KCPL’s operating levy in 22 years, the impact is being felt across its system as Library Director Crosby Kemper III and Library staff roll up their sleeves and put the new funding to use. Capital projects are no small part, shoring up facilities that, in many cases, are a quarter of a century old or more. 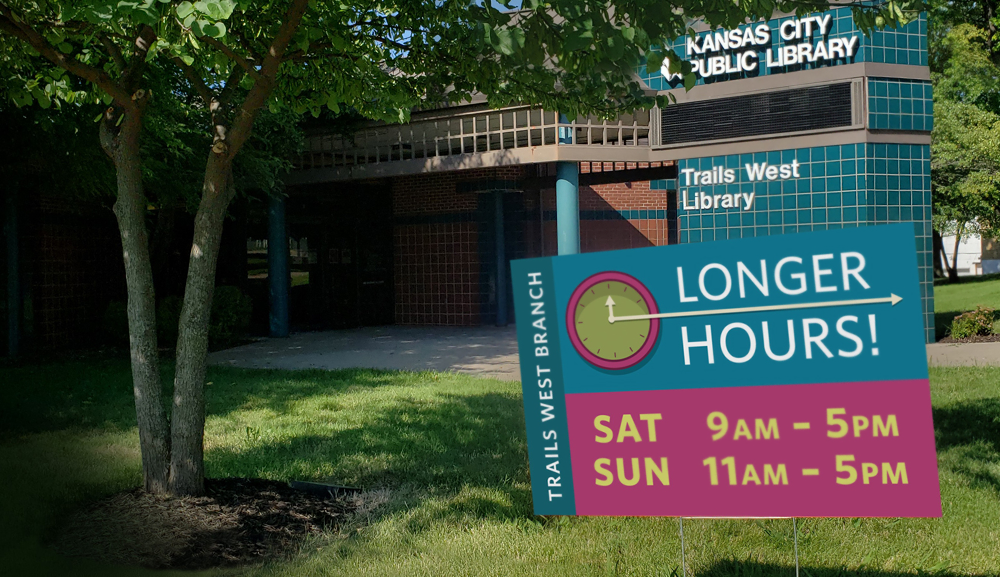 Library locations are now open longer, thanks to more funds and resources made available through voters' Nov. 2018 levy approval. 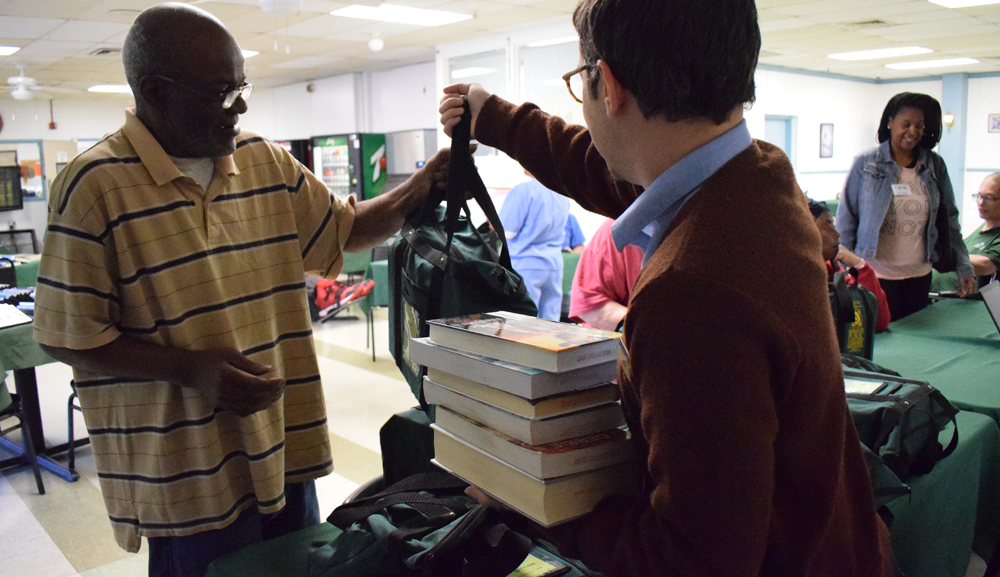 Plans are underway to expand our current Outreach mobile services for seniors, families, veterans, schools, and early childcare centers.
Programs and services are being added and enhanced, including a “bold expansion” of mobile and outreach services that will take more of the Library’s initiatives – from computer training to health and nutrition guidance – on the road. They’ll target marginalized neighborhoods and populations in particular.


The Library will fortify its award-winning evening programming, building on partnerships with the Lyric Opera, Kansas City Ballet and other cultural institutions, Kemper says. It will think even bigger on the exhibits that rotate through the two formal art galleries in the downtown Central Library.

Two moves earlier this year are among the most far-reaching. Operating hours were expanded, giving patrons an additional 29 hours of access a week across the Library’s 10 locations. And daily fines for overdue books and other materials were eliminated. The latter, it’s hoped, will remove a burden that can discourage many from coming into the Library.

“It’s huge,” Kemper says of the overall implications of the 8-cent levy bump. “The community’s needs and the Library’s capacity and focus are things that have dynamically changed over the last couple of decades. This allows us to evolve with the community, to help with its 21st-century needs.”

Mary Olive Joyce, KCPL’s director of library Outreach and Community Engagement, says the success of the November 2018 ballot measure “granted us the opportunity to reimagine how the Library will deliver services for generations to come.”

Kansas City and Jackson County voters were remarkably supportive, giving the levy measure 83% approval. Initial projections indicate that the increase will generate an additional $3.1 million annually, beginning with the dispersal of 2019 tax revenues late this December.

The Library’s overall operating budget is about $24 million. 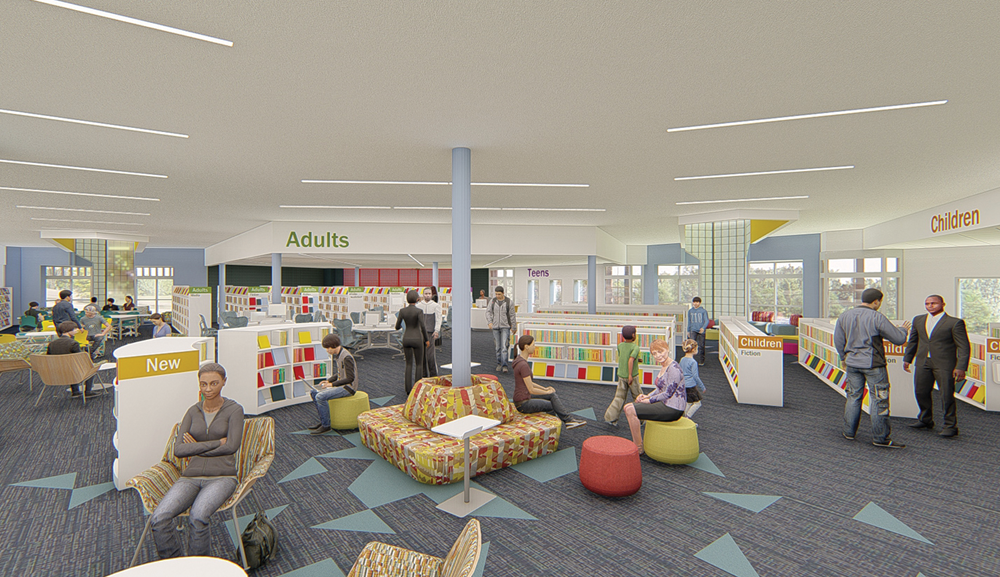 Renovations planned for Library's North-East Branch will rely on both private funding as well as public financing. (image courtesy The Clark Enersen Partners) 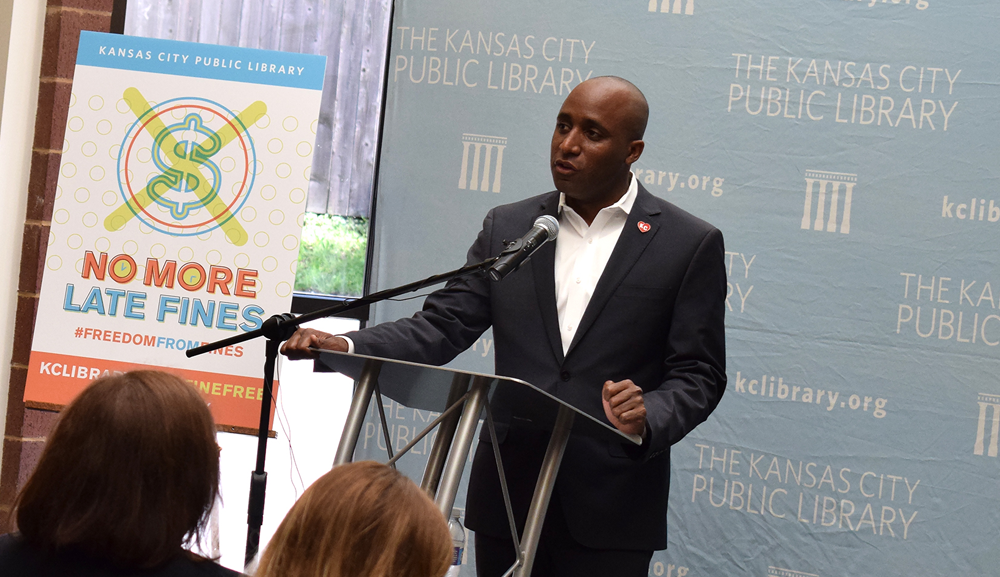 Mayor Quinton Lucas speaks at the Library's press conference announcing the elimination of daily late fines.
The complete interior and exterior renovation of the North-East Branch was in the planning stages at the time of the levy vote. That Library location, just off Independence Avenue, has long anchored one of Kansas City’s most immigrant-rich, culturally diverse neighborhoods, and is seen as a natural headquarters for KCPL’s Refugee & Immigrant Services & Empowerment (RISE) program. The new blueprint includes classroom space devoted to citizenship test preparation and language classes.

Kemper and others are still plotting the Library’s approach to its Waldo Branch, which was built in 1988 and now faces significant structural deterioration. It’s also too small to meet community demand. The Library will make a call on whether to keep and redo the current site or build nearby by next summer, Kemper says, and plans are to open a refurbished or new facility in 2021 or 2022.

Both the North-East and Waldo projects will rely on private as well as public financing.

•    Ambitious plans for expanding Library outreach include the appointment of a new mobile library services manager and purchase of both a new, specially equipped senior services vehicle and a second van offering a sort of modern take on the old bookmobile. Yes, it will carry books. But it also will deploy KCPL’s growing array of resources focusing on such areas as health and wellness, financial literacy, and job assistance. Stop-off points could range from veterans’ centers to homeless camps.

•    New operating schedules keep the eastside L.H. Bluford and Southeast branches open two hours later on Fridays, until 7 p.m., in part to give youth a place stay and engage. The Library also is weighing programming there akin to current Friday Night Family Fun activities at the Plaza Branch.

•    The Library’s Missouri Valley Special Collections – its history department – is launching a program designed to enhance students’ research experience, offering video tutorials, pointing them to less-familiar databases and, perhaps down the road, drawing up lesson plans revolving around some of the MVSC’s historical collections. A new education and outreach librarian came on board in April.

•    More people will be able to take in KCPL’s popular signature speaker programming, which last year drew nearly 24,000 people to the Central Library and Plaza Branch. A new videographer is recording many of the events, making them accessible on the Library website.

This piece originally appeared in the November 2019 edition of KC Studio Magazine.